Background and Mask not showing in Builder with Fusion

You must be using the Fusion tab in Resolve, which is not fully functional. It works the way you expect in Fusion Studio.

Yes, I am. If it works as a standalone, that would be great! However, I’m wondering a couple of things:

Fusion Studio is another product Blackmagic Design sells separately from Resolve. It is a standalone node-based compositor, and AFAIK requires purchasing a USB hardware key. It is not so tightly integrated with Resolve as the Fusion tab, but is powerful, and in Fusion Studio, S_Effect works the way you expect. Here is a screen shot of Fusion Studio that mimics what you described, with BIKER as Source, NIGHTSCAPE as Background, and a WipeLine node in S_Effect to combine them: 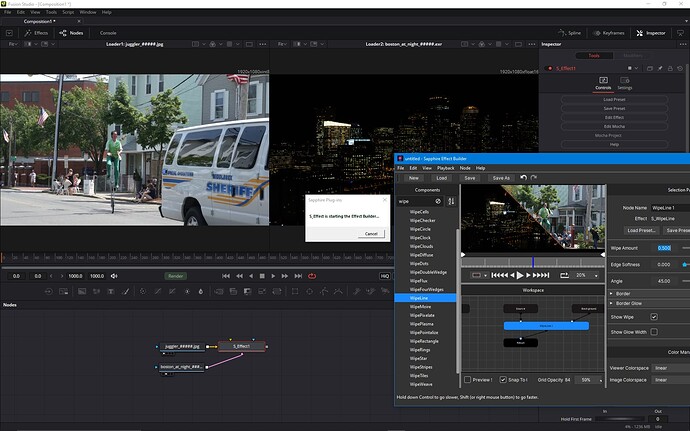 Here’s a quote from the Resolve manual describing how to export the composite, which could then be imported to Resolve:

Just like the Fusion Page in DaVinci Resolve, you add effects using different nodes from

the Effects Library, and you combine multiple layers of imagery using Merge nodes. Once you’ve

created the desired result, add a Saver node to the end of the tree of nodes you’ve created to render

So for simple composites, the Fusion tab in Resolve should be adequate, but if you want to get fancy with S_Effect you may be glad to have Fusion Studio on hand. It could be worth the money and trouble of reimporting each change, but I’m just a plugin developer and can’t make that call. Perhaps another community member can weigh-in with a production opinion.

Thanks for the info. I just started playing around with it and it seems to work a lot better (great, I just jinxed it LOL). I contacted Blackmagic support and they told me to just use the same product key as Resolve Studio. So basically, it was free, and another reason I love BMD so much more than Adobe.