Basic question - how to remove a blemish on someone's neck?

We shot a two-camera interview last week. At the time, nobody noticed the interviewee had a small scrap of paper stuck to his neck (from shaving perhaps) but he’s now spotted it, and requested that we either remove it or ditch the video. The problem is that his neck is moving around a fair bit, and that the paper also sometimes disappears partially behind his collar - here’s a screenshot of the close-up: 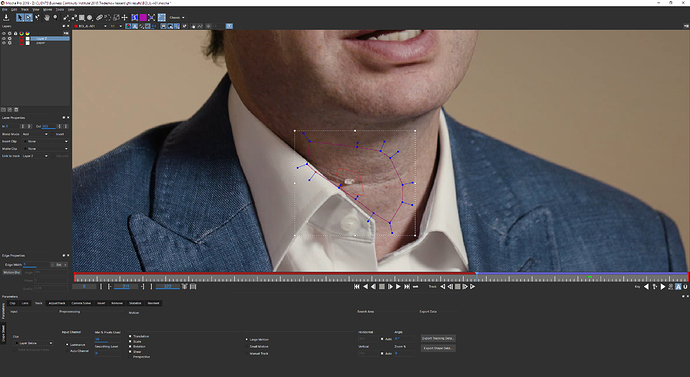 I have two questions. The first is that as the neck isn’t a planar surface, it’s proving hard to get a decent track of the background area: this doesn’t seem to matter so much in the wide shot as the blemish is smaller in frame. Several times I’ve got a “tracking terminated prematurely” error from Mocha suggesting I increase the minimum % of pixels used, even at 95%. How big should the background track be?

Second question is that the edit (2’50") is formed from about 30 minutes of interview. There are 32 separate cuts in it where we’ve either cut from one camera to the other, or cut out some footage. Will it be less problematic to just treat each one as a separate shot (tracking, creating a cleanplate etc), or create one huge master track for camera A and one for camera B, render out complete takes for both cams and then swap the fixed footage in?

Cheers Martin! I’ve been trying to apply the principles in your “Get out of my shot” tutorial to this - the paper is more or less planar with his neck and doesn’t flap around so tracking the two together sounds like a good idea. FWIW here’s what it looks like…

One final one - I did a pass which wasn’t great, as there’s a blemish to the right of the paper which is only partly covered by the cleanplate. How do I “un-render”, or view the original input clip without its rendered output, so I can create a new cleanplate? (Apologies this is such a basic question!)

I’m still getting this colour bleeding when the “paper” layer is occluded by the collar: 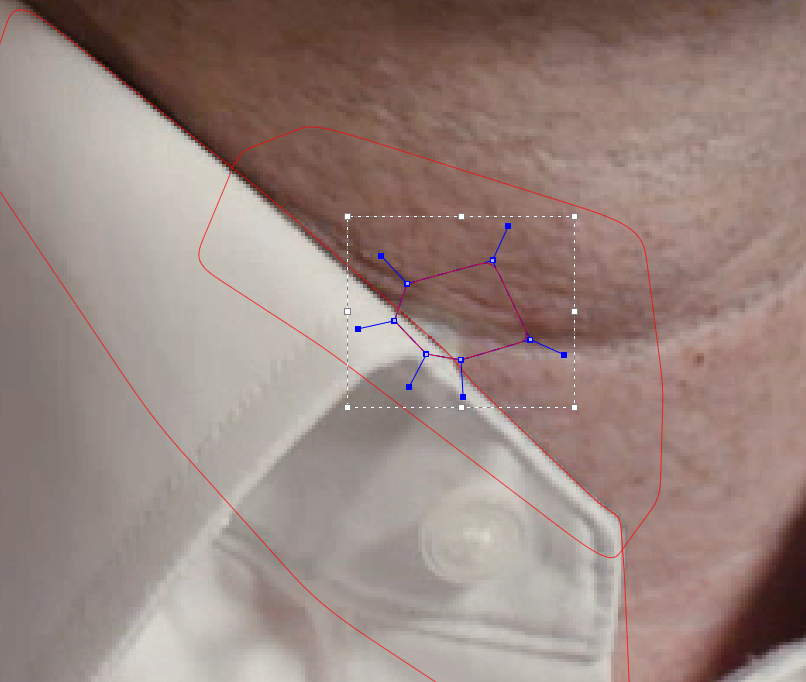 Are you using illumination modelling, or is it set to “None”

Try setting your interior blend to a reasonably high number, like 10-20 to see if it helps blend out the artifacts.

I am going to pop in here real quick and say the Remove is overkill for this shot. The best solution here is actually to make a roto shape around the paper, subtract the shape, and just duplicate the layer on top of itself and shift the neck pixels underneath to patch the hole. No need to worry about the complex skin track if you do that. And if your shape gets into the collar area, simply make a collar roto shape and composite the collar on top. This will render lightning fast and won’t need to have lighting adjustments.

Your layers might look like this in your host:
Collar on top.
Subtract paper roto shape on this layer.
Move this layer over with no roto shapes on it to fill the hole above.

Martin is 100% telling you the right way to do a remove, but this is easier as a patch.

Thanks so much both, we’ll give it a try!