I want to use broadcast safe to export to German TV and when I’m in my ProResHQ timeline, adding the filter, adjusting everything, it looks perfect - nothing goes over or below 0 or 100 and as soon as I export OR render it, the values are as without the filter - even if it is defenitly switched on… any idea ???

Hi Sebastian. We have not been able to replicate the issue that you’re seeing on our systems - if you can provide more info that would great assist us in understanding the problem. It looks like you’re using Premiere Pro but we need more info than that.

We would like the following info : host and version, OS and version, continuum version, and a preset saved from the BCC Broadcast Safe filter. And ideally, if you have a project with media that you can send then we’re more likely to be in a position to see the same thing that you’re seeing. 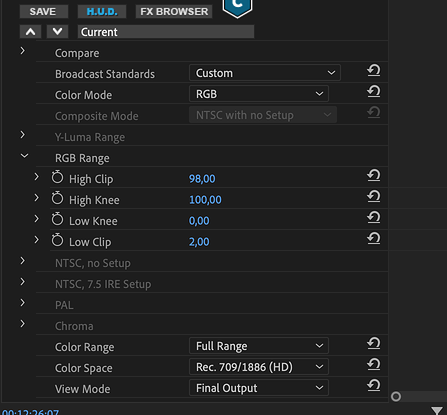 Really now idea, what I do wrong…

I already tried MAXIMUM RENDER QUALITY, or MAXIMUM BIT DEPTH or COMPOSITE in LINEAR COLOR, don’t do any changes…

Here’s a link to how I did it with a screen recording:
https://sebastianharnack.quickconnect.to/d/s/qc2OsJD3a8y9G0Y14DEk6ukWNaRXg13h/9RvE0yBSVZERUuGQtvlsgObgYyIGCzc6-aLogtZdd4gk

Thanks for your help.
Beste Sebastian

Thanks Sebastian - this will definitely help us. I’ll pass this along to our QA techs and ask them to try and repro.

So our QA ran some tests and can repro what you’re seeing in the Lumetri scopes but when they use the info panel to read actual pixel values the render result appears to match the result that you’re getting in the UI. And they’re also seeing the same unexpected result when using the Premiere Pro native Broadcast Colors filter. So is it a bug with the Lumetri scopes? Possibly, but we would need to do more testing to be sure of this. One thing to test would be to use the BCC Videoscopes filter to measure the render vs the result in the timeline - curious as to your findings with that.

Another question for you Sebastien - are you applying the BCC Broadcast Safe filter directly to the source shot in the timeline or on an adjustment layer above the actual source? I have tried it both ways on my M1 Mac with the latest Premiere Pro and Continuum and I’m unable to repro the failure - the live result is identical to the rendered result in the timeline - so just curious as to where he filter is being applied on your timeline.

That really could be…
Are those BCC Videoscopes only watermarked if not bought but else working the same?
Because with those I can’t see a difference between rendered and not…
BUT the red dot appears sometimes even with the filter rendered in.

Are you able to check my files?
https://sebastianharnack.quickconnect.to/d/s/qc7jmFmXsDDYUqhytGrkao2c74CJeL1K/4r7SbmoRTd0_T6vdLRNbEatL52as2xMK-GLQg7Bpu4gk

Thank u so much for helping.
Sebastian

I made another test.
I applied the BROADCAST SAFE and set it to 98% and 2% so that while playbacking, everything was absolute safe.

I monitored this with the LumetriScopes AND with the BCC Videoscopes (which I don’t own so running in demo mode).

I’m so sorry to bother you with all this,…
Maybe you or your team have another idea, what this could be ?!?

Thank u so much
Best, Sebastian 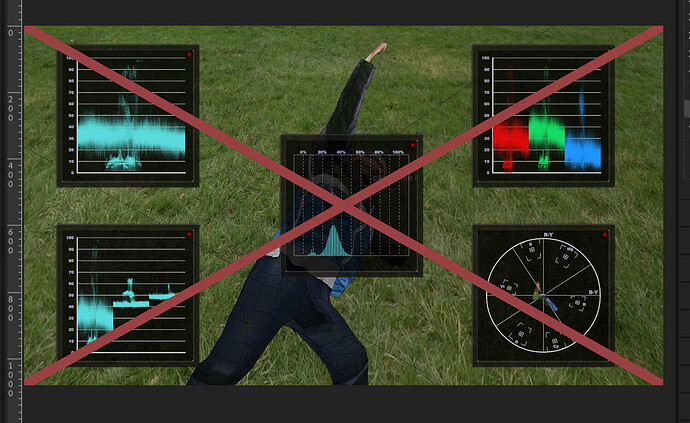 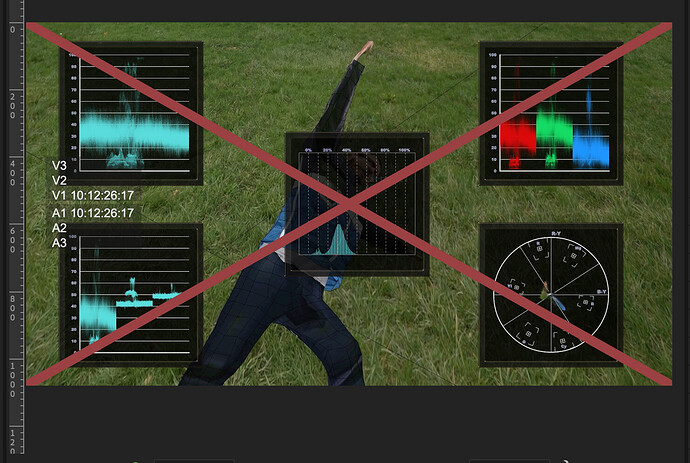 There must be something in your setup that is different from mine as I remain unable to reproduce the result that you’re seeing. Could be a host setting or perhaps the media codec. I’ve rendered in the timeline and exported to the desktop and the results remain the same - the levels are as I set them in the BCC Broadcast Safe filter.

I can take another look into this later today. In the meantime, I would like you to create a new project and replicate the issue, then collect the project, the media source file and the rendered result and zip that up. Send this to me and I’ll work with it on my systems to see if I can reproduce it locally.

Hi Peter,
Would u be able to send me that test project? Then I can compare the settings ?!?

Thank u so much for your help
Best Sebastian

I just wanted to tell you, that the German TV Broadcaster accepted my Master-File without any complains.
So even if Lumetri from Premiere does really strange things, it seems to work well.

Thank you very much for your anticipation and help.
Best regard from Hamburg
Sebastian