However… exporting eats up system memory at a rate of 1Gb/s, leading to out-of-memory crashes on my 64Gb system (at a 180-200 Gb memory limit that includes a huge swap part) when exporting a 1 minute film. I had to breakup the export into 30 sec sections (the YT film had to be cut into 2 sections). I tried different exporting formats, base file sizes, direct Compressor exports etc. The same happens with other footage (e.g. 4k Gopro Hero7), and using the ‘normal’ Motion Blur effect.

Is there any way to stop BCC Motion Blur from filling up the system memory during export until the system crashes?

Can you provide system details to help us try to reproduce this in our QA lab:
-OS version
-FCP X version
-System specs

Files are on external Lacie 6Big via Thunderbolt 3 connection. 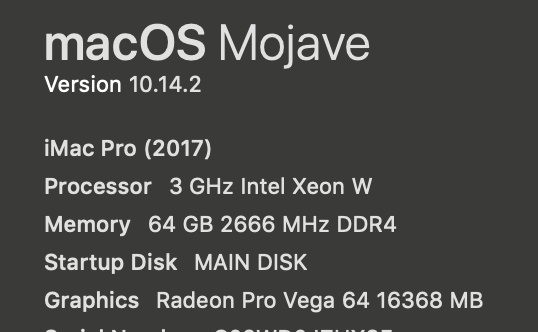 Thanks for the additional details. We have reproduced this in our QA lab and we’ll dig into this more deeply.

The memory management in FCPX should be improved now in Continuum 2019.5 which was just released.