I bought Boris FX Primatte Studio 2021.5 with Vegas Pro 20, I went to the website, used my 16-digit license key, confirmed my email, downloaded the installer, but when I try to register it, it gives me the following error: 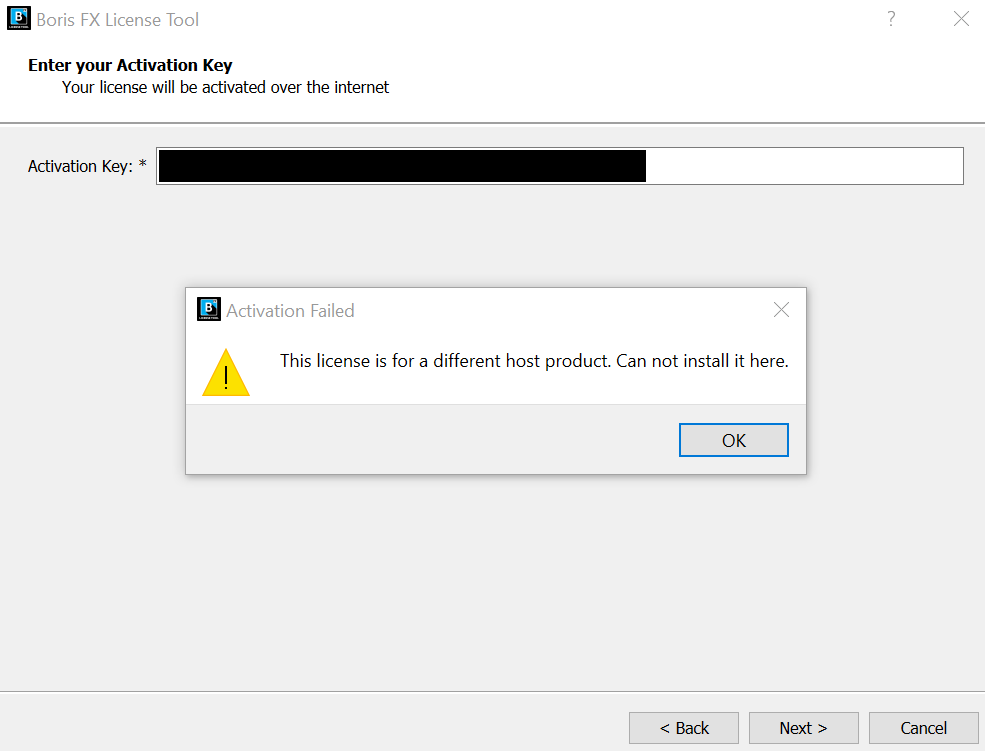 Screenshot 2022-08-23 210509985×751 13.1 KB
I understand that the purchase only included Primatte Studio and no other plugins that were installed as unlicensed, but I opened Vegas Pro and even that one came as unlicensed, and I am trying to figure out how to license it and uninstall all unlicensed ones.
Gid.Joiner August 24, 2022, 4:12am #2

Hi, Host in that msg is ref to your editing software, yours is Vegas, that needs the OFX download, did you download the version for Adobe?
Have a look at this link the Vegas forum https://www.vegascreativesoftware.info/us/forum/vegas19-primatte-never-received-email-with-download-installer-links-fo–132557/

This is the same one I got in an email! And this is the one that gave me the above message when I downloaded it. And the code I received was already “Registered” so I can’t use it again. Where is the download for Adobe then if that is the one I need?

You don’t want Adobe, i was just asking did you download the wrong one, did you put in the correct activation key, maybe you put in the key for Vegas by mistake?

The one I downloaded is the one I posted adove. That was the one that came to be by email after I entered my code on the site where the video led me to. It is for Vegas Pro 20.

My issue could be that I used up the activation key getting the installer, but that can’t be and if that’s true then I need a new key right? I already reported this problem to Magix and am waiting for a response, but can anyone else help? I understand I’m only supposed to get the Primatte Studio plugin versus all the other ones included with Continuum.

Can anyone help me? I tried to call them, but apparently the number 305-642-6400 which is the Magix Tech Support line, is disconnected? Also I emailed them days ago and they still haven’t responded!

Never mind, I’m good! Turns out the version I got was actually 2022.5! I downloaded that one and the code worked!