Can a rendered 360 video be tracked?

I’ve been trying to perform a track with a video that I shot with my GoPro Max, after I’ve already rendered it with GoPro’s software, and I can’t get it to work. It just dawned on me that perhaps the stretching and stitching that is performed on the rendered 360 video affects the ability to track it?

I’m trying to add some 3D text to the runway in the distance - where the mocha label is in this screenshot. Regardless of what I track, how many shapes I use, what options I select, the surface begins to slip a couple of frames into the track.

Although I’m not an expert, I have successfully performed this operation on other videos with little difficulty. I feel like this one should be simple, lots of textures and contrast variation - tons of options for co-planar surfaces. But even a manual track behaves erratically.

So before I start asking specific questions of my methodology, does anyone know of a reason that a post-rendered 360 video might have difficulties tracking? 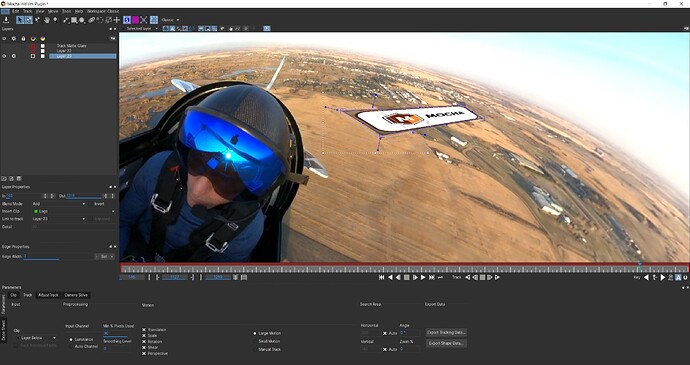 If by post-rendered you mean you’re rendering one view of a 360 video so it’s a 2D image, then tracking with planar is going to present some problems, mainly because of the camera distortion. From what I’m looking at in the screenshot you’ve still go significant barrel distortion in the plate.

There are two approaches here that would require Mocha Pro:

If you just want to use HitFilm and Mocha HitFilm however, you’d be able to get away with some planar tracking, but you’d be better off calibrating and undistorting the shot first, tracking the flattened view then redistorting it later on.

Dang. I suspected that was the case. At least I know I’m not crazy - it had me pulling hair out.

I’ve never done it, but I think I can use Hitfilm to work with 3D videos. Can the Mocha add-on not track inside a 3d video? It has to be Mocha Pro?

The bundled light version of Mocha HitFilm has track, roto and 3d solve.
The 360 support is only in Mocha Pro.