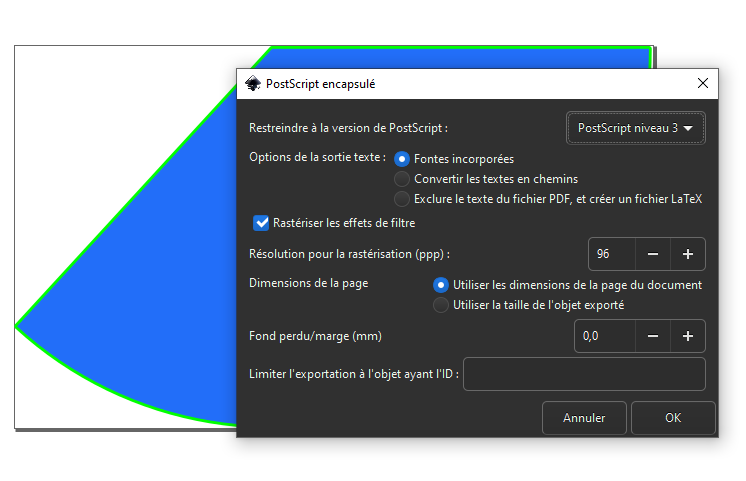 So i when import this on Title Studio it’s close.

I suggest to update import .svg with Title Studio

@PeterMcAuley Thank you so much
Perhaps Title Studio support .svg comming soon. Wait and See !
Have a nice Day,
Kind Regard

@PeterMcAuley Are there any plans to add other vector formats (like SVG) support to Title studio?

Currently, we do not have any plans on expanding on the vector graphics format that Title Studio can import. If enough users demanded support for svg then we would certainly look into adding that as an option. Our feeling is that most folks have access to Illustrator and therefore are able to export an svg file as Illustrator 8 (either .eps or .ai) which can be imported and modified in Title Studio.

Dear @PeterMcAuley,
thank You for your quick response.

Despite the most users at the moment have access to Adobe Illustrator, the more and more people choose to use its alternatives such as Inkscape or Affinity Designer

Is there any particular place, where users can suggest this particular feature or any other improvements?

This is indeed the correct channel for sharing ideas for new features and improvements to the product. You can also send these to me directly, via peterm@borisfx.com.

I understand that although some folks have access to Adobe’s products there are some that do not and that opening up the supported vector import formats in Title Studio would help those that are working in Inkscape or Affinity Designer.

With that, let’s open this thread up to everyone and see how many folks would like to see us expand SVG support in Title Studio. If there are enough votes to push it forward then we can move it up in our development list.

Please understand that I’m not saying that it would definitely happen as we do not know what it would take for us to make it so, but if there is enough support from end users to back up this project then it stands a greater chance of moving up the list.

Dear @PeterMcAuley
Thank you for your quick response and for being open to dialogue. Of course, I understand, that the new features and/or existing feature extension can be a complex and time-consuming process and that the company may have a long list of features with higher priories, but it is great to have a chance to express our needs.

Recently acquired Title Studio and the first thing I did was attempt to use EPS files to bring a trace of my logo into the plugin. Not having or be willing to purchase a host of Adobe products, I tried exactly what the original post tried and downloaded Inkscape, traced my logo and created EPS files for multiple separate layers. Only to discover that Title Studio crashed each time I attempted to open my newly created Inkscape “EPS” files. That was disappointing. Reading this thread, it sounds like I wouldn’t be able to open SVG versions of my logo, either.
To me the context of the original post seems overlooked. Since Inkscape is capable of creating an EPS file, why should Title Studio ever crash when a user attempts to open Inkscape EPS files? Is it the position of Boris FX that Inkscape does not produce valid EPS files?

If Inkscape does produce a valid EPS file, reading EPS files properly is not a feature that customers should need to lobby for prioritization. It’s a file format that the software claims to read, but doesn’t. Therefore, the original post would be a bug report, not a a feature request. A bug that I am still encountering months later. So please clarify, are Inkscape EPS files not really EPS files?!

SVG is not a huge deal for me, but today I got an SVG and I was looking to do a quick-turn 3d animation using Title Studio… was surprised to find it didn’t support SVG.

On the other hand, I’ve been hoping for .PNG extrusion without having to create EPS layers too but alas, to Illustrator I go!

Hi, just to jump on the band wagon, I can create EPS with my CAD software which doesn’t open in Boris software & as we’ve discussed before most of my OBJ files won’t load,
your statement ‘Our feeling is that most folks have access to Illustrator’ is wrong, Boris’s bias towards Adobe is very disappointing esp as more ‘other’ software is coming on the market & Adobe subscription deters new users to that product,

Ya, not into renting anyone software! you end up broke, for whatever reason, then you have no way to work to help yourself out of being broke. I am not sorry, but I’m not into that, so i prefer to buy the software instead.

I totally understand where you’re coming from and with that I’ll file a feature request to add support for handling SVG and OBJ files in Continuum - I can’t say exactly when the dev work will happen but at least the feature request will be officially logged in our database. If it’s a quick task then it would happen sooner rather than later.

I Thank you from all of us who want it now and for all those of us who dont know they want it yet!
until then, we wait for the future to hopefully see it happen.