Hi guys. I’m doing some tests for an upcoming 360 shoot. I’m having trouble removing the drone from a particular type of shot however. 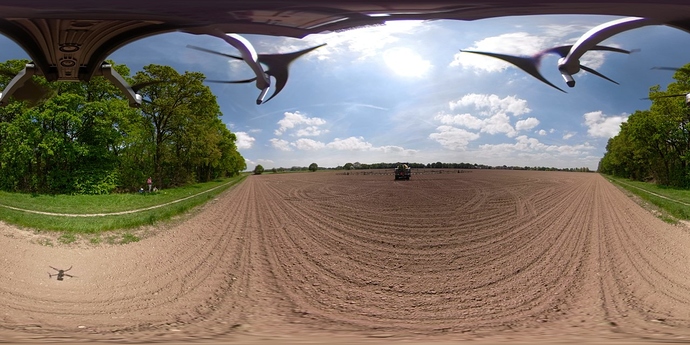 If you look at this screenshot you can see that the drone intersects with the treeline and the sky. I’m wondering what the workflow would be to successfully remove the drone in a situation like this? The drone flies away from the treeline eventually only intersecting the clear sky

I found it quite easy to remove the drones shadow with a regular remove workflow detailed in this tutorial: Boris FX | Mocha Tips: How to Remove a Moving Object Then it was simple enough to remove the drone pilot with a photoshopped cleanplate so am somewhat familiar with the remove module. But this more complex workflow has left me a bit confused!

Would be very grateful if someone could point me in the direction of a good tutorial that does advanced 360 drone removes or give me a step by step run down for this?

Unfortunately, for removing over trees the remove tool with either work perfectly (if they’re not moving organically and that’s extremely unlikely), or it will artifact but hopefully in a less noticeable way. Track the trees and the sky as different shapes and try to remove over them.

You will almost certainly have to do some hand correction with rotopaint to fix any artifacting in the trees, but you can use the lens paint workflow to make any corrections on the trees.

We do not have a tutorial in long form for a shot like this, but if you can share this footage I might be able to make one eventually.

As a tip for future productions (I had to learn that as well…) always try to reduce the footprint of the carrying device - be it drone, car, rover or even camera guy - as much as possible. The smaller the footprint is, the easier it can be removed…
In your case, try to mount the camera as far from the drone as possible. For example put it on a monopod/selfiestick and then mount it to the drone… Another way could be to record your cleanplate with a second camera on top of the drone…

We are having the best drone for Photography by which we can take the photography to next level.