Congratulations! (from a HC Fusion user)

I’ve been into CGI, matte paintings, set extension and other stuff like that for a while now (in Fusion on a daily basis BTW), and in one of the trickiest project I recently fixed, I used the powermesh intensively to solve an insert in a difficult scene…

I must say it saved my life, like a loooooot of time anyway !

So congratulations : even if the tool has been existing for months and months now, it was the first time I really relied on it and it was a success

Therefore I had to report this here too…

And BTW, cheers to Mary P who always inspired my way of using Mocha

Hello @Factorysam !
Thanks for sharing your positive experience! It’s great to hear that artists find a great use of the tools. Having Power Mesh in Mocha really expands the field of where planar tracking can be used creatively. Surely it will help you many more times in future projects.
Have nice comping

Yeah you’re very welcome… I didn’t take time to post here for months and probably years, but I had to mention it

Also, I noticed that you finally thought about Fusion users and posted some basic WF videos there and fro : great idea, better late than never.
I’m not the targeted audience but it’s nice and I think there are a lot of potential users there too…
Keep it this way guys

I second the vote for more attention towards Davinci & Fusion users. Thanks Factorysam

“Tight” NDA on this specific one (and it is kind of justified), but why not transcripting a bit to get around ?

So basically, a good looking lady wears a classy dress & jacket with a kind of stripe of buttons in the middle. On top of this hangs a jewel hooked to a necklace : this 2 latter broke the continuity with the scene before in the same museum and needs to be removed.
The whole scene lasts around 20 s. I think…

Of course, she moves around, walks, has different perspective POV, and the necklace shines inconsistently and “covers” the top of the buttons stripe… inconsistently too. And of course, her hands occlude the jewel several times

I used a combination of Fusion paint (stroke whose center parameter is animated by a tracker) and Mocha… When the easiest part (the jewel mainly) was done, I had to wipe out artifacts added by the paint, which I did with Fusion.
The mocha mission here : after a lot of work done yet, I had to roto* her hands to add’em back when showing up on the jewel. I could have done it with one of the 3 Fusion’s trackers but I used Mocha. This part was easy (*no real tight roto, the whole rough hand mask put again on top, impossible to detect it as my client confirmed).
BUT, when it was time to treat the top of the buttons stripe - because the necklace was still visible there - no tracker could track till the end of the sequence. She turned more than 45° right actually. However the only/best solution I found was an insert instead of a remove (Mary suggested that to me years ago ;)).
So I used a timestrecher node and a mask to isolate 2 buttons that I had to be put on top of the 2 (on the top of the dress) where we could see a bit of the necklace on.
The ONLY way to go through the whole clip was to use the powermesh, with a width more than twice larger than the stripe and a lot of tight points on the mesh (uniform). The tracking was rock solid, even when the lady was turned up to 45° !
I think it’s a bit long here, and I hope it’s not confusing (and that you can understand how a french guy figures out this stuff 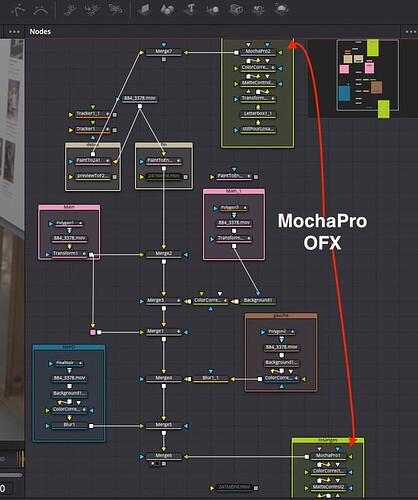 Mocha in Fusion is great, don’t let fusioneers to remote from you