In case you missed it, Optics 2022.5 now adds the ability to create & render Particle Illusion animations over a static Optics composition. Optics 2022.5 is a free update for users on an active subscription or U&S contract (purchased new or upgrade within 1 year).

It would be great… if it worked. If I open an image in Optics (standalone OR the filter in Photoshop) and apply a PI filter (smoke) then click Launch Particle Illusion, the emitter shows up in PI but not the photo. I’m copying all of the steps in the video. I’m even using a picture of a cup of coffee LOL.
I downloaded and installed the updates to Optics and PI emitters today, so my version is up to date.

Can you confirm that inside Particle Illusion that the preview over background icon is set to composite on the source frame and not to over black? [image]

I figured that out and it was the issue (would have been nice to be mentioned in the video…) but now when I look at it I have another problem. Any masks that I create in Optics are not transferring over to PI. As in the example in the video, I put a Steam (smoke) emitter over my coffee cup, and masked out the bottom of the emitter. However, when it’s open in PI, the steam/smoke shows on the coffee cup. How do I get the mask I created in Optics to transfer over to PI?

Sorry to say that masks do not get transferred to Particle Illusion.
If you want to use Optics-generated masks, you would need to export them back to Photoshop via the mask exchange workflow and composite them together with your masks.

Alternatively, you could recreate your masks with the native tools in your editor of choice. (Premiere, AE, etc).

I added a PI to an image, & added couple of emitters (I don’t have a cup of coffee) 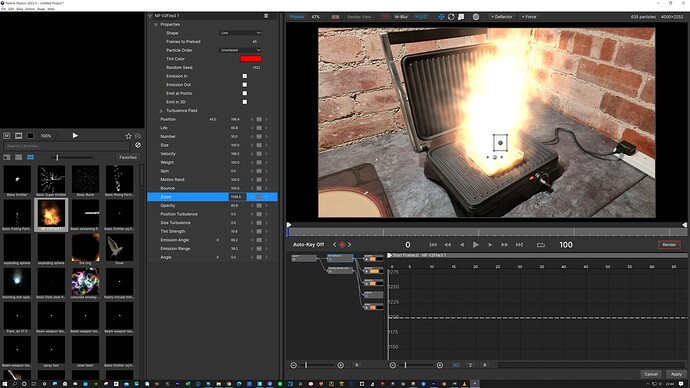 added a mask back in Optics, 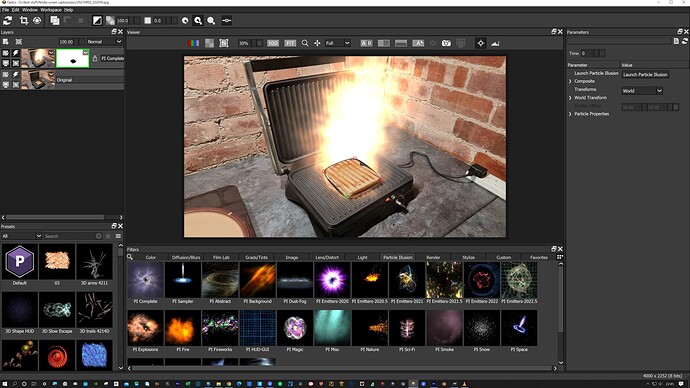 Added a new layer, I don’t know what the right term is but adding a new layer locks in the mask so you can move on & add . (you can go back & edit that previous layer ) 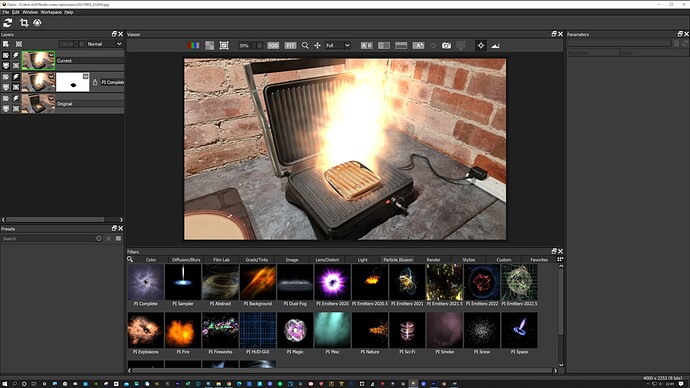 Then if I add PI to that new layer the mask is there, I’ve moved the default emitter to the bottom corner so you can see the mask, 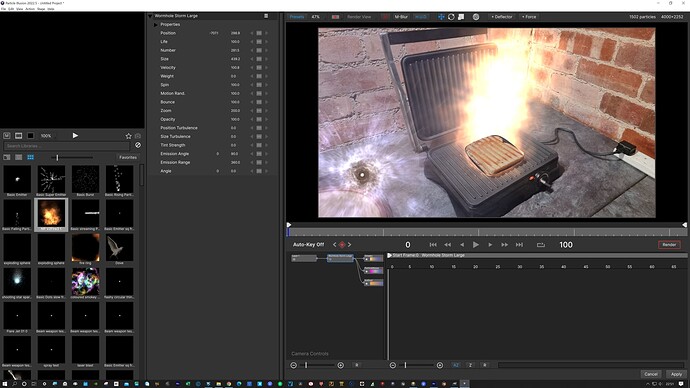 Yeah, I thought of just masking in my compositor, but then why even involve Optics? I’d just create the particle in PI then render it out and composite it.

That got the mask, but there’s no movement in the particles. So close, yet so far…

If you render out & composite in Photoshop it’ll be one still frame, you won’t be able to choose the PI frame,
What do you mean ‘no movement in the particles’, In PI?

If you’re talking about the particles you added in the previous layer then you’re not going to see them move, as i say you can go back & adjust that previous layer but you fixed that layer by adding a new layer, you’ve chosen the frame you wanted from PI & you’ve moved on,

I’m rendering it out from PI as a MOV so I can use it as a video. The steam from the coffee cup doesn’t move. It’s just a static shot of a girl drinking coffee, which kind of makes this whole “cinemagraph” thing pointless

Ah i get you, you were writing at the same time as me…
What you’re asking would be easy to do in a video editor but Optics isn’t that,
They added PI, which was a nice feature,
cinemagraph is new, the render out of PI is using the image from Optics, so for a mask to work, that mask would have to be applied in PI itself, it’s a linear thing,

Is the render dialog in PI set to the full duration of the PI timeline? Does the animation play in the PI interface?

Can you let us know what OS you are running?
Also when did you download & install Optics 2022.5? There was an issue with PI renders on older Macs that has been fixed.

Lastly, sorry that you feel disappointed with the new Optics feature. We do not advertise mask support for animation outputs, but can certainly log this as a feature request. There are many Optics users that do not use the PI standalone app who asked for this new feature.

Hi Ross. The ONLY reason (and what has been promoted like crazy by BFX) I use Optics is the EZ Mask to mask out my subject so I can use particles in static images.
Then the new video promoting cinemagraphs came out, so I thought “Cool. I’ll be able to mask out in Optics, then use those masks in PI and create a cool particle animation with a static image.”
But NOPE.
So if I can’t use the masks I create in Optics… why even bother with it? I can just as easily use masks in Photoshop then import the PSD into my compositor and use particles rendered from PI. Or I can create masks directly in my compositor and import particles I’ve rendered with PI.
So why bother with Optics at all?
And I’m not even going to talk about all the problems I’ve had with Title Studio…
Since masks (especially EZ masks) are such a huge selling point for using Optics, the fact that the dev team left them out blows my mind.
PS If masks in Optics don’t transfer over to PI, maybe the cinemagraph at the beginning of the video (the person jumping and masked over particles) shouldn’t be included because it makes it look like they do.

Oops. Forgot to answer your questions.
I’m running Windows 11 with the latest update
I installed Optics originally a while ago, but just updated to the latest version yesterday as soon as I watched the video about creating cinemagraphs. I also downloaded the latest particles update.

Hi Bruce,
The shots of the woman jumping were all created using Particle Illusion as the last step. No masks were used to composite the particles. You can use deflectors in PI to create some very interesting effects to simulate interaction. We purposely created a tutorial to show multiple examples that could be done using the shipping features.

The only shot that incorporates masks in composite was the man in front of fire and this used as an example of more advanced composite.

Optics 2022.5 is a free update and adding mask support to PI is not a simple development task. The team will consider the feature request for 2023 but no promises.

PS If masks in Optics don’t transfer over to PI, maybe the cinemagraph at the beginning of the video (the person jumping and masked over particles) shouldn’t be included because it makes it look like they do. 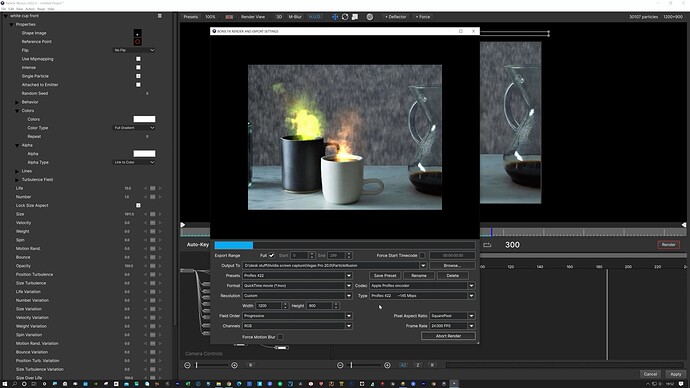