Hi - my Mocha Cache folder is becoming massive. If I delete its contents, will it also delete my REMOVE MODULE renders and make me have to rerender them?

Yes, but if you want to hold onto renders from the remove module I would not recommend using the cache folder. Render them to a deliberate shot folder if you want to stay organized. Which you can do by exporting the rendered clip once it is rendered.

Otherwise, just render to the timeline in AE with the Mocha Pro plugin and the remove module will re-render as AE renders. You do not really need to keep those cache files. And in general, the Plugin isn’t like the standalone, you don’t need to “render” the remove module like you do in the standalone. You render a frame or two to check in the plugin, and then render to the timeline in AE via the plugin interface.

Wow! I did not know that AE will do the rendering for the remove module. I always believed I first had to render it within the plug-in interface.

Yes - that is what I was thinking… are you rendering twice? Generally when using Mocha pro as a plugin, we do a few test render frames, than render removes, stabilize and inserts back in the host. 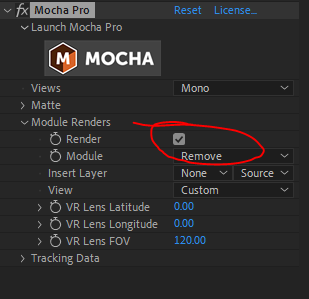 Aso note that in Mocha Pro under File> Clear Cache, you have the option to clear just specific projects’ cache, the global cache, or the rendered files. 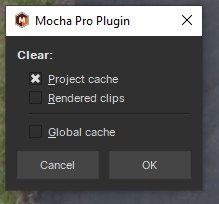