In the meantime, I have stored a large number of presets under the favourites (> 200), including many custom presets.
Due to the large number of favourites, using them has become somewhat tedious and time-consuming. Each time I have to scroll through the presets in the “Favourites” tab to find the presets I currently want to try out for a photo, because it is often a trial and not a specific selection.

It would be extremely helpful if there were a way to divide the presets into subgroups under Favourites.
Unfortunately, I have no idea how this could best be integrated into the existing interface.
At first I had the idea that you could create several tabs for favourites, i.e. not just one “Favourites” tab but any number of additional tabs. However, this increases the number of tabs, which does not necessarily contribute to clarity.
It would therefore be better if the favourites were subdivided again. However, this requires a new element in the GUI.
Another idea would be if the presets could be tagged (freely definable tags) and a selection of tags is available under “Filters” in the tabs in addition to the search. Of course, this could be extended to all presets.

Maybe I’m alone with this requirement, probably most people don’t use Optics that much and therefore don’t have many presets.

And on this occasion: many thanks for this great piece of software.

@martin.ische Thanks for your input. It will take some thought as to the best way to accomplish this. Currently, presets can be tagged when the preset is created or later using the Metadata window. 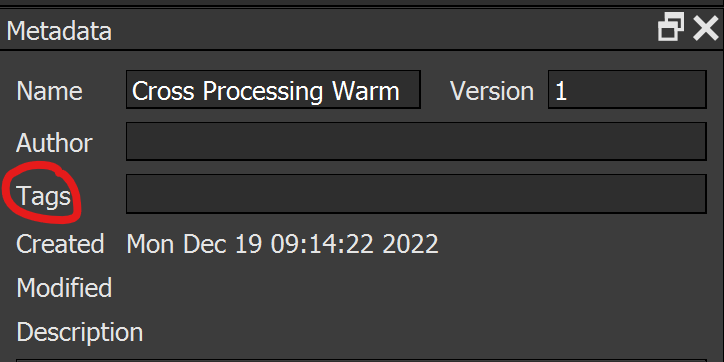 image724×362 9.7 KB
We would then need to put the infrastructure in for tag searching.

In the meantime, if your goal is to search presets from a particular filter, you can do the following:

Thank you for your quick reply.
I didn’t have this tagging in mind, although I have already used it for custom presst.
So the solution for my approach would not be so far away:
If one could assign individual tags for all presets, i.e. not only for custom presets, ideally of course several (comma-separated), and then place a select box next to the search in the “Filters” window - of course only for favorites, with which these filters can be applied.

I just noticed that the tabs “Favorites” and “Custom” are actually placed in the wrong window, i.e. their content is inconsistent with the other tabs:
While the other tabs never contain single presets, but a group of presets, these two tabs contain only single presets (or am I mistaken?).
It would actually be consistent if there were a tab “Own collection” (naming must be optimised), in which there would then be a “Preset group” with “Custom”, a “Preset group” with “Favorites” and also freely nameable “Preset groups” (in this case, tagging could even be dispensed with).
If you then click on “Favorites”, for example, alle favorite presets appear in the “Presets” window. These favorites could then be filtered by tags via the existing select box on the top, provided individual presets were possible for all filters.
If you want to call up a preset that is stored under Favorites again in the context of the original standard preset group, a menu item within the context menu of a preset could lead there.
In my view, this solution would be even more charming, but it might lead to protests from other users.

Thinking error of mine, the presets in the “Presets” window all have the same parameter group, then the incosistency would be in this window.
Crap, must think again