FX Editor not responding in Vegas 19

The new FX Editor is not responding in Vegas 19 and takes extremely long to load. In some cases I need to close the Video Event FX tab in Vegas for it to load successfully. The old FX Browser loads fine.

Anyone else with the same experience?

@misohoza Hi, I just tried, it did load, took a moment first time up to think about it, then i selected a grade & playback didn’t get any better in the editor than it shows in the vid I just put on YT, even after reducing the playback res to 1k.
The resolution of the clip used was only small 1280 x 720,
I suspect it’s more of a Vegas thing,
sorry i can’t help with the tech knowledge, all i can do is show you how it works on mine, but mine is quite a decent PC, I think if you click on my name it shows my PC specs, I don’t know what specs of your PC are but I honestly would expect this to play fluently & it doesn’t, I show the Taskmanager to show how much it’s using of my PC, Vegas rarely uses much of my PC’s potential & struggles to do the simplest of tasks so like i say, i think it’s more of a Vegas prob.
Did you ask on the Vegas Forum

Anyone else with the same experience?

I went through all bcc+ filters and most of them work fine. The editor opens normally. I found these 4 give me trouble in Vegas 19:

All of them work fine in Vegas 18 though.

It might be my computer is a bit underpowered. I am using an i5 laptop with 8 GB of ram. I also noticed it works better when the laptop is plugged in. When running on battery the processor speed is lower, 2.5 GHz (vs 3.09 when plugged in).

@dexcon How did it play in the FX Editor pop-up window, did you watch my YT vid?
& @misohoza I tried all of those mentioned, the FX Editor opens but the payback within the pop-up was no better than in my video, back in Vegas they play fine, I tried all settings i could see & window size & pic preview within the window, no change, the setting at the defaults & 1k was the best i could get.
My old PC, i7-7700 64GB Ram & GTX 1660 Super GPU struggled with a fair few things in Vegas.
But like i said before i would expect this machine to run very smoothly so it’d be interesting to know why it doesn’t.

I tried them in Silhouette Standalone, they all play perfectly in the Editor, but i guess that’s to be expected
the output is a bit messed up 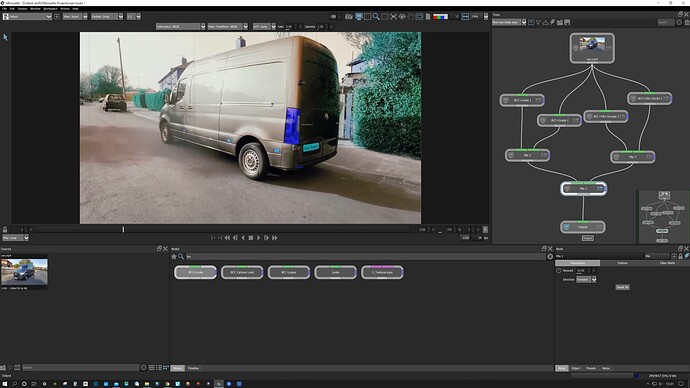 Same again the final image is messed up 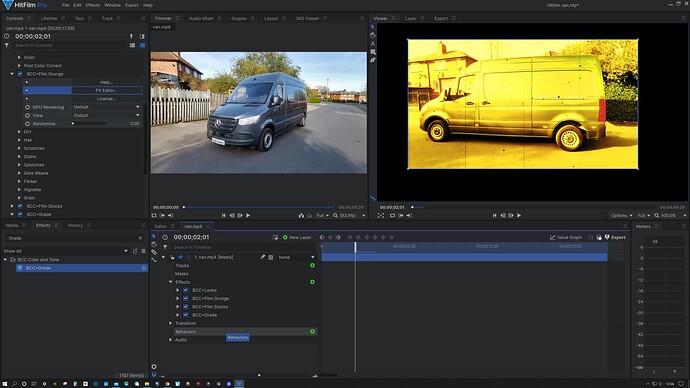 How did it play in the FX Editor pop-up window, did you watch my YT vid?

I’ve now tested all four mentioned BCC+ FX in Vegas Pro 19 as well as a few other random BCC+ FX. All played slowly in the FX Editor window - at what looked like about 6 fps (+/-). It staggered much like in your YT video.

Playback on Vegas Pro 19’s timeline was fine - 25 fps with one little dip to about 24.3 fps when the camera panned.

Sounds like mine,
a lot of programs play through once caching the files, then play better next time around but not in editor , i left it running, playing around & around while i went for food but it got no better

You guys are a few steps ahead of me. I’m trying to get the FX Editor to open.

But regarding the preview my experience is similar to yours. Slow in fx editor and relatively ok in Vegas.

When i open the FX Editor on an effect i haven’t used yet or for a long time, (I’ll have cleaned my PC since then), it is having a hard think when i click open, the editor screen comes up & the blue circle is going, it takes a moment for the preview thumbnails to load, even when it’s playing, slowly, the little blue circle is around the mouse curser showing it’s having a think with each frame played.

I have an issue even opening fx editor in Vegas 19. Window comes on and pops off. FX browser works fine. iGPU 630. 48 gig ram. Boris support doesn’t have an answer. Anyone here?