Having a bit of trouble seeing my entire interface when I launch Particle Illusion within After Effects. Here’s my screenshot: 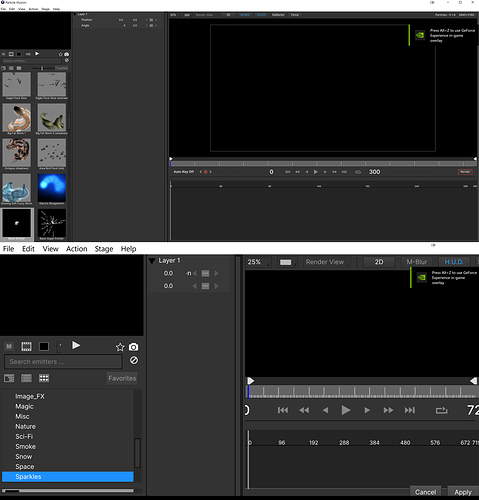 At the top is when I launch the standalone app. Fits my 4096x3840 screen perfectly. Below that is the interface when launched in After Effects. It’s all giant-sized and hard to see much. Would love any ideas.

Is this a multiple monitor setup? (It’s a strange one!)

So when running as plugin, the PI interface opens on the lower resolution screen?

You should be able to move it to the correct monitor and hopefully it will remember that when it opens in the future. Let me know if it doesn’t.

Sorry I don’t think I explained it well. The plugin version opens on the higher resolution monitor, but seemingly for an even higher resolution, with the fonts much larger than they appear in the stand alone pI, and the windows/buttons are not fitting on the screen. When I open the Preferences window for example, it’s so long that it doesn’t fit on the main monitor.

If it were a normal Windows program rather than a plugin, I’d go under Compatability and change the DPI settings, but as it’s a plugin I guess I don’t know if that’s possible. I tried changing the DPI with “Continuum Particle Illusion”, and it displayed properly when it opens, but not when I launch the plugin within After Effects. I’ve also noticed this when launching Mocha in After Effects just now, so maybe it’s actually an After Effects problem.

The thing to note is that it’s possible to have both the free Standalone PI and Plugin version installed at the same time. They have separate preference settings, and I suppose Windows is treating them as different apps.

So if you’re saying that the standalone version runs at one resolution and the plugin at a different, I’d suggest running the plugin PI as standalone – there’s a shortcut in the Continuum Start menu group for running PI directly (not launching from AE). I’m hoping it runs at the same resolution as when launched from AE…