The person assigned to your support ticket is the most qualified to answer your question.

Sorry about that Michael. If you don’t receive a response tomorrow, respond to this thread.

Well, I feel dumb. After a bit of back and forth today I remembered I have the “fix” already.

I should have remembered that the nvidia control panel will let me enforce that an app use whichever gpu I select.

I haven’t used that feature in some time, the one app I needed it for fixed their gpu selection some time ago, and I forgot it was there.

If you aren’t familiar with that feature, find a laptop with multiple GPUs where one is nvidia and the other isn’t. Most likely it’ll be intel. Open the nvidia control panel.

make the selection as shown on this dialog. 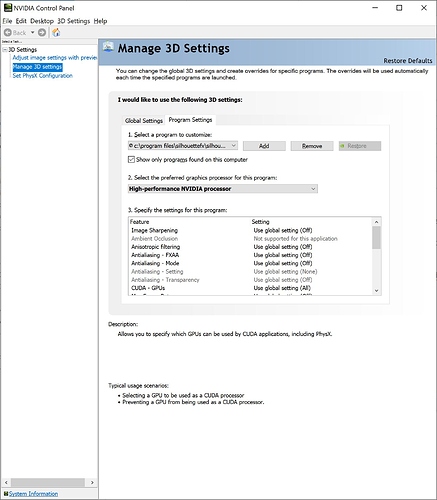 Using Geforce GPU will be more easier. Sometimes geforce experience error code 0x0003 wil be irritate you. But it is fixable.

@adrianahomes37 not sure what you mean. The 1050 is a Geforce GPU

Yeah you are right Sometimes GeForce experience error code 0x0003 will irritate you but now it becomes so simple to resolve this error.