I’ve got questions concerning the use of hardware in Silhouette :
I’m working on a Mac with relatively good specs, but Silhouette seems to not work as fast as it should, considering the fact that it doesn’t use a lot of the ressources at its disposal.

Here is the spec of the computer : 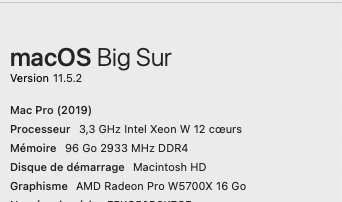 And here’s the activity monitor when playbacking in silhouette (it’s in french so if you’ve got any question don’t hesitate) :

As you can see, Silhouette is only using something like 6% of the CPU and 1,7% of the GPU.
FYI, Mocha Pro is working in a similar matter.

I’d love to have some input as why and what would be the best way to optimize.

The majority of nodes in Silhouette are GPU accelerated. However, nodes like Roto and Paint are largely CPU based. The faster the CPU/GPU, the better. There is not really anything you can do on your end. As far as Mocha is concerned, you should post a question in the Mocha forum, if you have no already done so.

Thx for the response Marco,
I get that in theory, but then I just don’t get why it’s not utilizing any of the GPU nor the CPU : as I said, 1,5 to 2% of GPU and merely 6% of the CPU at peak.
Am I missing something ?

I am using 2K 16 bit images and applied Film Stocks and Detail. When I play through the sequence, the CPU and GPU both jump significantly while the sequence is being cached into memory. Once cached, the usage will go way down.

What nodes are you using?

I was on a Ultra HD footage in 8bits.
I used 2 instances of Mocha pro, one with mesh warp the other in unwarp. Then a paint node follow by a highpass filter architecture, including a blur.
You say that “it jumps significantly” : that’s my whole problem I guess, it doesn’t jump significantly !
Thanks again Marco.

Sorry if I did’nt elaborate more on the original post : but the problem isn’t just that it’s not using any of the computing ressources at its disposal, it’s that it’s not doing that and that it is realy really really, I mean really slow.

The warp/unwarp in Mocha Pro is not particularly fast and although somewhat GPU accelerated, can be slow depending on the quality level you choose. If you don’t need the warp quality set to high, change it to normal or draft, provided that the quality looks good.

If you stack up the Film Stocks, Detail, Rack Focus on your clip, you will see your CPU/GPU jump when you hit play. Again, for Roto and Paint, they don’t require a lot of CPU or GPU resources. It is mostly file input/output overhead.