Hi
what is the best way to using BorisFX plugins to deal with some explosion footage. a house exploded about 850m away do to a gas leak and we caught the blast on Security footage. any help on what can i do to improve it?

i will do some playing with them all! 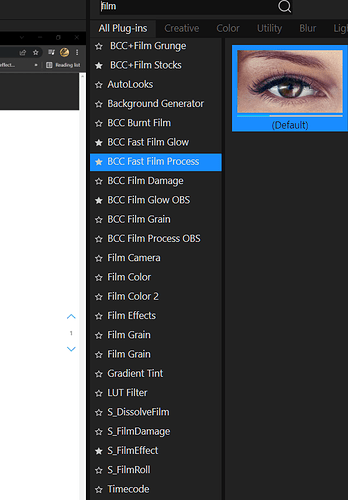 HI
strangely enough, i got free 2 month tail of all BorisFX software from buying a Wacom Tablet , so at this moment

i happen to have all of them to try, joy!

Sigh, but so much more learning to do thou in 2 months to get to know it, lol so me spending more time my computer, good thing it winter in BC, it s great time to stay indoors!

Thanks you for the suggestions

i was going to upload the footage for anyone to play with, if they care to.
since the clip in only 14mb it should be easy, but it would let me upload it, it says it too big, limit is 24mb, i zip it, so it should be smaller the its original 14mbthou.
But no can do! does the forum take zip files uploads?

Do you have BCC+ Film Glow?

yes but it is in the OBS “obsolete” dir thou

The BCC+ are the newer ones with the FX bowser added in, and the older ones, the " Bcc " ones just dont have the FX bowser (i think that what going on)

Peter would know, so is that Correct @PeterMcAuley ?

Sorry, about my typo … that’s BCC+ Glow (not BCC+ Film Glow as I had previously written in haste) and it should be found in the BCC Lights category. The other one that I mentioned, BCC Fast Film Glow (in the BCC Film Looks category) is a great filter too though and I think it’s capable of generating some really beautiful looks.

When working with the BCC Fast Film Glow, I find that I’ll typically modify the Intensity, Radius and Threshold params and then enable RGB Independent Glow option and maybe tweak the Glow Desaturation param.

When working with the BCC+ Glow filter be aware that there’s a matte generated by default that acts as a hold back for the filter result. You may need to tweak that for the result that you’re looking for - note that you can view the matte while working on it by setting the View from Output to Matte.

Thanks for the suggestions!
in the end, i used the default warm haze after cropping to zoom in.

Question: Security HiRes video, could that crop zoomed section of video , could it have been BCC UpRez-ed?