How to remove a logo from a moving trophy

I have for me a complicated removal of a logo, to be exact, the name on the bottom of the trophy needs to be blank. The lady moves the trophy that reveals her sweater in the background. I’ve tried content aware fill in AE and that didn’t work. I tried tracking a patch and that looks fake. Any ideas how to do this? 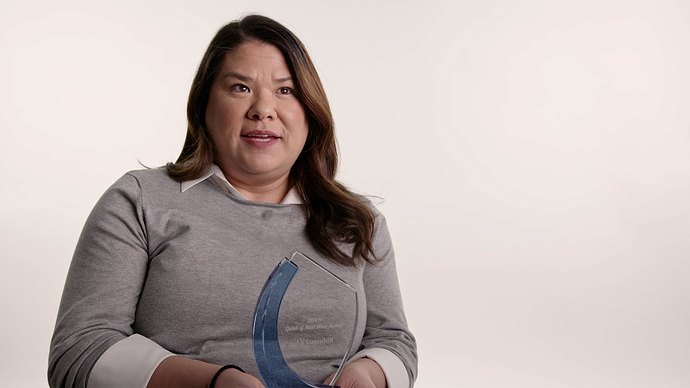 Woah! Nasty. Which of those lines is the LOGO? Ah, just made out the name “Ali”. Is that the Name Line? It’s just the foreground and background have such similar tonal ranges. I can feel a Clean Plate a-coming along. I’ve now gone from “nasty” to “interesting” and listening for what Mary and Martin come up with.

So, inside the trophy, there is a name on the bottom. They just want the name removed.

LOL. That’s a great reply. I know, this one is giving me a headache.

Sheeesh… there’s nothing straightforward and absolute about it at all, is there. You got: Transparent; movement; wrinkles in jumper and tonal similarities… it’s a nightmare.

Yeah, I mean, as long as it “passes” I’m fine with it. You should have seen this other one I had to do. Nightmare X10.

Y’know, I did something similar with a truck’s windshield. I’d filmed from inside and hadn’t noticed a squashed BUG on the glass. The trouble was as it was almost dead centre. I used a method of locking a Matte to the TAX Disc and used THAT to operate on the area of the bug splat. As long as I had some good footage it got replaced. But it was a headache, but not as much for the poor Bug!

Wow, that was a good solve.

I’m afraid that’s over my head. I am not that experienced in tracking.

Ok, I don’t normally respond this late but I just got back home from a users group meeting and this shot looks like an all night nightmare and I have much empathy for you.

You’re going to have to use the insert module and grid warp tool to patch the shirt first.

Roto the parts of the award and hands you want to keep. Garbage matte as much as possible and see what you can get away with by feathering.

You may have to roto in some shapes with a fill color and opacity on new layer to fill any holes text left.

Then you’re going to have to try a pass to key out any reflections on that glass and maybe blur/roto the reflections in parts where they cross text and use them as a blending mode like “screen” on top of your patch. You might be able to remove the saturation and use a luma correction like levels to just hard key the reflections instead of doing a lot of hand work.

This is a fiddly bit of work.

This tutorial is the closest thing we have to what you need to do. Boris FX | Mocha Pro: Patching & Removing Obscured Objects with Insert Module

I’ll check back in the morning. Good luck!

That is one stunning Tutorial. I learnt tons and tons from it. Thank you!

Thank you so much. I will give that a shot and see how it turns out.