How to use an image as an emitter?

Trapcode Particular can use a layer with image (or other element) as the base for an emitter. The emitter will then arrange the particles to represent that image using various options.

How do we achieve this in Particle Illusion? 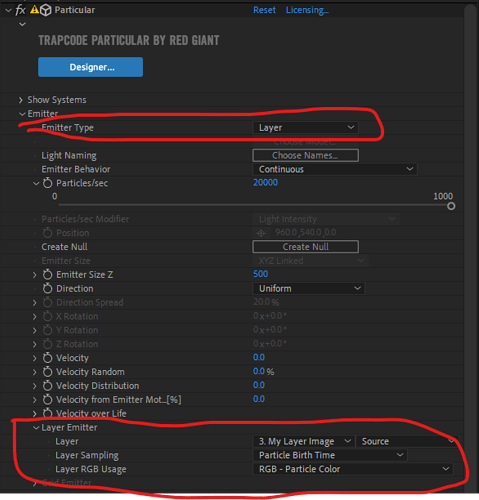 HI, is this Particle illusion standalone, the one that opens by itself without the need for a host video editor? if so i don’t think so because no background image can be applied for the emitter to reference off,

If it’s the Particle Illusion plugin version, a PNG with transparency can be added to the timeline,
in this case it’s just a simple white rectangle on a transparent background, 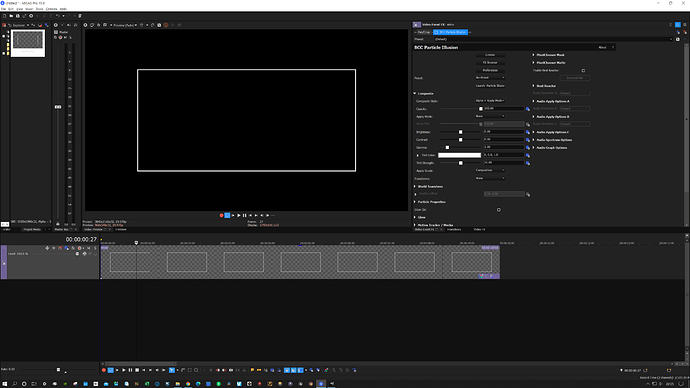 the emitter in Particle Illusion - Alpha set to Alpha from layer,
the particles with then only emit from the visible image parts, 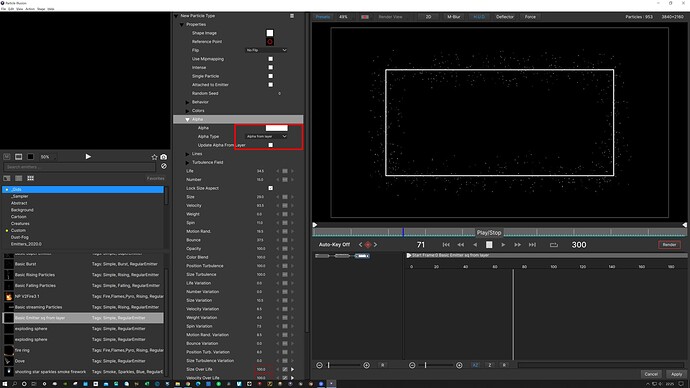 back in the host editor, Alpha + Apply Mode can be chosen which will hide the white rectangle from the timeline if desired 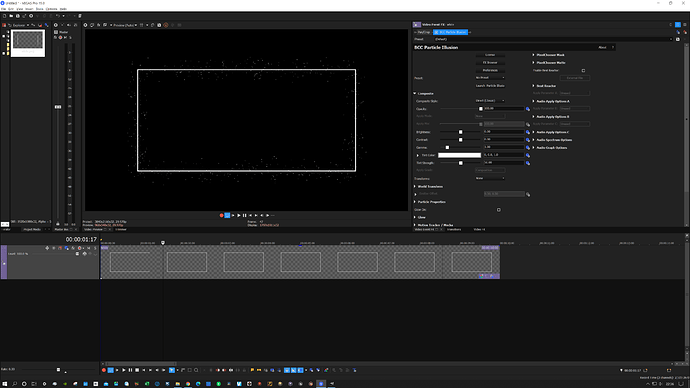 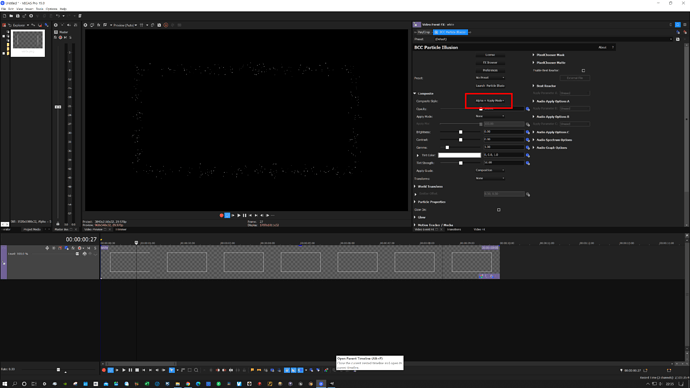 Thanks. I’m using the After Effects PlugIn. This helped me get close but I still can’t exactly match what I can easily do in Trapcode Particular - though in PI there seems to be more controls and sub-controls that provide some really interesting different effects (and also appears to perform more responsively). I am trying to have relatively static particles (just some subtle movement) that quickly bunch up to form the image. In Trapcode the image “resolution” is controlled by number of particles, their size, and also by turning off or way down all velocity controls. But in PI I’m finding I can’t get the particles to form the image unless I have a fair amount of velocity. However, that constant movement is not the effect I want. I am also getting confused by what size to make the emitter and or how to adjust the particle’s properties itself. i just can’t find a proper balance that produces the effect of simply forming an image from particles.

Hi, yep i can’t really explain but turning down the velocity will slow the particles down,
I’ve changed the image to coloured object on a transparent background 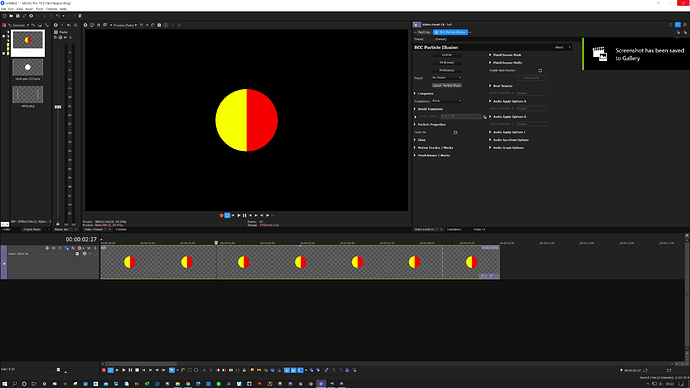 Try choosing a Basic emitter to start with,
Choose Area as the Shape 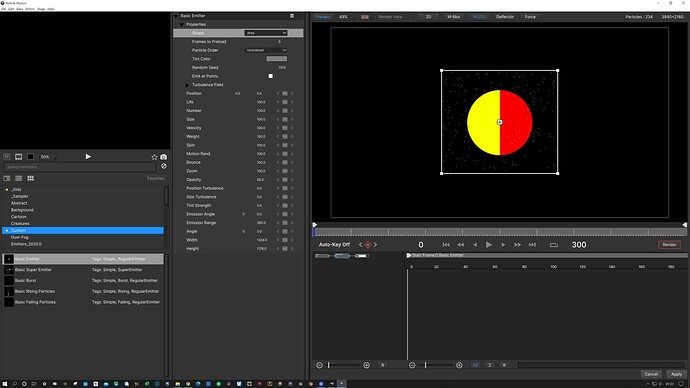 turn everything to 0 except Life, Number, Size & Velocity (the Life ones in red at the bottom you can set to Constant, but if you look they’re already at a constant level) 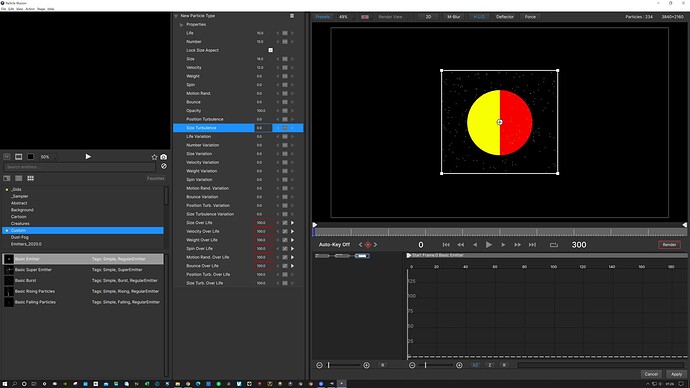 If it’s a coloured image you’re using,
set Colors to Color from layers,
& Alpha to Alpha from layer, 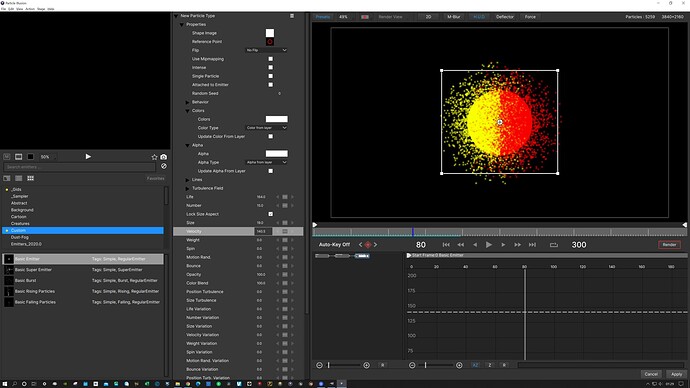 Also i found that setting the Shape to a solid square or round helps in these types of things as the particles cover the image better, so replicating a ‘particle image’ of the orig image/media that’s underneath, 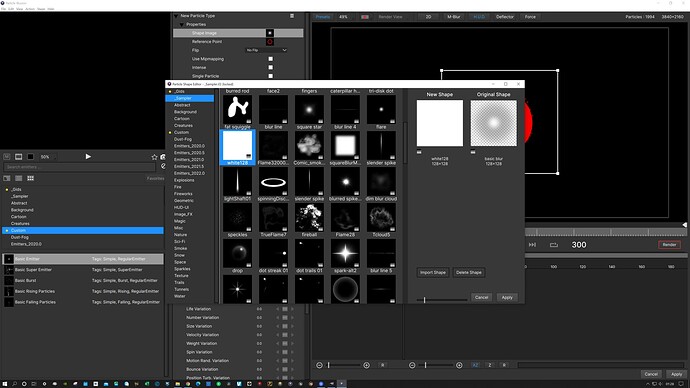 Then using Life, Number, Size & Velocity in the emitter node you can control the particles,
Ignore the ones in the second node for now (pic below), they’re mostly set at 100 but because you’ve set the controls in the far right emitter node on the end to 0 they’re doing nothing & have no influence., 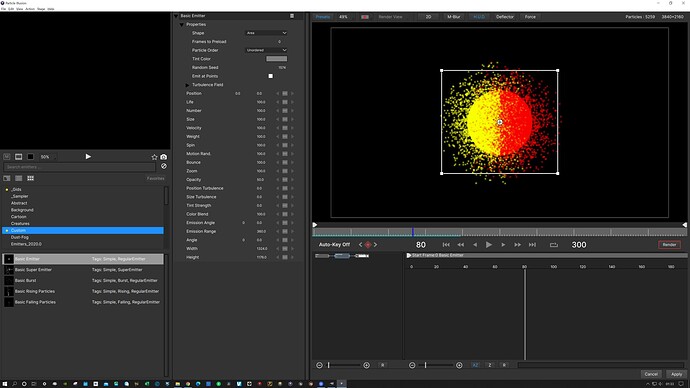 & all controls can be keyframed by clicking the sq in between 2 <> at the end of each controls,
for eg’ setting Number to 50 then halfway down the timeline create a keyframe, move a few frames forward & set Number to 0 will stop the emitter producing particles,

Also there’s an option to Emit at Points, at the top of the preview screen next to the % sign you can view over black, so see the result without the image/media showing 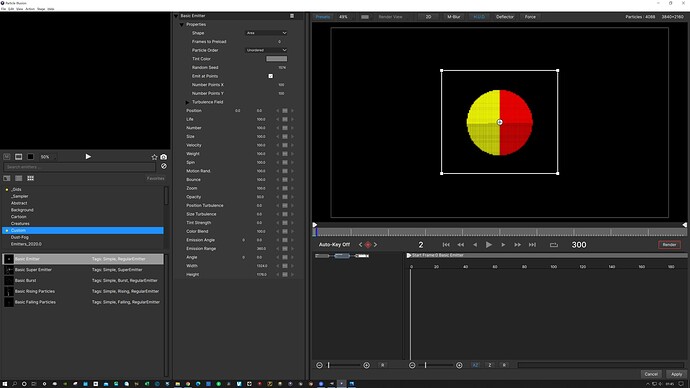 Turn Velocity to ) to stop the particles moving 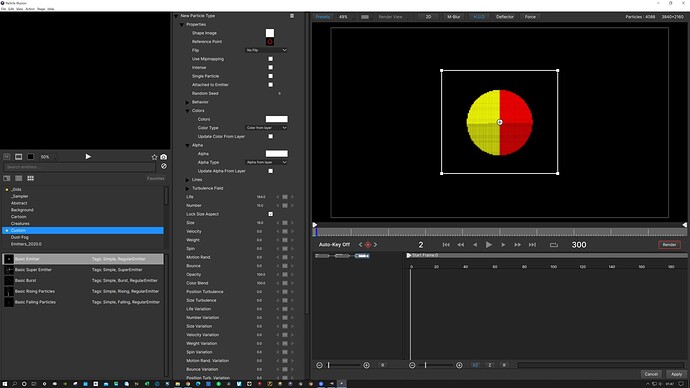 Gotta be honest when i look at some of the Presets i think How did they do that?

I know you mentioned Particular so if you know most of this forgive me but if you do like i say turn everything to 0 in the emitter controls except Life, Number, Size & Velocity then everything else seems to be a refinement & manipulation of those basic controls,
Life for how long the particles stay on screen,
Number for the amount of particles are produced,
Size is as it says,
& Velocity is how fast they move,

0 weight makes the particles spread out evenly across the screen, a + or - number makes them go up or down,

Each of these controls will have an affect on the other,
In this case when you’re trying to replicate the media image, many smaller particles help create a better image, just like pixels on a monitor screen but & the more particles you set will determine how well PI plays,

Thanks for your help Gid.Joiner! I’m starting to get the control I desire now.