Importing Matte Clip to start at Project In Point

Ive started a new freeway ‘remove all cars’ shot and im trying to import a matte clip (tiff sequence) in to start at frame 179 which is the project in point but I cant seem to get the matte clip to play from frame 179.

No matter the settings i enter at ‘Import matte clip’ window, (Frame offset set to 179) etc it always seems to import and then start from frame 1 in the project.(Ive been trying for around an hour, suspect Im missing something obvious)

Could you please advise the steps/settings to import the matte clip (I would like the whole matte clip image sequence ‘0-396’) so that it will start at frame 179 in the project.

To quickly illustrate, here is what happens at frame 179 at import: 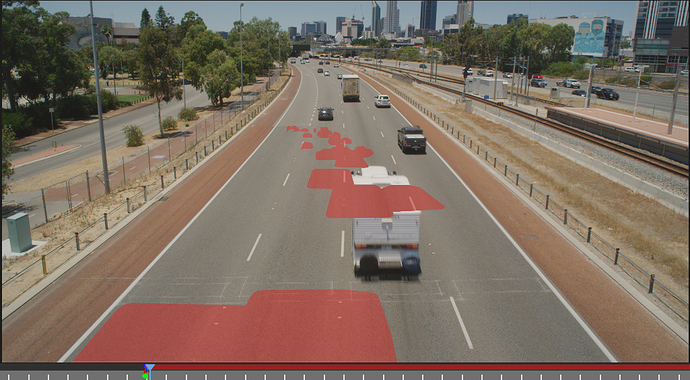 thank you and apologies for the beginner question! Im sure the solution is right in front of me

TThe only way around this would be to import the whole range of the clip and stick to the original project offset.

The project offset it not 179, that’s the project in point. Did you try it at offset 0?

However we should be allowing to import the specific range and have it correctly offset, which it doesn’t appear to be doing.

Hi Martin
thanks for your reply. I did have offset set to the default ‘0’ initially, which didn’t work and then from there I just assumed it was an ‘offset’ setting I had missed.
thanks for the workaround of just exporting rendered shapes for the full project length. Ive now tracked at least part of the cars backwards to the beginning frame of the full project, and am rendering out all project frames currently and Ill see how I go. I think this will all work from here. thank you!
Gareth

No problem. I’ve written up a defect about this as we should be respecting the imported range.

Thanks Martin, I managed to successfully bring in the matte clip with the ‘throwaway first 178 frames’ so that it starts from frame 0. And I’ve then reset the project in point and I’m off and racing, thanks for your help!
Gareth