This problem hits me in the head randomly, but regularly, sometimes after my CLIENT reviews my deliverables – very embarassing!

The error is a BFX message in my rendered output:

It seems if I preview a video frame with BFX on it before rendering, it probably will not occur – but we don’t always remember to do this, and only a handful of clips have these FX on them so we’d have to hunt them down. In this case, it was BCC Lens Flare 3D with Mocha tracking used to move the flare – but this comes up with every effect that’s motion tracked.

How can we reliably render without having to worry about this message appearing in our output?? Is it a BFX setting? Is this a bug? 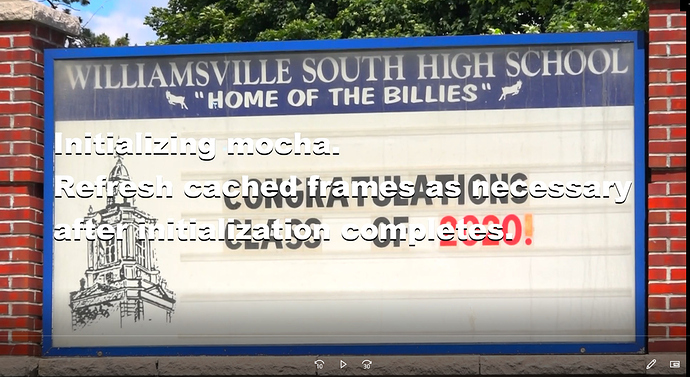 This happens because some hosts like Resolve don’t give us a way to initialize Mocha at the “right” time so it does a “pre” initialization and then later does a proper full initialization when the host gives us the opportunity. We are currently working on a revamp of some Mocha internals to avoid this situation (and other related issues), but it is a larger project and we don’t have a definite timeline in place yet.

In terms of workarounds, which host and OS are you running in? There are two things to consider in avoiding this message. 1) Once you launch the Mocha UI in the session or render a mocha frame where this message does not appear, it should never happen again for the remainder of that host session. So if you pop the Mocha UI open once, then render afterwards it should suffice and you don’t need to go through and hunt down every individual instance. 2) It’s possible that some hosts might cache the frame with that message already baked in, so before doing a render you should purge the host caches or pre-renders.

ah… should have mentioned (my apologies). VP17.

So it sounds like for every project, on render I need to remember to find the first instance where it’s used so Vegas can trigger the initialization, then do my render. OR in my workflow, put a bogus clip with a mocha track on it up front (e.g. on a “when you render enable this track” track), enable the track to force the init, then disable it (this way I don’t need to hunt for an instance).

I was hoping there was a better answer, like perhaps you could install a triggered event that Vegas calls before it renders that forces the init at render-time.

We’ll take another look at this in Vegas, but unfortunately I think those types of workarounds may be your only options for the short term.

I’ve seen the same thing in VP17 and fwiw, it does appear to be a cached frame that’s reset when the timeline shuttle is changed.

I’ve had it appear on startup but as soon as I either move the cursor or start previewing the project, the message goes away.

So, you might not need to do a render. Try just moving the cursor to the event in question and after a few seconds, if the mocha message appears, move it to another point in the event. You may find the message goes away and you can safely render.

Not sure if you’ll still have problems with multiple discontinuous events on your timeline that use mocha.