Issue with Fusion 16 and saving

There seems to be an issue with the Mocha Pro plugin in Fusion 16 that prevents Fusion from saving. If the plugin is in the comp it will cause an error when you try to save. If you increment the save version things will work again until inevitably the error will pop up again.

I will let @martinb know because this sounds like a bug. Thank you for letting us know.

Hi @bowserlm, which version is this and what is the exact error? Do you have the console output from Fusion or a screen grab we can see?

This is the very latest version Fusion Studio 16.2.1, though it happened the exact same on the version previous.

There is no console error, but this is the error that happens. 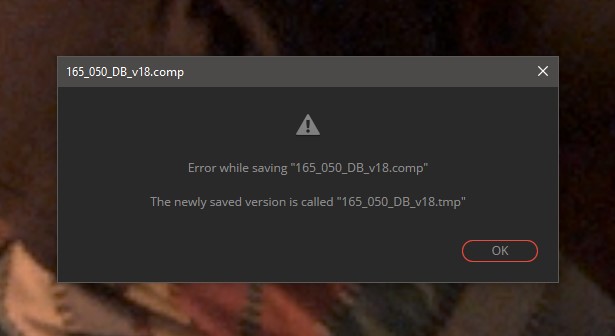 If I delete all Mocha nodes from the comp the file will save as normal. This error has been confirmed with other users with the Mocha Pro plugin in Fusion.

What version of Mocha Pro?
Saving in this way does not cause any problems as far as we can tell, so we need more information.

Can you show me your full node setup?

Here is a comp from another user posting online with the same issue.

I just opened that file and saved in fusion and it was fine, so i’m still trying to figure out the problem.

I’m on Windows. Mocha pro version, just updated to the latest so whatever version was the previous. Still happening with newest version btw.

And for that other user, not sure. Pretty sure he’s on Windows. Not sure of his Mocha version.

Thanks for the extra steps. I got it to throw the error this time.

@bowserlm Have you seen this problem in versions earlier that 16.2? You said you’ve seen it in 16.2.1 and “version previous”. Which exact version was this?

I’ve since narrowed this down. We’ll be investigating a fix asap. If you’d like access to the fix sooner, you’re welcome to join the beta.

Another user on our team said they’ve seen it since Fusion 16.1.1.

I’d love to join the beta!

Martin – we’ve got another artist on our team – Jacob@emberlight.se can we add him to the Beta program as well?

Sure, i’ll need the actual user name though.

This problem is now fixed in the current beta. We shouldn’t be too far off from releasing.