Jaggies on an Insert Shot

I have a very simple insert shot where a video gets put into a TV screen (camera on sticks), so it seems basic but there are these little jaggy lines around the edge that move (making them more noticeable, even though they’re very small). Enlarging the image doesn’t work. I can cheat them away with feathering but I’ve never come across this. (The track and insert are super straightforward, totally simple composite.) One layer with an imported video, that’s all it is.
Thanks! [Mocha Pro 2019.5 in After Effects] 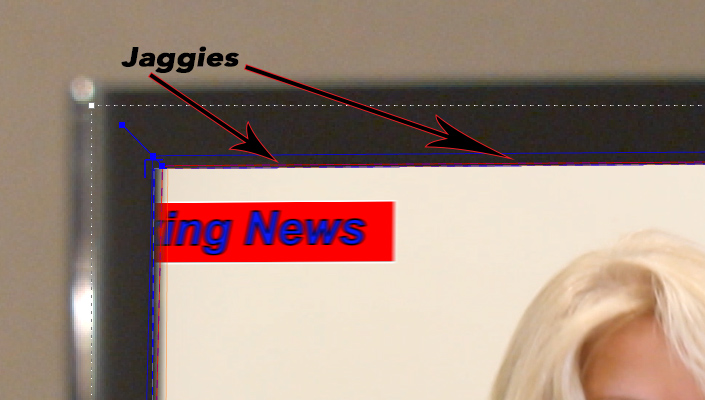 What is the movement of the track? Is there any major scaling or zoom happening in the shot?

There is no movement. It’s a straight on shot of a newscaster. It is converted from 29.97 fps to 24 fps second (but it was re-encoded into a new MOV file before being brought into MP). These jaggy lines do not appear when viewing the file itself, only when inserted into the track.

Are there adjustments to make to help an insert shot like this? Just not getting why Mocha would output such an inferior insert.

An insert into the live shot is just an opengl preview. What do you see when you render the shot? Are the jagged lines still there?

Yes, they are rendered in the final, high-quality output unless I put some feathering in, which seems weird, especially for Mocha “Pro” that is used for this kind of comp all the time. (Sorry for delay, somehow missed your reply of 4 days ago…oops!)

I now realize that when you asked what I see when I “render the shot” that you were referring to the render in MP, not rendering out the shot from the AE comp. And so…
Upon actually rendering from within MP, which I had not been doing, the jaggies do “largely” disappear. I’m not going to say it’s a perfect line because it’s not absolutely smooth, but it’s essentially gone and I think that was the issue.
I’ll just say here that I wish the Mocha Pro manual that explains all the various parts were more user friendly. The manual has an engineering style to it rather than a “when you do this” or “this function will” give you these results. Here are some examples. Here’s is where and why you would use this feature here and not some other feature. The manual is just too sparse for people new to MP, which I still am. But I’ve got the basics down after many hours of learning.

This is good feedback, thanks Rowan. To be honest, i’m just glad to hear someone still reads user guides!
Perhaps we need a “moving parts” overview user guide and a “How to” guide instead to help beginners with all the separate modules. I’ll make a note of it.

Are you able to send me the shot in question by any chance? If we can improve the distortion on the insert, i’d like to see how it’s set up.