Just a hobbyist with limited budget

Hello. I first purchased particle illusion back in the ‘Wondertouch’ days when user interface was pretty simple. I would load a background either image or video and do my thing. But that product no longer worked on my computers and with no support to turn to, I found Boris and first downloaded the demo which was good but didn’t allow me to load backgrounds.
I decided to purchase the ‘stand-alone’ product but it still didn’t allow me to upload backgrounds. I looked over the Boris site and really, I couldn’t tell whether I needed Mocha, Continuum, or some other flavor offered with most stating I could load backgrounds for precision effects. I opted for the Continuum (cheapest product to claim it could do what I wanted to do).
I eagerly loaded it onto my home lap top only to discover I needed some other platform to do what I wanted. Sooooo, I purchased the Vegas movie editor (pricey but not as expencive as Aftereffects which can be subscribed to but I only dabble now and again so in the end Vegas fit the bill in more4 ways than one) which assured me I could ‘plug-in’ to continuum and work my magic there. And to my surprise I can plug-in but still can not upload a background.
And to top it all off, my purchase of the ‘stand-alone’ products (Vegas and Boris Continuum Particle Illusion, and Particle Illusion) doesn’t allow me to put it onto my travel laptop without a completely new purchase…of everything.
I have tried to follow the tutorials but there are so many to choose from centered on each of the myriad of flavored products that i cannot find the one that says 'Used to Wondertouch? Here’s how you load a background for Continuum Particle Illusion."
So I’ve pretty much set-aside the whole thing except for just routine stuff that doesn’t require precision and, to be honest, am looking at finding an easier to use system that comes in just one version.

Hi, i just looked at Boris Particle illusion website page, it mentions ‘back in the host’ which to me implies the purchased version comes as a plugin as well as the standalone version,
So all you needed was a compatible video editor ‘host’ (Vegas) & you would have been able to use PI from within that host as you would like,
Continuum includes PI, so it sounds like you now own two PI;s, the purchased PI & the one that comes included with Continuum & both will work within Vegas.
If I’m right i would consider getting in touch with Boris & see if you can get a refund of one or the other?

To add a background, first apply your image to the timeline in Vegas, then apply PI directly on top of that image as an effect, you can then open PI, use the option at the top of the preview window to ‘Composite over source video’, add the emitters you want, click apply & you’ll see the effect back in Vegas 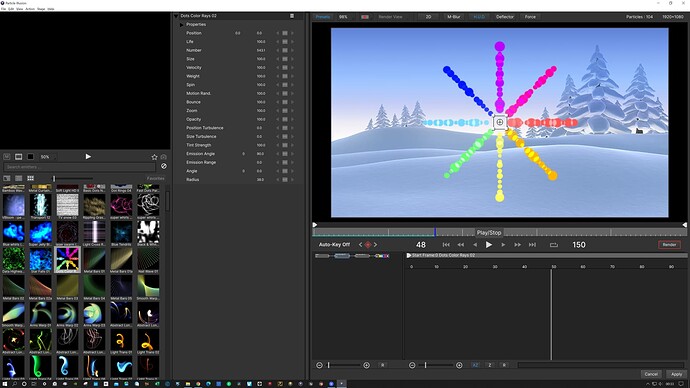 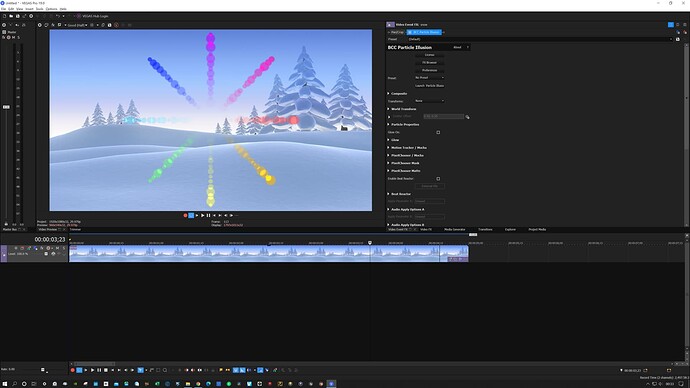