Hey y’all. So I’m working on a shot that shouldn’t be TOO tricky.

It’s a screen track that has some heavy obscuring going on. No worries… there are a couple of objects that I can track (including the edge of the TV and a statue on top of it) that should work.

However I’m running into a problem that I’m not sure why is happening. If I use the layer ordering to cut out some objects from interfering with my track… it doesn’t work as intended (and I’ve used it enough to think I know how it works).

Now, I’m not talking about once it obscures enough of the screen or statue track Mocha eventually gets confused. I’m talking just getting the tracks near each other causes it to freak out.

I’m kind of at a loss here. The layer ordering/tracking cull isn’t working. No idea what to try. Below you’ll see the image. That distance between the arm masks and the statue masks there? That’s where it screws up. 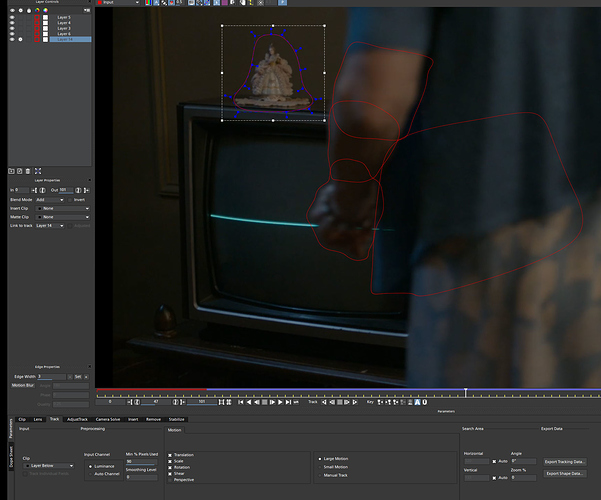 Not sure if this will provide any clue, but I was running into a similar situation (I’m using Plus V4). Tried a new spline to track and it defaults to the bottom of the stack. OK, that’s fine; it should be considered the layer farthest from camera. There were a number layers above that were off & locked with my “blocking” layers visible at the very top; i.e. several “unused” layers in between. Not only wouldn’t it track but something else was influencing right from the get go. If I started again with a new spline but moved it to the Top of the stack to begin with, then it tracked fine. I moved it immediately below the “blocking” layers when they would start to having any effect, and tracking worked as expected.

I couldn’t find anything in the docs nor come across this in any videos, but it seems that mocha is behaving as if there can’t be any superfluous layers, on or off visibility wise, between the layer getting tracked & any hold out layers.

But that doesn’t seem to be your case so even more confusing.

Thanks for the response! Tried some of that, but no-go. I still have Mocha Pro 4.X installed (standalone). Went and tried it in that and everything worked as intended. I’ll go back and try to bug-check after my deadline has passed.

That DOES sound very strange! I’m not seeing anything immediately in the screen shot you posted.

Are you tracking with GPU support on or off? Which version are you using?

Are you able to upload a video of this weirdness occurring, or send us a project file? (you can send to martinb [at] imagineersystems.com)

Hey Martin! I can’t send a file, but let me see if I can do a cell phone video and send it.

I am using GPU tracking.