Lensflare hotspot pivot point, any advise as to it's position?

Hi, If i track a light or the sun etc. put a lens flare hotspot on that light (Hotspot uses Mocha)
where would the pivot point be in reality?
in my mind the pivot would be the lens of the camera that is refracting the light on to the image sensor at the back, but is there any fundamental guides as to where to put the pivot when adding a lensflare post filming/production,
Here i’ve tracked a mans head & put the hotspot on

the camera is fairly stationary but as he walks on to the left , where to put the pivot,

I guess this applies to any lensflare tracked or not,
Or is it just in the aesthetics 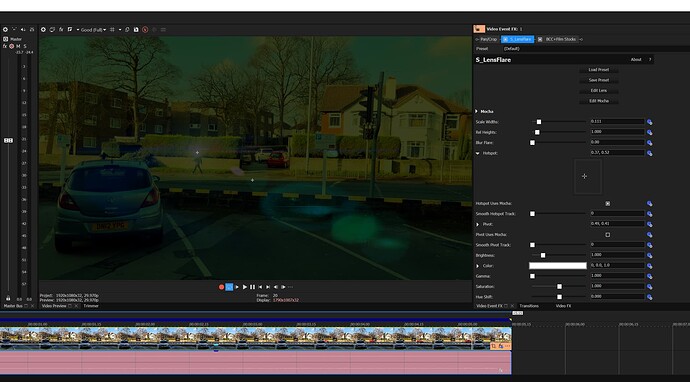 I think for most shots, the pivot point should stay at its default (in the center of the frame). You can move it for artistic reasons, and there may be some special cases where you might want to move the pivot, but AFAIK the center is the right place for it.

(If somebody thinks I’m wrong I’d love to learn more!)

Thanks,
yep the cheaper Lens flares that don’t have a moveable pivot point are fixed in the centre,
when a light/camera is moving & the flare moves across the screen it seems like the pivot point is mid way between camera & light, the distance the flare moves = the distance he light moves, when in really the pivot should be really close to the camera - lens to image sensor, ‘flange focal distance’ , the flare should only move a fraction of the distance the light moves ?
I was just wondering if you/Boris team or any lighting pros had any input .

The “pivot point” parameter in Sapphire LensFlare is the point at which all elements rotate/move. It is a 2D point in the frame – it is not a 3D point in space.

I really don’t think the pivot point moves around the frame when the light moves, but I may not be understanding what you’re saying.

No i’m not saying the pivot point should travel, & i understand it’s a 2D point in the frame,
I’m saying the distance between light - image sensor seems off when viewed, the pivot point is too far away, it’s in the middle between light & the screen/camera, it’s like an equal seesaw, light & flare travel the same distance when the pivot is in the middle of the screen,
if a seesaw pivot was off centre, one person would hardly move, the other would go up & down a long way,
same for the light & the camera, the pivot should be close to the camera so the sun/light moves a lot but the flare doesn’t move as much,
I might be over thinking & in totally the wrong direction, but it’s the lens that creates the flare, it’s the lens that projects the flare onto the sensor so the lens has to be the pivot point,
I’m not stating anything I’m just trying to understand this? 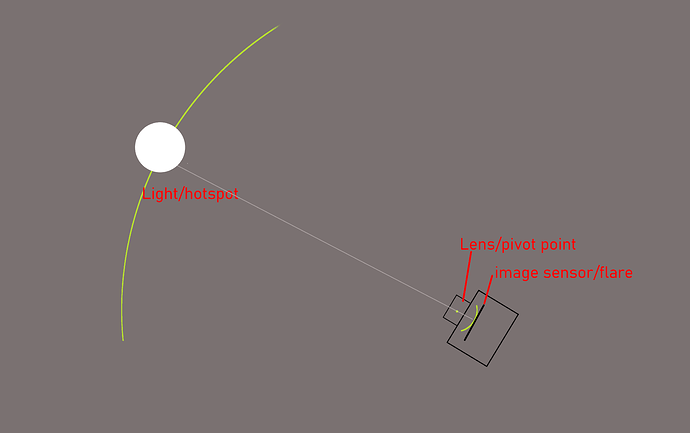 PS. like shining a light onto a prism to get a rainbow, the prism is the pivot & the rainbow is the flare