Some of the emitters have a series of graphics associated with them. For example - the number 1-10. Is there a way to create my own series of images? I cannot seem to find the original file that has the series of images that it draws from.

Hi, are you ref to the Shape Image?
the ones with 1-10 etc have a red Play button on the icon to show they are a series that play 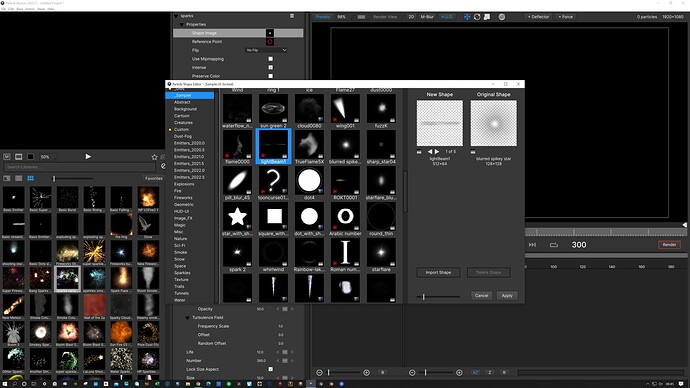 Have a look at this I posted a little while back
https://forum.borisfx.com/t/i-cant-import-shape-in-standalone-version/13185/4?u=gid.joiner

Yes that is what I am talking about. I was referring specifically to the NUMBERS and LETTER (1-10 and sets of letter) but I think it is the same idea of the subset of graphics.

There’s no access to the Shape Image presets that are in the editor, yes you make numbers & letters just like you would the graphics, if you want a specific set of numbers or letters then you’ll have to make your own, If you can’t do that, you could let me know what font or style & i could create them for you, you could then add them to the Custom folder as i showed in the link,
btw I know you just wanted to emphasise ‘numbers and letters’ but putting things in capitols is classed as shouting,

Thank you for you help and insight. I will try it on my own first.