Mocha appears to be ignoring upstream nodes in Nuke Indie

However, when I connect the output of the Corner Pin node to the Source input on the Mocha Pro node, I see the un-stabilized footage inside of Mocha for some reason.

I’ve tried a couple ways around it. I merged the stabilized footage over a constant and then piped the output of the merge node into the Source input on the Mocha node, but in that case the frame range disappeared and still displayed the non-stabilized footage, as seen here:

I’ve also tried clearing Nuke’s caches and restarting. I’ve also included a screenshot of the simple node setup I’m trying to use for this: 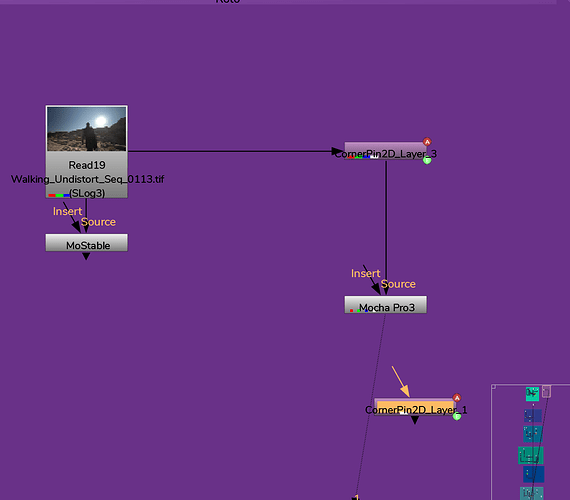 Edit: I added a grade node prior to the Mocha Pro node and those changes did show up in Mocha, so it looks like it has to be something with the Corner Pin node.

I truly appreciate any help! And I’m open to better workflows too if one exists. This footage has some fast camera movements and being able to roto on the stabilized footage is most ideal.

I am not in front of the system to test Nuke, but it sounds like Mocha is not seeing the cached output of the corner pin node. An alternate workflow might be to use the Stabilize Module inside of Mocha Pro (set the render output to Stabilize) and then you could do the roto after that.

Also to mention, you can use The “Quick Stabilize” button inside Mocha which is designed to allow you to stabilize the viewer based on a track. Depending on the shot – you might be able to get away with doing all the roto in one node instead of the separate stabilize process. Hope this helps. @martinb might be able to chime in when he logs in.
Best,
Ross

When you only see 1 frame in Mocha it’s usually because you don’t have the Viewer node connected to the output downstream. This is a quirk in Nuke where for some reason the sequence doesn’t send to OFX plugins if it can’t see it.

In terms of the actual corner pin output, that should come in directly, for example: 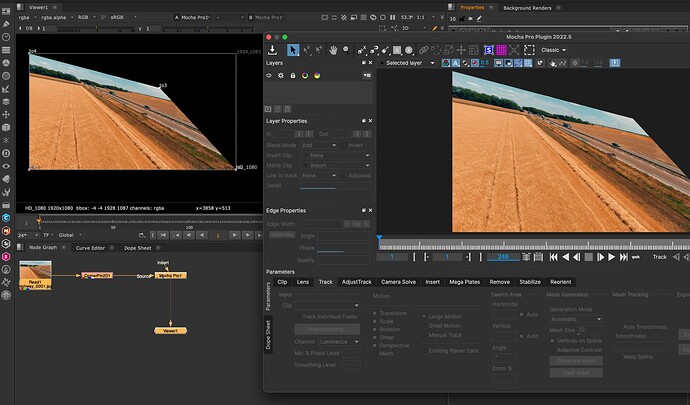 Oh yes, that screenshot is exactly what I’m after. I’m relieved to know some solution does exist! I double-checked and it looks like I’m on v9.5.2. I updated Mocha to the latest version and it still appears to be doing the same thing.

Interestingly, I was able to get it to work using the specific nodes you have there. I dropped in a CornerPin2D and made a quick adjustment to it as you did, and it came into Mocha just fine. However, the CornerPin2D I’m using is one that I’ve exported from the tracking page of Mocha. Still a CornerPin2D, but it seems there must be something different about the one being exported from Mocha. It also has a different color, if that’s anything. It’s very, very strange. I made sure to re-export the CornerPin from Mocha after updating in addition to clearing all of Nuke’s caches to be on the safe side.

I think what would be most helpful would be to determine if this is a Nuke thing or a Mocha thing, and at this point I have a hard time saying for sure. I recently moved from Fusion to Nuke and was able to do this exact node setup without issue, so it feels Nuke-related, but it’s hard to say. I’m happy to bug the Foundry if that’s what’s needed

Okay, try exporting the Nuke Tracker node from Mocha instead, then generating the corner pin from the 4 tracker points. It could be that the old format of the corner pin we use doesn’t work the same way as a modern Nuke 13 corner pin node.

No such luck, I’m afraid. I exported Nuke trackers from both the Track and Stabilize pages and I’m still getting the same result after exporting corner pin nodes from there. I will say I’m totally fine with using Mocha in Fusion to do my rotoscoping and export mattes from there for now if it turns out to be some kind of a bug. Since this exact method does work in Fusion at least to my non-programmer mind it seems like there’s something up with Nuke.

I’ve just done a retest with a fully stabilized tracker node and I can see the problem now.

Try adding a reformat node between your stabilization data and the next mocha node like this: