I’ve just installed Mocha 2020.5 on Centos. I’ve had an earlier version of Mocha 2020 working on my W10 build no problems. When I used it on Windows, pressing the “Launch UI” button would open Mocha with whatever the footage was that was pointed to the node input in Nuke. Now the footage pane is just black. I’ve tried different footage: some prores qt’s, exr sequences, even a jpg sequence because that’s what the help page about this issue said to do. No joy. The footage pane is always black.

I am going to connect you with @martinb because this sounds like a bug to me. If a JPEG sequence isn’t working that makes me think there’s something going wrong. We will have to test on our end.

For future ref, the issue is that CentOS uses the nouveau nvidia driver by default, which works fine for Nuke, but Mocha requires the official nvidia driver.

Installing that driver is a pain. You have to disable nouveau, then exit X, install a bunch of dependencies, and even then it didn’t seem to work for me. Luckily, there is a very useful project called elrepo.org that does all this for you with just a few short terminal commands.

As soon as I was using official gfx drivers, Mocha’s viewer pane showed all images.

Oh good, I am glad you let us know. Thank you.

Hi there. Our facility has recently switched from physical machines and macOS based, to AWS on CentOS 7. Our compositors are all reporting that mocha OFX launches and the image is black, closing the mocha UI and then opening it back up seems to work. We’d love to know why this is happening.

Since we are using Teradici and AWS all of our CentOS boxes have the latest NVidia drivers loaded and we are NOT using the nouveau drivers.

What version of Mocha Pro are you using? And what specific drivers and Nvidia cards, there’s many current/latest driver branches.

Thank you, I will bring this to the attention of @martinb.

If it’s opening on the second attempt it sounds like an initialization problem. Do you have all the required dependencies installed?

We only found these two requirements in the install docs for Mocha and they are both installed:

No, those are the standards, so that should be fine.

Are you using EXR footage with alpha? Is the screen in Mocha actually black (i,e 0,0,0) or is it the canvas color?

Can you show the screen? 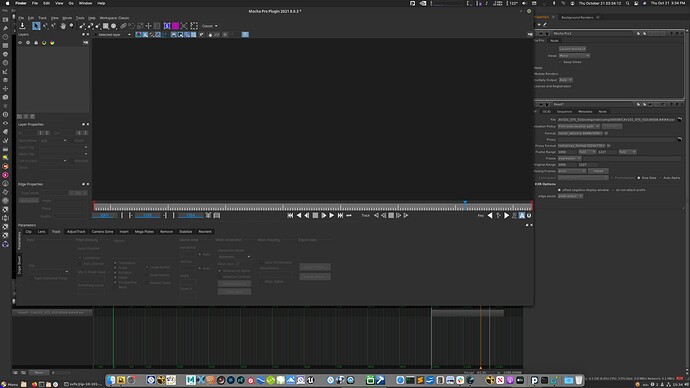 Typically we are plugging this straight into an EXR plate which does not have an alpha.

If you turn off the “A” (for alpha) in the View Controls at the top of the viewer, do you see your shot?

Seems like toggling “A” does the trick. Is there any reason why this is happening or is there a toggle to disable that so we save a step when tracking?

If you have pure RGB EXR files, I recommend shuffling in an alpha channel of 1 in a node before the Mocha Pro OFX input. Nuke sends us an RGB EXR with an extra alpha channel set to zero, which is why it comes in black. Also if you have a standard RGBA EXR file the problem shouldn’t happen.

Seems to be working so far. Thank you!
In future, it might be nice to know that Mocha is premultiplying something. A red boarder for example might indicate something Mocha is doing that is not initially obvious.

No worries, we’ve got this recorded as a defect, but we have to determine if it’s on our side or if we have to chat to the Foundry.