Situation: a compoundclip with a track and I want to insert 3dtext (fly over) on ground(snow)level. The “perfectness” of the tracks are not important to me, as this is just training, but the insertion is.

So far: tried combining vr insert (no luck, and this doesn’t work with the 3dtext), tried following Ben Brownlees “03 Using Fusion Modifiers to Track Effects [Boris FX Mocha Pro & Blackmagic Fusion Compositing]” - but I am missing something (mocha is relative new to me). This might also be a 360 thing?

Basic question this time: How do I set my mocha up and link/modify with my 3d text with my mocha track? I might be on a completely wrong course, so feel free to erase and rewind 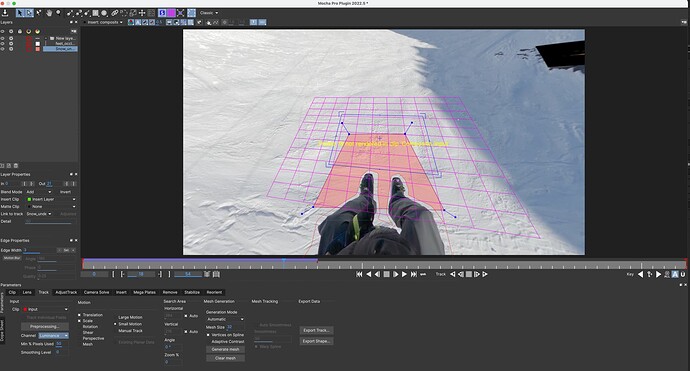 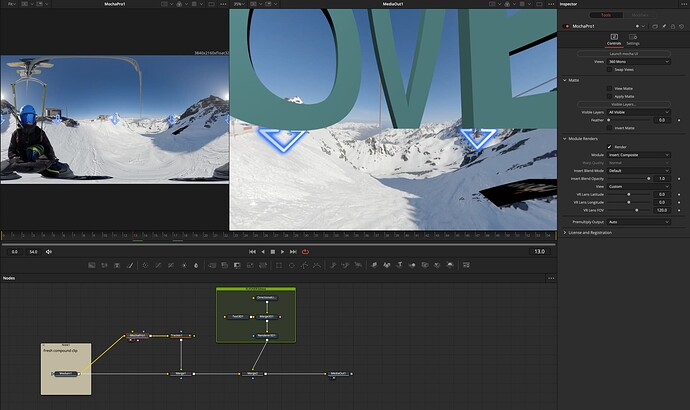 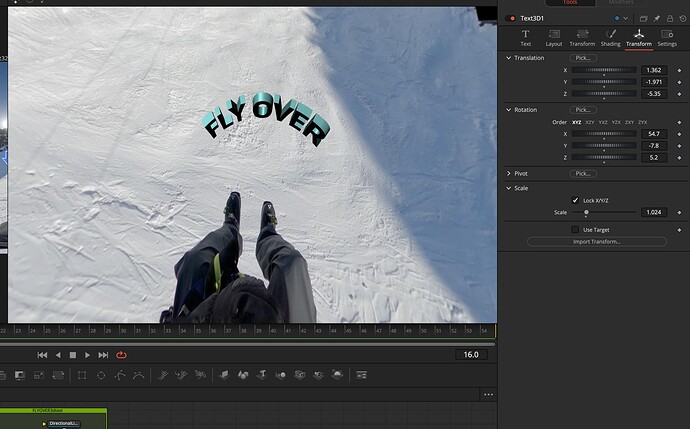 So, this is an edit - I realized that this probably is a solve task - which I can’t do in 360 apparently. There must be a way to resolve this.
Something like Hughs video : How to Integrate 3D Objects onto tracked 360° Video with Element 3D - YouTube
I did a little setup in fusion with latlongpatcher, which gives me access to the solve tab. I need some help in solving this though. (Either I’m pretty stupid or I’m the only one wanting this feature).
I also looked at one of your older tutorials which is what I want, but again 360 is the problem. 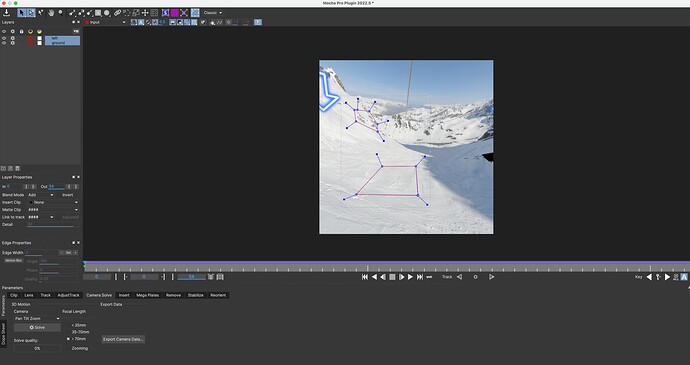 I need to get where I want to go on this one, this is a major bummer for me if mocha can’t be combined this way in fusion.

We don’t support 3D solving in 360 videos yet so you’re going to have to find a different way to approach this. Most of the 360 workflows in Mocha are for stabilization, 2D inserts and object removal, not the 3D space.

The best you’re going to be able to do in the Mocha space is render a 2D insert to the 360 video or flatten the 360 views with the Lens rendering then re-distort it with your text render, but that still won’t be truly 3D.

Do you just want the 360 view to fly overhead of the camera?

Hello Martin,
Thx for your reply to my pretty confusing message. I’m not sure I understand what you mean by your question. My thought is to slide over 3d text and then mask out my legs so it looks like it is on the ground beneath me.
I can do this in fusion inside a sphere (no masking this way), but here I have to move it with keyframe and I would have loved to use the 360 tracking (which by the way works fantastic) and link this to 3dtext/obj files. Or get a point cloud out of a lens distort/undistort (as Mary writes in an earlier message years ago) - and then place this pointcloud in a fusionsphere. Alternatively I could “live with” a quickfix where I link my vr insert (fake3d) to a tracked planar. turning the textnode at the same time, would give 3dtext as long as it’s not a fly through. It seems like the tools are there, but I’m not at a level where I can combine mocha and fusion this way (I’m still struggling with figuring out how to take tutorials from AE to fusion - I don’t think that I’m the only one who could use at least some screenshots of how null layers etc. would look in other hosts, in my case fusion - I guess that is a wish for Santa:-)).
If you have some hints I can explore in context to the above, I’m all ears. If not, then thanks for your time and I will keep learning - I do really like mocha and my frustrations are not suppose to be perceived as negatively charged.
Regards Soren

You can insert the text in 2D, but the problem is the 3D aspect of it. The perspective of the 3D won’t change in our 360 renders. For example here, this 360 VR shot is being inserted with 3D text in fusion, but it is only rendered on a 2D plane: 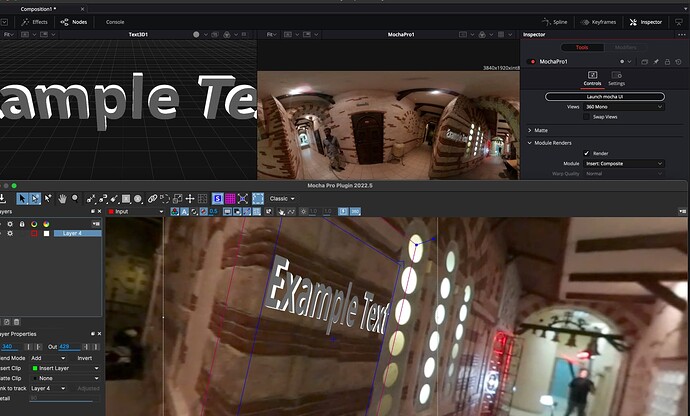 To do a 3d camera solution to match the 3D you would need to undistort the camera to a specific view, track it, place the text in 3D then rewarp the image so it distorts in 360, but it would be a tricky approach.

I will focus on all the other good stuff and move on. In time I guess I can look into syntheyes or something like that. For now I will work on mastering mocha - I cross my fingers for more resolve tuts. Thx for your time./ Soren