I’ve spent a while trying to figure out how to use Mocha in Fusion, since the Mocha Essentials course with Ben and Mary is all done in AE. The Mocha node in Fusion is really only useful for getting the video into Mocha. Actually using it to do anything is useless. So if you’re in Fusion, you need to export (copy and paste) the Tracking Data and the Shape data separately into Fusion, then connect everything like I did here. It would be nice if Boris would actually make their Mocha node fully functional… 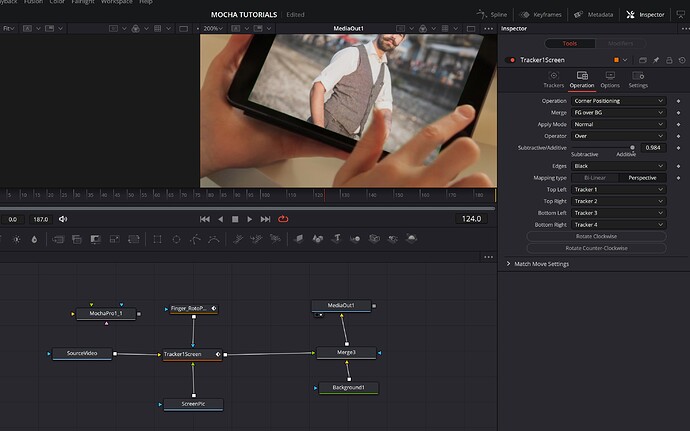 I’d recommend following this series by Ben Brownlee for Mocha and Fusion:

The problem we’re facing is that OFX is a universal plugin format with very specific architecture and we support at least 7 OFX hosts.

Making sure that custom plugin UI works for each individual OFX host means making very specific changes for every host. Sadly it’s not as simple as dropping in a few extra bits of UI.

For the time being, this means we can only support render modes directly out from Mocha because every OFX host directly supports OFX render output, but not access to other nodes/layers or any way to output the kind of data Mocha produces.

Until we can find a unique solution that caters to the way each host interfaces with data, we have to work with the individual host software developers to create plugins that work specifically for that host.

If you use Premiere, for example, it shares the same Adobe version of the Mocha Pro plugin as After Effects, and we’ve had to restrict certain items from appearing in the UI because Premiere doesn’t support everything After Effects does.
The reason we can offer such a deep After Effects integration is because of their comprehensive API.

The TL;DR version is: We’d love to make it easier for OFX users, but OFX doesn’t offer any access to other nodes/layers or any way to output the kind of data Mocha produces. The advantage of having the plugin is being able to make upstream and downstream changes to the input and output without having to render them to disk. The downside for the moment is you have to use the full Mocha UI to get the data out.

In all honesty, it may be worth considering dramatically elevating the level of integration with Blackmagic’s software due to the snowballing increase in the popularity of Davinci Resolve and Fusion Studio. At some point, some company is going to fill this void. It’s going to either be BorisFX or some other company. And, in all honesty, this lack of proper integration with Resolve and/or Fusion recently kept me from buying the Continuum full suite.

What’s confusing is that the Mocha node has controls for the matte, but not the surface track. Another thing that leaves me scratching my head is that both Sapphire and Fusion are node based but I have to use the full Fusion Studio to use Sapphire for anything more than the basics, and even then it’s incredibly unstable. Also, the fact that Continuum only accepts vectors from AI v 8 is insane.
And to expand on fughe’s point, when I was at NAB PostProduction World in April, there were very few people in the Adobe sessions, but the Resolve sessions were nearly SRO. People are leaving Adobe for Resolve. Some people may not believe that Premiere and AE will be replaced, but that’s what print designers said about InDesign vs Quark XPress.

What’s confusing is that the Mocha node has controls for the matte, but not the surface track.

This is because the Matte output options are for rendering a matte and the tracking data is not. You can get surface renders, but you need to use the Insert module for that.

The limitation for accessing data is mainly by what we can access with the OFX plugin format at this time.

But I hear your point. Yes, a native plugin in Nuke, Fusion, etc would be ideal to access all the information.
The development time to implement and maintain several different plugins with wildly varying APIs is significant, however, so we cannot promise anything. It’s one of the many reasons why so many hosts support OFX. Currently, the only limitation is that you have to be in the Mocha UI to export specific data.

Side note:
@bruce2 and @fughe if there are concerns over Sapphire or Continuum format support, I’d recommend asking about it on those particular forums as you’ll get a more specific response. This forum is just about Mocha Pro.