I was working on a track and, while attempting to show a fellow employee something, moved Mocha over to one of my monitors (a connected 1080p TV). The interface immediately squished down and I couldn’t do things such as move the time slider down to give the viewer more space. As such the viewer was so tiny it was basically zoomed in on the what looks like the lower left hand corner. It’s a solid color and when I scrub through the timeline, the color changes (to other solid colors).

No matter what I do, I can’t get the viewer to properly show the footage again. I’ve deleted all preferences from the windows registry - shut down - restarted the program. Everything. Whatever viewer setting it is, it keeps them … no matter what I do to reset the layout it never changes.

Here’s an imgur link to show what I mean: 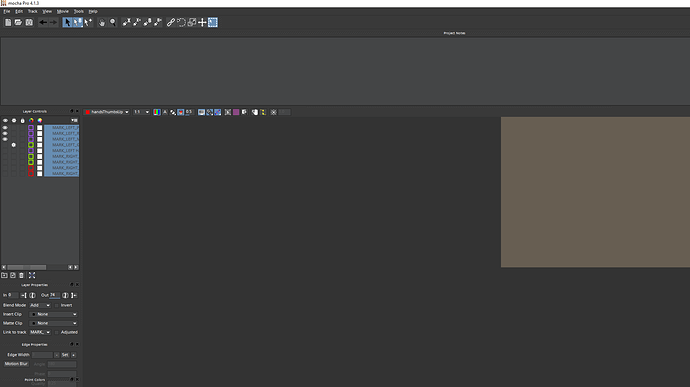 Oh, that’s odd. Can you try reinstalling? That’s a weird bug, and I am unable to repeat it.

Welp went through and did a reinstall (even wiped every mention of Mocha from the registry after the initial uninstall) and no dice. Opened the file and it’s still stuck on that lower lefthand pixel. So strange. I’m guessing the file is just weirdly corrupted.

I couldn’t replicate it either although I could, once I moved Mocha Pro to a different monitor, manage to get the UI stuck by quickly zooming in and out and panning. But it eventually became unstuck after just waiting a few seconds. This just appears to be permanently stuck.

OK, I am asking our product manager, Martin Brennand, if he knows what’s up there.

Hey Mary - I did try making a new file and seeing if I could get the issue to replicate and while I could get it to stick from time to time it never got permanently stuck.

And then unfortunately I overwrote the file (original file was named from the file sequence and accidentally overwrote on a reimport). But I didn’t really lose that much work so no big deal.

After this project is done I’ll try to recreate it, but otherwise I’m just going to chalk it up to a one time thing. Thanks!

OK, great, thank you for letting me know. Our dev team is aware of it and we will keep a lookout for it in the future. Sounds like a one time thing. But if it isn’t, let us know!

Have a wonderful day!