Must be a better workflow for Removing

Yikes! I finally managed to slog my way through what ended up being a tricky removal shot, but there’s got to be a better workflow that what I used. New to removal as I just took advantage of the sale to upgrade.

Anyway, the shot I’m working is from an 8mm color neg original, digitized to 1920 X 1080. The client wishes a car to be removed that enters low bottom left goes through a turn passing behind a couple of fence post and exits even lower frame left. 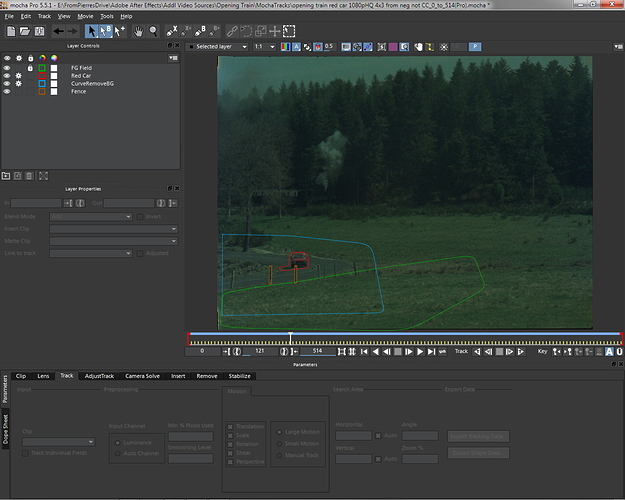 I got everything working swimmingly except at the very edges of the frame where car enters and exits the frame. Part of that was the clip cropping mask being a bit off, but not entirely.

I was able to create two clean plates but at around 170 frames apart. That worked well for the problem areas, but couldn’t use that all the way through the shot unfortunately for some reason. The documentation is a bit skimpy on use of clean plates. I think there’s a means for setting a range, but no syntax examples. So, I basically did the shot in three sections & exported separately; Head & tail with the clean plates and the bulk without. Would have been nice to be able to key frame the On & Off of use in this case.

Never did figure out why the Fence splines needed to be at the bottom of the stack even though it’s obvious that they’re the closest to the camera, but the result wasn’t pretty otherwise.

Any pointers for next time?
Thanks.

There is a screen grab link that’s not showing up there in the gap between paragraphs 2 & 3. Hover and it’ll present itself to click on.

It is difficult to say without seeing motion… is there a lot of parallax in the shot that would make the road motion different the tree. Potentially different planes in your track? Before doing any remove, it helps to make sure the layer’s track is rock solid by viewing the surface or grid.

As far as clean plating, we typically use the “create clean plates” button and try to create a clean plates where lighting or perspective is different.

Any chance you could upload the shot and project? Might be a good one for a tutorial.

The original is over 440Mb but maybe I can make a clip of just the pertinent section. Might be a few days though. It’s really a pretty straight forward shot. Someone with a hand held 8mm camera basically standing in one spot and follows the locomotive.

As I tried to state before, I DID get a successful set of remove frames, but I had to render in sections, with and with out clean frames. I just don’t know if that’s normal. I’ve heard mention of doing multiple passes for removal work but haven’t found any specific tutorial on that.

I checked with the producer and he’s not ready for letting anything get seen just yet. The project hasn’t released yet so I can understand. Perhaps later though.

Without seeing the shot it’s impossible to say.
All I can tell you is that I do remove work on a few reality shows at a time and sometimes one person can do about 100 shots a week.

So there are some really easy work flows out there… As for multiple passes, I’m not sure what you mean if you refer to only needing to fix part of the shot put a mark in and a mark out, do your fix, when done remove them and render the entire shot.

With multiple passes you mean fixed one element render and then go back and fix another element… Are usually work inside Avid with the mocha plug-in and layer it.

You are receiving this email via my mobile device. Please excuse any spelling errors, sentence fragments, repetitive phrases, typos, grammar mishaps, etc. Please know that I probably talked to the phone and Siri doesn’t understand my English…or Hebrew. Sent from my iPhone 10

It sounds like you might only need one layer to solve this if there’s not a lot of parallax, this shot may be over-engineered. Have you watched our remove module overview videos? They really help understand what Mocha needs for a solid remove. The best tutorials for remove are the following, we have a video series on the basics of the remove tool, part 1, 2, and 3:
https://vimeo.com/104991815
https://vimeo.com/108072190
https://vimeo.com/120759421

I’ve watched all I could find tutorial wise. When I get permission (which may not be for months now it’s sounding) I’d like to get a copy of this clip to you folks to see how you’d approach it. Quite possible it’s over engineered, but I got it to work which of course was the main goal.

No, my confusion with the workflow is when I have to do the remove in sections and not really sure how to handle that when it comes to keeping things organized. For example, I needed clean plates at the head & tail, but couldn’t use them in the middle so had to disable them for that section. Should I give each remove section a different name? Do I have to render those out from the File menu separately then for their corresponding frame ranges? Or is there a totally different, simpler approach?

That’s essentially what I ended up doing & then just assembled in AE. Just seems that there must be a more elegant method.

As an aside, there’s a separate issue that I’m dealing with Martin via tech support. We (I) suspect the source Prorez mov material is somehow fooling Mocha in that DPX or CIN files from the Remove process are getting written out as 8-bit. I’ve converted the mov to a DPX sequence that I will test this weekend & see if the result files get written out at proper bit depth.

I am happy to take a look when you have permission. Though you can email it privately instead of putting it on the forum if you’re worried about privacy either way.

I’d do two renders in this case, one with cleanplates and one without and composite them together in a compositing software. Sometimes if it’s a tricky shot this works best for me. Which sounds like what you did.

Good to know about the side issue, glad Martin is on it, prores sometimes does throw things for a loop.

Ya, just sent him a detailed replied, so some issues going on there.

However the BIG take away here is that when I finally swapped out to a DPX sequence instead of the mov file, the Remove was painless. I didn’t even have to make or use Clean plates. Rendered & removed the entire range in one pass. Couldn’t get simpler than that certainly. I suspect conversion to a sequence will be a standard step for me now if doing Mocha Remove work.

Unfortunately though, at present AE CS6 can’t recognize the resulting DPX files even though it (AE) was used to convert the mov file to the DPX sequence in the first place. The result files Mocha is making are 16 bit & AE wants 10 bit DPX’s. Of course.

Don’t know what the DPX standards are so can’t tell if this is a lacking on AE CS6’s part, or an over exuberance with Mocha, or whatever. Hopefully just a minor gnat in the clockworks & easily fixed or worked around.

That’s the issue Martin’s tracking down now, or will be when he gets his mail in the AM.