Hi all,
I’m using Composite Plugin in Avid and I am trying to remove dropout from some old tapes. What I have done is to digitise the tape twice. The dropout occurs in different places on each capture. I have overlaid the two tapes ontop of each other and then applied the composite difference to the top layer. This isolates all the differences between the two captures (i.e. the dropout). What I need to do though is reverse this effect so that all the dropout is replaced with the clean shot from the alternate capture. Is this possible?

the attached file shows a side by side comparison of the effect with the dropout really visible on the Right. 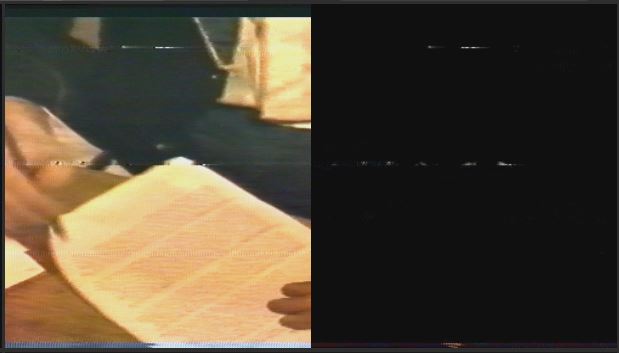 This might sound like a really dumb question, but why aren’t you using BCC Dropout Fixer. It’s for exactly the problem you’re having…

Thanks for the thought Kevin.
I did take a look at it but it is by no means automatic and can only fix one dropout at a time as far as I can tell. This tape is covered in dropout for 20 minutes!

What if you were to use the difference result as a track matte? Would that do the trick?

Unfortunately this problem is a bit more complicated. I’ve been trying to work it out: basically I have Video A and Video B. Difference mode gives me the Sum of the differences between A and B. What I need is a Sum of the similarities between A and B with the differences removed.
Since I have a Sum of the Diffs a simple track Matte wouldn’t work I don’t think because you have two sources that need combining.
I need the Diff Matte from A to take the fill from B and the Diff Matte from B to take the fill from A and then the two results to be combined.
If I can get my head around it I’m going to see if I can achieve this in AfterFX.

I wonder if there is just not enough information to solve this problem “automatically”. If you have the Diff between A and B, it is not clear to the software which of the two is correct - it just detects that they are different. The “correct” result will vary from one shot to the next with it sometimes being from A and sometimes from B. So i don’t see how you could construct an AE project that would know WHICH of the two is the right one for any particular difference. One possible approach, which admittedly gets even more complicated, would be to digitize yet a 3rd time. Then you could great another set of diffs. So you would have A to B, A to C, and B to C. If the artifacts really are different on each copy, then generally two of them should match for any particular region so you know that the two which match are the “right” result. You could diff A and B, then for regions where there are a diff you could diff A and C and B and C and you would know the “correct” data is the one with no diff between AC or BC. It would be complicated to set up but might work.

I beginning to think you are right jc. I can get a beautiful playout of all the dropout from both passes. But reversing that is elusive because my Matte is the sum of all the errors whereas what i actually want is the errors from A & B seperately and then clean footage from the alternate keyed into the errors. Not so easy!