Is there a way to overlay one video on top the one you are working on and use it as a reference to adjust the clip below? I only need to adjust the second clip. Any advice would be appreciated. 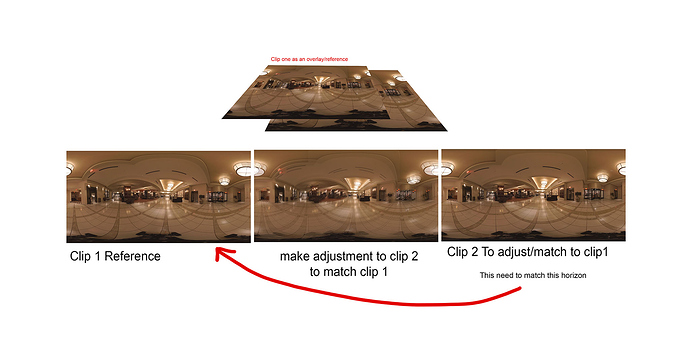 There is not really a way to onion skin in the way you describe. You can use the Insert Module to mix layers and change opacity, but for Reorient, does not really work. One workflow that I come up with is channel your comparison clip into Mocha. If using standalone, you can import via clip tab. If using plug-in, you can use another layer in your comp and set the Layer Input to be this 2nd clip. Then you can flip back and forth between your reorient and the comparison clip before rendering. See attached file/. Hope it helps. Maybe we can add Guide Lines as a feature for next release. I think some users might use to additional reorient effect after the reorient stabilization in Mocha in a host like AE and than you can mix opacity between 2 layers for more precise matching. 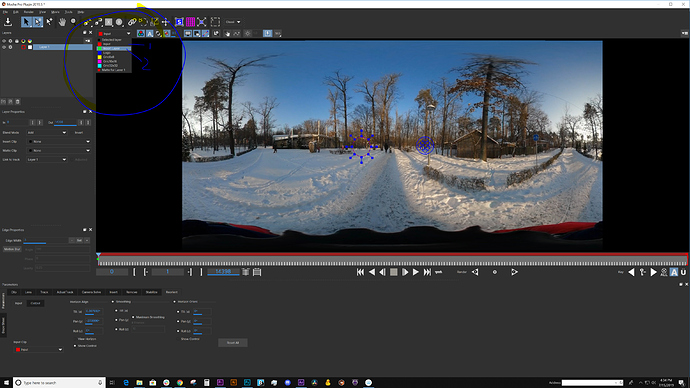 You also might get away with this using a few layers, the difference blending mode, and the Continuum VR reorient to line everything up. When the image is black,it will be lined up, because of the “difference” filter. I find that works better than opacity.

Rosss,
Thanks so much. I will try your suggestion. Guides would be a great help. I toggle back and forth between mocha and AE to use their guides.

Hi Mary,
So i would need to install continuum and use the vr orient effect vs opening mocha? I tried installing the trial over the weekend but several of my ae files wouldn’t open anymore until I uninstalled it…was strange. I will try again.

Yes, but you can also just get the continuum VR unit as a smaller install. That’s interesting that files wouldn’t open anymore, can you give us more details?

Hi Mary,
Any chance you could tell me where the Vr unit would be located at as the smaller install?
thanks.
Here is the issue i had over the weekend.
I installed
Continuum_2019_5__Adobe_12_5_1_Windows.exe
and
[BorisFXApplicationManager-1.0.6.21.exe]

I just wanted to test the trial.
After install the AE file i previously had open a few minutes earlier wouldnt open. It just stayed on the spinning circle. I tried several times. Since i was on a time crunch i just uninstalled and then the file opened. Very strange…will try to reinstall again later when i find more time to troubleshoot.

I reinstalled and it looks like its working now. I installed the free trial but never received an email with any license. it said to contact boris if i wanted a watermark free trial. Any help with that would be appreciated.

Note that the VR Unit uses the same installer as the full product. The license string you enter will determine which subset is available for use without watermarking. In free trial mode you don’t need to enter a license and you will see that all filter categories appear. You can can still evaluate the VR category this way since it will work identically apart from the watermark. To discuss the watermark you would need to contact the Sales team.

I tested the trial and its seems like the VR unit is very similar to the vr rotate sphere that is included in AE and Premiere. I ended up just using mocha for the initial horizon correction then in premiere used vr orient for the fine tuning using a difference blend mode as Mary suggested. This is working well so far. Thanks for the help.

Great - yes I was going to say that the VR Unit does not replace Mocha Pro for the horizon stabilization part of the process.

You maybe be interested to find that the Continuum VR filters handle higher resolution workflows better than Adobe’s which do not have a CPU fall-over. If you ever see the GPU error message when using Adobe Immersive, - try Continuum. Additionally the VR Unit filters are cross-host and run in Avid, Adobe & OFX.

Lastly - take a look at Continuum’s VR Sharpen compared to Adobe’s - a lot more options and latitude to improve your footage without artifacting.

overlay one video on top the one you are working on