There was a great particle emitter that simulated a phaser beam (similar to Star Trek: TNG).
I was surprised to see that there are no laser/phaser beam emitters in the new 2022 paid version. (the kind that is shot from a phaser pistol)
I still have 3.0 installed, but for some reason I couldn’t find that emitter. And I know it existed because I used it in making a video. It wasn’t custom made either, I believe it was a standard released emitter with 3.0.

It was one of my favorite emitters to use. Is there anyway I could get a hold of that emitter, or is BorisFX planning to offer one in the future? (And I’m not very good at creating my own custom emitters)
Thanks! 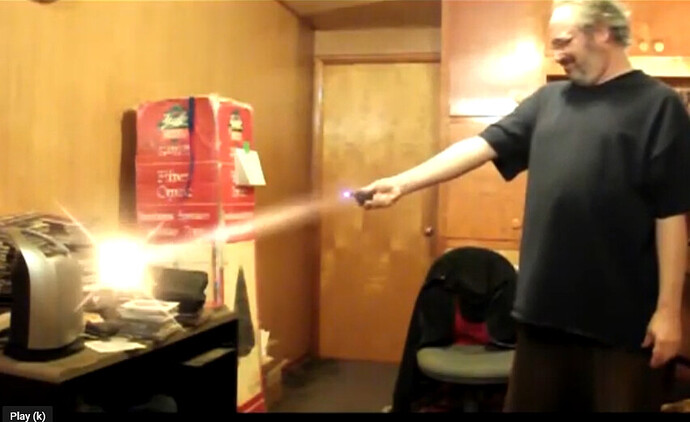 In addition, to the phaser emitter, I used an additional “flash” emitter on the target.

I’ll see if I can find it. Always looking for ideas for emitters, so good to bring this up.

Hi, there’s a few Beams on my PI, do you think it was one of these? 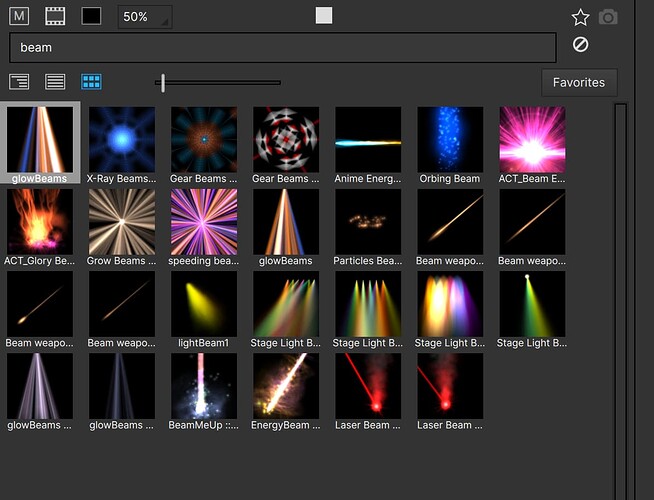 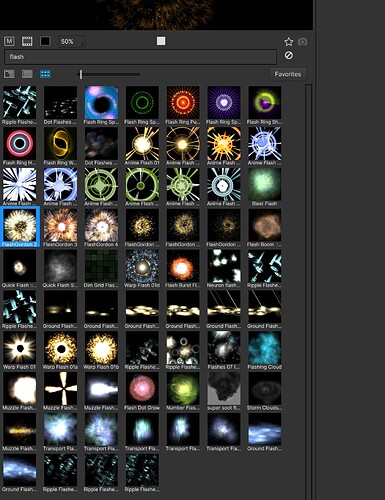 I searched on “Beam” using the legacy libraries and found the attached. (File - Open Project)
I searched “phaser” and there were 0 results.

Looks like 4 of the 5 exist in the new libraries too. If the one you remember isn’t there, I’ll have to search on something other than “beam” but don’t know what…

Hi, that file is a BPI file,
can you remind me where it goes,
thanks] 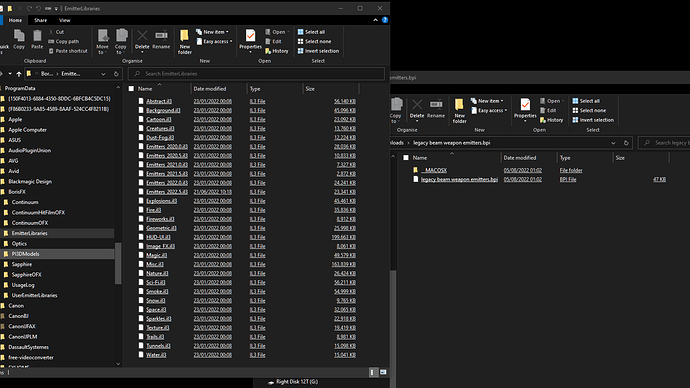 The only one that is similar is the Anime Energy beam, which will work but it would take some adjusting to make it like the old one. The other ones, like Beam Weapon, only last for a few seconds. I needed something that is sustained.

Yes, I’m not sure how to use a bpi file either.

Alan, the file you sent me is the same emitters as the Beam Weapon Test emitters in PI 2022.
The one I was looking for had a sustained beam, not just firing in spurts.
But thanks for looking!

Here is the actual animation in the video I made. The effect starts at 1:00 into the video 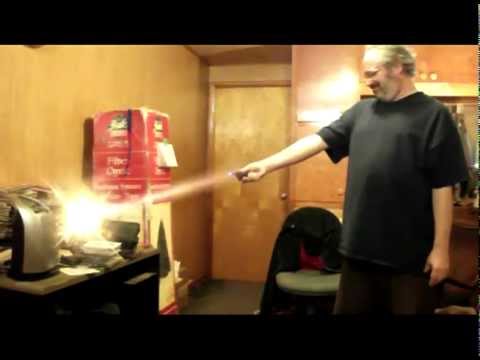 Alan_Lorence
Well, I finally found what I was looking for. And you were very close in what you sent me with the group of “Beam Weapon Test” emitters. But it was missing the constant beam.
I dug out my old portable hard drive, which had all the old pI3 emitters. And it was from the
Emitters 07_03.il3 pack. It’s called “Beam Weapon Test 01 Constant”, which as I said was missing from both the new Particle Illusion 2022 and the zip file that you sent me.

Thanks again for looking, I appreciate it. You were very close…LOL!
(I also found a lot of very cool legacy emitters that are not included with 2022 version)

For some reason that “Beam Weapon Test 01 Constant” was renamed “Flare Jet 01” in the project file I sent – it had the “Beam…” name in the Emitter Library.

And for those who are asking how to use that file – I did note “File - Open Project”, but I guess I should have made it more clear.

Unzip the file anywhere, then use the PI “File - Open Project” menu to load it.

Alan - Okay I see it now. It was positioned off the preview screen and I missed it.
I’m wondering why that one wasn’t included in the new versions of Particle Illusion?

Anyway thanks again for finding it.

HI @Leee414 ,
Thanks for sharing that amusing video! Do you mind if I ask if your old PI3.0 version is still working? Thanks!

terrerad,
Glad you liked the video. (although since I made it, I’ve come to like Joni Mitchell…go figure)
And yes I still have PI3.0 installed and have been using it until I get my new graphics card next week.
Then before I uninstall it, I want to make sure I have all the emitters that I like that weren’t included with the latest version.
Lee

Hi @Leee414,
I am envious that your copy of PI3 still works. Both my installs went black and the authentication server no longer works. I had a couple of old projects that I had wanted to complete. Joni does grow on you with repeated listening.

A few years ago I sent to Alan a library with Phaser effects. He actually added them to one of the regular downloads. I had TOS phaser, TNG, TNG movie, Terminator Plasma gun (looked ultraviolet) and, IIRC coreectly Smallville Heat Vision. Plus Photon and Quantum torpedoes. Single shot and constant beams.

It was called Lexpro’s Energy Weapons

Do you still have a copy of that library somewhere?

If not, I’d be happy to work on some phaser-type effects, but I need reference clips! I’m sure they exist on YT, but if anybody can find some examples – share a link with start time so I don’t have to skim through long clips.

Hi, I know you’d prefer not to scroll through but when i commented on this post before i Googled Star Trek Phaser, there’s a myriad of them over the yrs,