Hi,
Downloaded Continuum today, using PI OFX plugin inside Davinci Resolve. Up front, I apologize the question flood, but as there is no search on the forum, I just scrolled through the first 50 posts on the “Latest” tab…

#1 How do I link the PI FPS with my project FPS? The PI generated VFX seem laggy, when putting it on an image… If the BCC PI effect takes the FPS from a video clip only, that doesn’t really work if I have pictures/slideshows I want to use it on.

#2 Why is Beat Reactor’s "Import Audio File “AIFF only”? I’d prefer to get the “audio data/events” from external sources as I would like to “sync” the reactions by eye…

#3 When I place a BBC PI effect on a clip (tried Video and image) and “launch PI”, I was expecting to see the “destination footage” - i.e. the thing I’m putting it on. Is it not how it’s supposed to work or am I just not doing it right? Also adding the PI effect on a clip makes it super laggy. PI enforces its FPS on the clip?

Here are some answers to your questions :

(1) PI, when used as a plugin, takes FPS data from the host and that cannot be overridden if your goal is to render from within the host. If you wish to override the host FPS, you can render the particle system directly from the PI GUI and set the desired FPS in the PI export panel. Then you can import he rendered particle system into Resolve and overlay it on top of other media elements in the timeline.

(2) We are currently only able to offer full support for AIFF in Beat Reactor but have been investigating other file formats. In fact, if you are in After Effects, the Adobe API is such that we can not only pull up source audio directly from the timeline but also import mp3 audio. So some host API’s are more open than others and we can only work with the tools that are provided to us. But let’s see how we make out with the OFX API and extending audio support in the Beat Reactor.

(3) In order to see the host media, you need to set the preview option in the PI GUI to Composite Over Source Video. The button for this is the one to the right of the zoom percent field just above the Stage.

(4) Any lagginess that you’re seeing is not related to FPS settings, it’s just that PI is calculating thousands of particles on the fly, taking into account deflectors, masks, force fields, fluids etc and compositing them back into the result. Once the host has cached the timeline render the lagginess should disappear.

To search, look in the top bar with the magnifying glass icon and gray text that says “Search the forum…”
The forum search actually works pretty well.

Ah! Found it, thanks

I made a short video demonstrating the behaviour I’m having. I’m using just a static image here, but the same happens with video clips.

The video is unlisted and I’m posting the link only here.

Hi, i just tried this, the Crystal PI you added won’t stream across the screen because it’s an explosion of ‘flowers’, it only lasts a short time, you’d have o change the PI emitter parameters ,
The jiggly dots work, but is very laggy as you say
I set in Playback - Render Cache - Smart, it took a while to render the blue line across the top of the timeline but it eventually worked smoothly,

Holy macaroni, that’s a lot of juice! I tried with “endless” dust particles, “fireworks” and many others. Tried setting the render to smart but that didn’t have a huge impact… I think the bubbles are smooth in your video. I think they are supposed to “randomly” die and spawn as they are some kind of bubbles… My CPU is nowhere near you specs but I am not ready to invest in $5K computer just yet

I will try to reinstall Resolve and reset the config etc. and see if that helps… Thanks for the assist 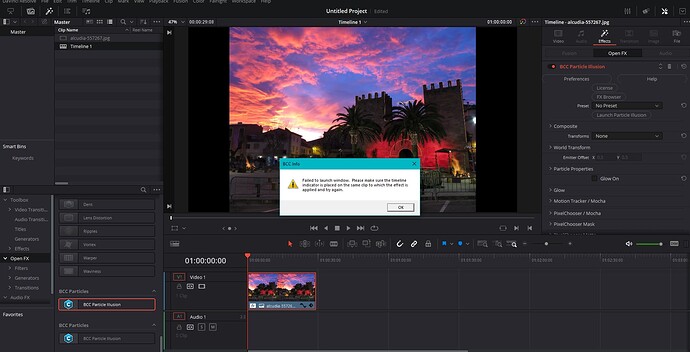 Yeah, no… Maybe it works with AE and some high-end machines, but not my set-up

P.S. But actually the caching works in Resolve 18 (Or might have been the re-install) but it does take a million loops to playback before it’s cached… Couldn’t imagine doing minor tweeks and waiting 10 minutes every time to see how it looks. Once the caching is ready, it’s still lagggy, though… Tried it with several endless emmiters like pixie dusts and fireballs. Tried it on both, images and videos. It’s all laggy. I don’t have any problems with using Fusion and the stand-alone PI works nicely. Why there is no “composite over video background” I’ll never understand, but even the stand alone PI is “nice toy” for doing graphic animation overlays, but at least for me the “paid version” doesn’t work. I’m guessing it’s something to do with Resolve’s OFX support but I guess I’m the only one as I don’t see many Resolve related reports in the forums. Or everyone just using AE?

I’m on my phone so can’t share pics but forgot to say i had preview set to quarter, i work on a 32" 4k screen, the preview option (Quarter, Half, Full) doesn’t need to be any bigger than the on screen preview window, if that makes sense,
PS, Cache - Smart caches while your not doing anything, so leave the program alone for a few seconds & the cache will begin, I find that’s a bit quicker than loop playing.

Yeah, I have it on quarter, too. Always be working

So, yeah… Adding BCC PI OFX effect on a video clip in Reolve instantly makes the clip laggy, before even doing anything. I’m not sure and as a potential user I don’t really care… I won 1-year subscription for the BCC PI plugin, but after a week of fiddling with it, I don’t think I’ll be using it. I wonder if I could give it away (not sell) or something?