I just purchased Continuum b/c I was impressed with all the videos highlighting its overall functionality and capabilities extending beyond what I natively get with DaVinci Resolve 18.

But after following a few tutorials from the BFX site and acquiring a very good key; when I hit the playback, rendering of the clip began. After only a few seconds of the initial render, I played back what was rendered and was satisfied with the result. So I began playback of my composite from the beginning and left my studio to allow time for the rendering to complete.

I returned back after 2 hours and the rendering was still running.

This clip is only 3 mins. in duration and has 1 underlying jpeg image as a background. So now I’m scratching my head trying to figure out why it would take 2+ hours to simply render a very basic composite 3 min. clip and I am totally baffled.

System specs are in my sig and I’m hoping someone will be able to suggest a way to potentially resolve this. Love the results but waiting hours for a short clip to render is a bit more than counter productive.

Definitely sounds like something is going wrong there. Let’s start with your system and project specs - could you send that to me please? Also, please save a preset from the BCC Primatte Studio Key that you created so that I can load it and see which features in Primatte Studio you’re using.

Thanks so much for responding! After some sessions with Black Magic Design support and trying a number of different configurations, I was able to reduce that time significantly to what I’d consider a more reasonable span. Primatte Studio does appear to have potential for being a very resource intense plugin so those tweaks helped.

However, I am still finding quite a few quirks with the plugin so I’m now questioning the compatibility of it with Resolve 18 since I’d also found that the Title Studio wasn’t included in my purchase b/c it doesn’t work in Resolve either.

Other issues I’ve noted are the floating UI in Primatte that presents many of the same features and settings (as far as I can tell) is so garbled that it is unusable to any degree. Please see the below screenshot:

This has been happening since I first purchased and installed the suite of plugins.

Also, all videos I’ve found on the BorisFX site as well as those I’ve identified elsewhere on YouTube show active tracking on the timeline once the subject has been outlined where hitting the play button will actually track the subject. However, on my system the play button does nothing and the area outlined to be tracked just sets idle the same frame which was present when I launched Mocha although the play head on the timeline visibly moves. Absolutely no movement whatsoever within the video.

I can do “still” masks and achieve the expected result but the subject tracking simply doesn’t work following every detail described in the tutorials.

I like the product and believe it does a stellar job for what it was intended; but only for those areas for which it actually works.

Any advice or assistance to achieve a more productive experience using Primatte Studio would be greatly appreciated. Are there any upcoming updates that may address some of the issues?

I’m relieved to hear that BMD were able to sort out the performance issue that you were seeing with Primatte.

The garbled text in the Primatte toolbar is a known issue and affects users of Resolve on Mac OS but is not apparent on any other host or platform.

I’ll provide you with step by step instructions for getting the most out of Primatte - it’s arguably the best keying tool in the industry for desktop video production and once you get the workflow down you can generate a solid key in short order and with relative ease from most source shots.

Could you please send along a screenshot of the Mocha UI where you have a mask shape that is not tracking? Mocha tracking should be working as expected in Continuum filters in Resolve so something odd is going on there.

Below is a screenshot. The track points were taken within context of another area of the video which would be difficult for me to exactly identify but the symptoms I described happened during the Mocha session and as you can see, it remains just as it was originally drawn. 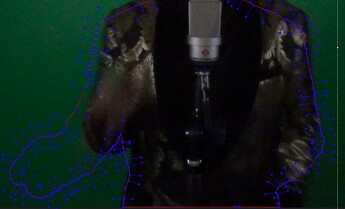 I’d also add that the Mocha session will crash within Fusion Studio as well, although I’d be more interested in having it work within Resolve at a minimum.

So you were trying to have Mocha track a single shape that covers the entire moving person in the shot. Ok, will depending on the frame size that could take a lot of processing power and it will require a lot of keyframing to adjust the shape over time.

There are other more efficient ways to use Mocha that would result in a more accurate result and less keyframing. Ideally you want to track smaller shapes to improve performance and for moving people, you should break the image up into separate parts as they all move along different planes.

I can’t see the movement in this shot, but I suggest creating a shape for each independently moving item on the person - that means a unique shape for each of the hands, the arms the torso and the head, at a minimum. I’ve attached a screenshot to better illustrate how I might approach tracking shapes that cover an animated human - independently tracked shapes for different parts of the body.

Why don’t you give that a shot and let me know how you make out. 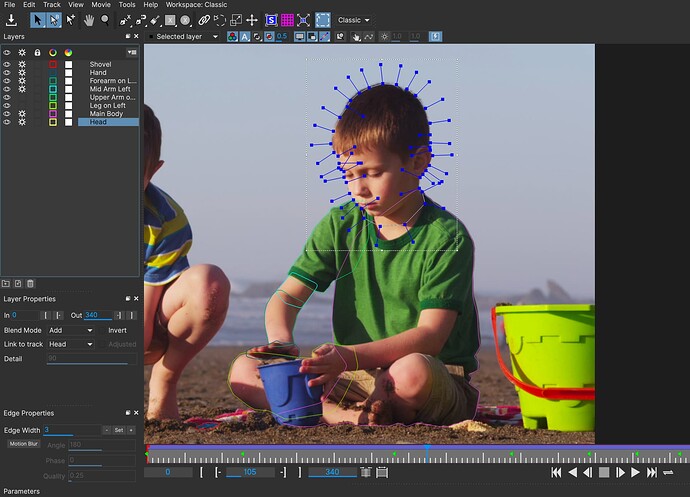