Problem with moving keyframes posted from Mocha AE into After Effects

Rotoscoped an object in Mocha AE and pasted the keyframes into After Effects (CC 2019) as masks. Some of the keyframes are off on a couple frames so I tried moving them in After Effects. While the keyframes can be moved, the image itself does not update. In other words, the part of the image that I am trying to roto out still remains even though the keyframes have been moved to cut that part out. My understanding is that I am supposed to be able to make adjustments after pasting the masks into AE. Is this correct?

Do you have “Apply matte” turned on in the plugin interface?

It was not on. I had applied the mask by clicking on Create AE Masks.
I just tried checking Apply matte as well. I tried moving some points on the mask but the image fails to update accordingly. Also, none of the other mask controls such as feathering or expansion have any effect. Before clicking Apply matte, these controls did have an effect on the image.

Btw what is the difference between using “Apply matte” and “Create AE Masks”?

Image attached. The points that I moved were on the outer edge and are now slightly inside the mask. 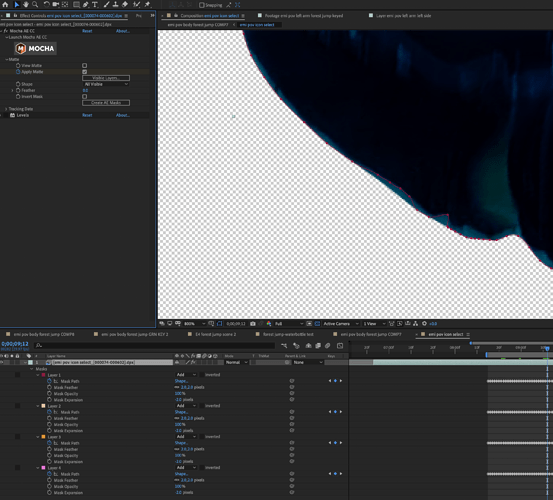 “Apply Mask” renders the matte directly from Mocha and applies it to the image as alpha. It’s slower, but it also means you don’t have to create the splines and get per-point feathering.

“Create AE Masks” creates the actual AE splines, which is faster for working in AE, but also means that you don’t get the per point feathering and need to re-update the masks for changes.

You generally don’t want both on at the same time. I was asking as if you had “apply Matte” on, your image would remain masked as it was previously.

i.e Leave it Apply Matte OFF if you’re going to use the Create Masks function.

But that doesn’t explain the residual image. Can you show a screen grab with Apply Matte OFF?

Thank you for clarifying. So after doing Create AE Masks, the splines are copied to AE but cannot be moved. However, as I noted previously, I am able to change the feathering and expansion.

Attaching an image of the same mask above with Apply Mask now turned off. Interestingly, the image reflects the changes made in the few splines I moved. I experimented some more and have found that after importing the mask into AE with Create AE Mask, if I then click the keyframe icon for Apply Matte AND the checkbox for Apply Matte and move some keyframes, then uncheck the box for Apply Matte, the updates are reflected in the image. 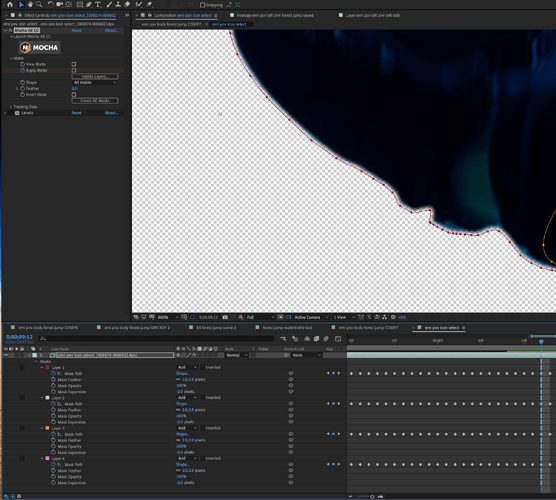