Removal with a animated replacement (Mocha Pro in AE)

Hi,
I was wondering if this was possible… (Fairly new at Mocha) I’m doing a shot that I need to remove small flags from the front of the building and replace it with one large flag across all the columns. (US stock exchange building) So here is what I was hoping to do. First create a clean plate taking out the little flags, and then animate a large flag on top of the clean plate and then use the animated clean plate to do the remove. However, I can’t seem to get it to move the clean plate and step through the animation at the same time. I can either get the animation to step though but not warp the images to the track, or I can get it to warp a single clean plate but not step through multiple images.

If you could help, that would be great!

I’d need to see the shot to tell you more, but that’s my best workflow based on your description.

Yeah, the large flag covers the upper columns and small flags below the columns. In my original set-up I had wrapped shadows around the columns and on the edge closest to the camera and animated the shadow to move with the edges and since I had already done that work I thought I could do the entire replace and insert in one shot.

I’m somewhat a new at this but I general get the idea of all, it’s knowing some other small thing like switch and such that I’m not sure if I’m missing something. I tried to do this shot several times however it’s close but probably did twice the amount of work than I should have.

Attached is a screen shot. 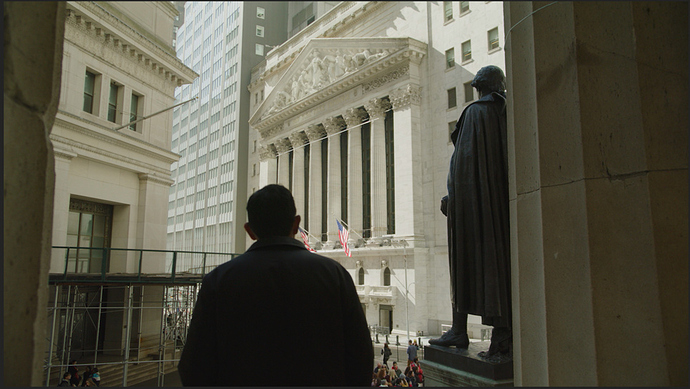 Set-up: Camera follows the guy who walking into the shot from behind camera between the columns and pauses and walks down the stair a bit towards the left and out of the shot. The camera dolly move is pretty slow and never passes the column on the right. Total shot time is 10 seconds.

The Columns on the front of the stock exchange need to have a large Soviet flag and the small flags need to be gone. Also the statue of George Washington on got right needs to be replaced with a statue of Marx.

So knowing your approach on this would be great.

Here’s what I did:
In a nut shell, I first tracked the guy - so he was a holdout for the building track. However I think I over did my keyframes on the guy, The track kept drifting… maybe I have a setting that could have been different -I had 23 keys in 69 frames.

I did a track for the building front plane, and I created a second smaller layer inside the column area for the remove. I attach that remove layer to the building track.

Form my 3D model to be placed on the right I tried to do an AE camera track but I think it had an issue with trying to track the camera move, plus the guy walking and going into the distance and then the camera catching up to him when he paused… could not get a good camera track. I was thinking about doing a clean plate for him, take him out of the shot so I then could do the camera track. I did try just doing a still render of the 3D statue of and just track the position - since its a small move. I also cut out the column on the right froze it a stilll and just used the same track to move it and scale it manually. The result was ok, but not sure if my approach was just not right.

Most of your videos make things like this very easy, but my shots never seem to go as smooth and feel its a bit arduous.

Thanks for any insight.

That’s really odd, I feel like a camera tracker should be able to get this shot right. Is there a lot of motion blur I am not seeing?

For the holdout roto, I’d make it very loose, just a loose shape around his head and then one around his body, probably only using translation, scale, and rotation only. I’d then probably try to get away with luma keying him out if he’s that dark for the whole shot, using the garbage roto matte and levels, and just paying attention to the column shadows where they would go behind his head. If that didn’t work, I’d opt for fully articulated roto, which might defintiely be a lot of keyframes.

If you want to do a camera solve on this for a 3d object, I’d try slapping some textures onto planes in the shot using Mocha and re-run it through a camera tracker if it was having trouble tracking in the first place. You could also use Mocha’s 3D camera solver for this shot if you always have at least two non-coplanar planes visible throughout the shot and can track where you want to put your flag object.

If you have a lot of occlusions and parralax in your camera movement, this isn’t an easy shot. Anyway, that’s what my aproach would be, in theory, without seeing it in motion.