Hi, I’m new here and to Mocha Pro. I have a drone shot that I was testing with and was trying to remove the cars and ideally the truck from the bridge. I shot this with my drone and everyone is free to download it and use it. I would love to see a tutorial on how to remove the cars and truck. Feel free use and post anyway you see fit. I’m more of a camera guy and really just dabble in this stuff. Also you can request footage of any kind and I will try to get it to the community. I have a Red Weapon 8k, both sperical and master anamorphic lenses and inspire drone. I can get steady cam/ gimbal or hand held footage.

Anyway suggestions on how to best apporach this shot would be awesome!

here is a drobbox link to the file

I’d probably do this in several pieces. I’d do a normal remove with three BG tracks, one for the surface of the road, one for the guard rail, and one for the side of the back bridge. Then I would probably do a patch for the ground using the insert or a corner pin underneath the bridge and roto my remove back over the top.

If I can use this for a demo, it might make a really interesting one.

You can totally this footage for a demo. That would be awesome really! I have the 4k source footage if you need it at a higher rez. I also would like to see your approach on the wire remove of the giant power cables. Just let me know what you need from me!

Hi, can you share the footage so that we can make an attempt too on what has to be done?

hi Sorry I thought I put a dropbox link to the file. You are unable to download it ?

follow the link are use the download button. Drop box is displaying a low rez version in the browser. The linked file is 1080p scaled down from a 4k source.

Let me know if you have any questions are problems

Yes I found it, thank you… I believe the previous link contained a .jpg file instead… No issues now thanks again… Will get back…

I am downloading this now.

Hopefully I can do a more in depth tutorial on it soon.

sounds good! I cant wait to see what you come up with

Yeah, if it works out I will post it! If not, can you email me and we will just go over the file. (mary p at boris fx dot com)

Hi Mary, any update on the shot?? Were you able to get the removal of the vehicles in that shot?? If so, please post it so we can get to learn from the output. If there’s a demo it would be really appreciated…

I was out of the office for two weeks for a personal matter, I am back now and working on this today.

Yikes Mary. That was a LOT of info in less than 5 mins. Might there be a less “caffinated” version of this process?

For removes? Yes, there’s a three part breakdown on the process. But this is an advanced tutorial that assumes you know how to do a simple remove already.

No, I’ve saved & watched those. I’ll go through the drone video again & makes some notes so I can ask some specifics; mostly on working with multiple items I guess. For example, you did a couple things with exporting shapes, etc. that I’d never seen let alone used before.

I finally found one aspect of the tutorial that’s throwing me off. I’m using the Standalone version & using MochaImport+. When you get to the step back in AE where you duplicate the layer and add another copy of MochaPro (as you’re using the plug-in version), I get a warning window: 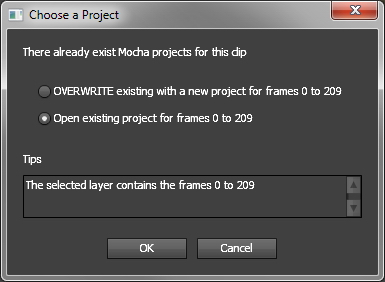 How do I handle this w/o messing up the exisitng cache as those are tied to the clip file itself rather than the layer name? That make sense?

None of my tutorials linked above use MochaImport+

You’d have to refer to the guide for MochaImport+ for what to do in this case. I imagine you’d want to use the more recent file.

OK. I’ll drop Mathias a note and point him here then.

The “Track in mocha” button of MochaImport+ is just a convenient way to open existing or create new mocha projects. You don’t have to use it to create/open your projects when using MochaImport+ (with the extra bonus of being able to send masks from Ae to mocha). You can still open and create mocha projects directly in mocha Pro and then import the tracking data from those projects with MochaImport+. So when you need more than one mocha Project for the same frame range of the same clip, I recommend to create the second one manually. AS you suggest, you could also let MochaImport+ open the existing project, then save it with a new name.