Remove module not rendering in Adobe ae or premiere

I just bought a drone and trying to find suitable software to make a clean plate easily. So i’m a bit of a noob in VR footage but quite proficient in Adobe. I’ve been trying and trying work out how to make the remove module work in premiere and AE with little progress.

I’ve had it work a few time on AE but it’s been glitchy and now I can’t get it to work at all.

I’ve cleared caches in both Mocha plugin and ae + Premiere

I’m creating a clean plate and importing that. When I render frame in mocaa, it works and covers the drone that I’m wanting to remove. I swear I’ve played with all the settings but hoping that my feverishness to make it work has meant I’m missing something simple? When saving and closing the app. I have remove module selected and render ticked. That’s all I change apart from originally selecting mono 360

Below is both views and setting of the remove.

When I select render in either premiere or AE you can see the propeller heads of the drone move slightly, so there seems to be an issue with it ready the data correctly from the plugin 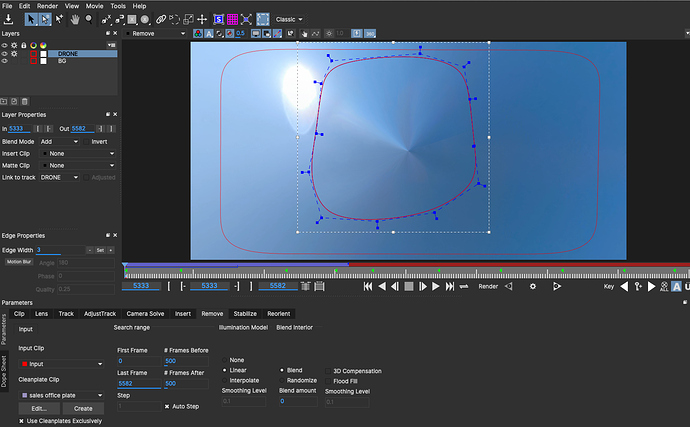 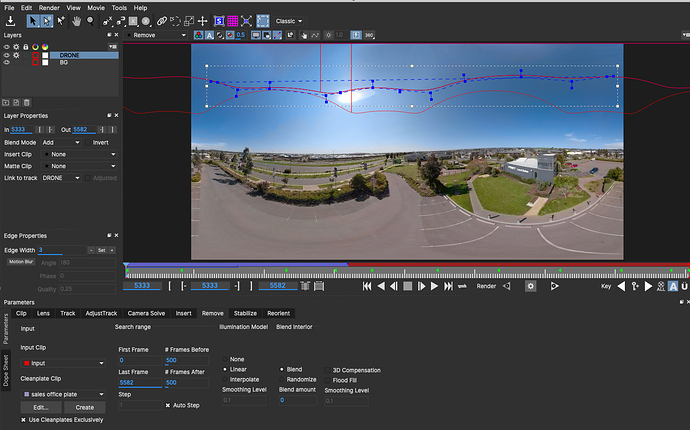 Given how clear the sky is, my first guess would be that the background track is going to be slipping.

When you turn on the surface and grid for the BG track, does it follow the movement of the sky clearly?

Thank you for the feedback. Good point it does seem to be slipping and a bit wobbly. Should I track with small motion instead?

So if the track is slipping, will it simply not replace the drone at all? When I render one frame inside mocha, it replaces the drone with the clean plate.

Any other suggestion or links to methods would be greatly appreciated.

Mocha will remove all frames based on the tracking information it has.
You may need to change your “first frame” value to the project range. Is the entire BG layer tracked?

Is the drone travelling, or remaining in one place?

In this particular case, since you’re using AE or premiere, i’d actually recommend you use the lens-patch method:

So the drone is traveling.

What i don’t get is that in Mocha when I render the frame it works. The drone is replaced by the clean plate.

But when I click render and select the remove module nothing happens?

To make sure I was doing the right thing I did another test and was able to successfully able to remove an a person from the shot. I then did clean plate and made it blue dot and used that excessively. That showed on premiere. But there were some frames that didn’t.

So then I noticed I could show mattes on premiere. I was able to see the bg track matte for the working shot but there is no matte on the drone removal shot.

So i wonder what is causing the data to not come through?

Thanks for sharing the other tutorial, I’ll try this for a workaround but prefer to find out what I’m doing wrong here. As I say it renders in mocha and I have the other shot working.

Will search here now to see if I can find anything.

One tip for anyone is make sure the fps is the same as the source footage. That was one thing I had wrong which was causing the matte to miss align on the shot I did successfully.

I’ve had the same problem in ae.
The remove works fine in Mocha… but when using the remove module in ae… nothing happens…
This is an intermittent problem.

I also have Mocha standalone so my work around has been to render out the remove.

Try doing a test render in the Mocha Pro program, saving a closing Mocha, then in the Mocha interface in AE using the “render” checkbox and the dropdown menu to select remove. Make sure you have caps lock off.

Let me know if that works for you?

Same is happening to me in Davinci Did never happened before but I have installed v 7.04 so I am rolling back to 7.02 and see if this solves the issue

Unfortunately, we still don’t fully support Davinci Resolve because of the way they handle rendering plugins like us right now. But we are working on a solution with them.

Yes rolling back solved the issue. The remove module works great again and plates are being used as it is supposed to.