first of all thank you for creating Mocha. It has become my favorite tool to use in my arsenal because of its features, stability and that it just works.

I’m working in the latest Mocha Pro on quite a tricky shot and I just wanted to know what the right way is to approach it.

I have a shot of a ball slightly being thrown up and caught again. It has some text on it which should be removed.
So the ball warps, the light changes and we have motion blur, but also a sharp frame which I did the retouch on.

In my ideal world, I track it with the Powermesh, paint a cleanplate, put that in and Mocha figures out the warping, motion blur and light-changes.

But I found that it doesnt work like this. Basically all approaches had one catch.

So because I was on a tight deadline, I just tracked the cleanplate on top, turned on motion blur on the layer in AE and imitated the light-changes with adjustment-layers and masks, but it looks far from perfect.

I just think, there is a better way because of all those amazing features that Mocha offers.

Just to give you an Idea, here is a screenshot of the base for the cleanplate I took. 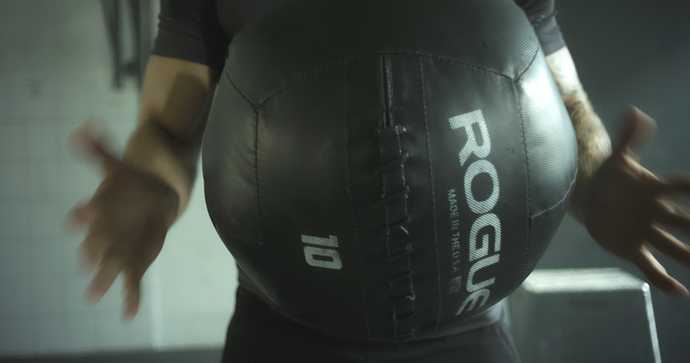 How would you guys approach this?

PowerMesh is in it’s infancy and obviously there are some things we’d like to include in it’s use, but remove and insert are not currently possible with PowerMesh right now. That means no motion blur, no lighting changes, and no inserts yet.

HOWEVER this is exactly the kind of Frankenstein nonsense I love to kludge together SO let’s try some experiments. Step one I would do, having not done a shot like this yet, is PowerMesh track that bad boy and nail that motion down in the stabilize module. Next, I’d try precomping that with all the attributes into the new comp or rendering it for speed, slap a single frame cleanplate remove in the stabilized part for your lighting changes with Mocha, and then re-warp using the PowerMesh data from your stabilize. Render or precomp, you might have to render because of how I have seen plugins behave with forced motion blur, and apply a forced motion blur. You can use the BCC motion blur which uses optical flow tech and is very nice, or there’s some forced motion blur effects (like CC force motion blur or a simple directional blur) built into AE. You can use a Mocha mask to isolate the blur effect with feathering.

So while that’s not an ideal workflow and is a few steps, it’s how I’d approach it.

You could also use the remove and apply your own blur. Personally, as I have discussed with @MartinB before, our whole team would love to see motion blur in the remove module and illumination modeling in the insert module, and PowerMesh in both, but we have to see how the development shakes out in the time allotted with current resources, such is the path of software building.

You could ALSO simple stabilize this and do something like a Silhouette or After Effects clone paint on the ball to grab lighting and blur from the ball itself but that would also present it’s own challenges. Then simply rewarp with the PowerMesh.

That’s what tests I’d start with and it would definitely take a hot minute to do.

first of all thank you very much for taking thinking this through. Sorry I never answered but I got caught up with other jobs and then Christmas and NYE.

Out of curiosity I just tried this approach, which isn’t too far from mine but it also works well this way. Still a bit of fiddling with the blur and the lighting adjustments but a very decent result!

Thanks for your help on almost every question there is in this board. You’re doing a great job.
And fingers crossed that the guys from development & programming find a way to combine all these tools soon!

Happy to help! And I’m glad you ended up with good results.