I was trying to remove several people in a shot, but they overlap at some point - which leads to unperfect removes. I was able to find the tip that I could export shapes and reimport them into one layer but I could not find the option in Mocha Pro how to import the alpha sequence (using Mocha Pro inside of Silhouette) to create that one shape.

So a) where do I find that option
or b) how can I set Mocha Pro up that it just renders the remove correctly when shapes overlap?

Thanks for your help

Hi, I’m just curious, can you share ‘tip that I could export shapes and reimport them into one layer’ ?

In Mocha you can tell it which frames to choose from for the remove if unwanted objects get in the way.

In Silhouette there’s 3 little dots top right that allow Create a Roto Node, you could then put all shapes in the same Layer 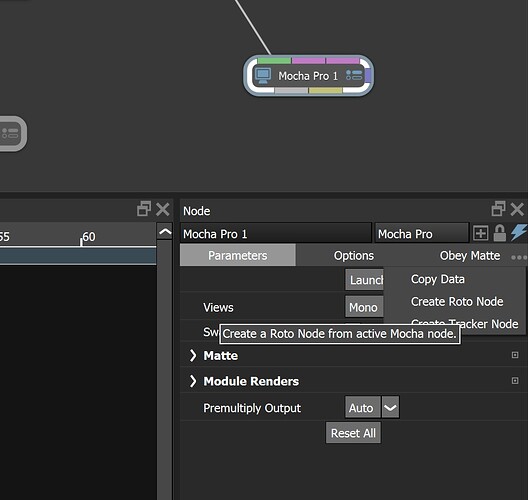 Mary wrote about the reimport that some time ago:

If they’re on the same layer, that is expected behavior. Shapes on the same layer add where they don’t overlap and subtract where they do. In the future, roto them on separate layers and then you can render them as a matte and load that onto one layer for a remove. We are working on a solution where we can group several layers into one group for removal, but we don’t have that feature worked out yet.

I’ll try your solution for converting to roto shape in Silhouette, see if that gets me where I want to be. Thanks

In general, you want to do this in passes, rendering the first pass to disk, complete with artifacts, then operating the second pass over the first render to clean up the rest.

In this episode of Office Hours, I talk about this exact scenario (excuse the terrible lag, we were having some streaming problems that day!)

Yeah, at the end that is how I managed it. Two separate runs and done.
Technically, if one could specify the output-render layer of one remove as well as putting that into the input of the other render layer, it might work inside of Mocha Pro - but that functionality isn’t there (yet?). So we’ll see what you guys will come up with

This is technically possible in the Standalone version, as you can set up separate render outputs and feed those outputs into the next pass, but it’s a lot easier to just render the set and work on the next pass to avoid confusion.