I have FG and BG tracked with several splines.

The issue is when I’m selecting FG splines and trying to use remove module, it doesn’t work for intersecting areas.

Here is an image to illustrate: 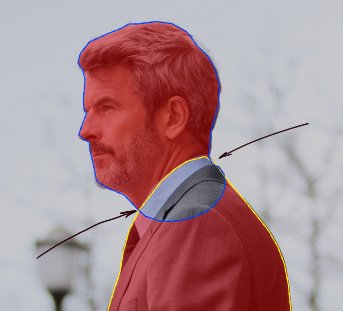 I have tried to keep FG in “substract” or “add” modes, doesn’t help.

Is that possible to remove object tracked with multiple splines at all?

Firstly, your roto is way too tight on your guy for a remove. When you try your remove you’re going to end up leaving his edges and hair on the BG and mocha will stutter that information across the screen. You can save that roto for adding him back into the shot selectively, but you’ll want to duplicate the layers and use uber key to pull the points out further.

Now, the fix to the overlap issue is going to be your “join layers tool,” which looks like a chain in V4 and in V3 looks like an extreme closeup of a chain.

Make sure your bakground track is rock solid and you should be good to go. Please let me know if you have any questions and I will be happy to help.

Martin has shown this in his latest product video:

Although it raises a question: WHEN did he join the layers? I take it, he tracked both BG parts, THEN moved the shapes into final position and thereby joined them? Or did he actually join them BEFORE he tracked the BG?

I was also wondering if it would be mathematically possible for Mocha to create a roto from the person out of the pixel difference between the original shot and the now new clean background plate?!? I tried this once with a difference matte for a clip where a background plate was created by mocha with this method Martin shows here, but there are limits to that kind of alpha matte creation on pixel difference - however, mocha must have additional data to possibly create such a matte “with ease”, does it not?

It doesn’t matter when you join the layers, just so long as they’re joined before you render, it just matters if the BG tracks are rock solid with removes.

For the difference matte, mocha’s results are similarly unusable. We used to have this “feature” in mokey, but it did not give desirable results. You will get better results with a soft blend using the remove spline to combine the new plate with the original plate in a compositing program.

Does that make better sense to you?

I’m coming to the conclusion that the shapes used for the remove tool should be rather loose, but also using as few shapes as possible.

I’m having a similar issue as the original post. I’m doing a fg roto of a women and I’m creating simple shapes for the head, neck, arms etc.

I group up my shapes for the fg women, and in while in the remove module I have the gear turned on for all shapes in the layer menu to be removed. It works, but if any shapes overlap, it subtracts from the matte it’s overlapping and there is no removal in that area. I looked into the join shapes tool, but that seems for corners on walls and floors and such. The shapes points attach to one another. This seems for an entirely different situation.

So really, you need to do one shape, or multiple shapes and render in passes correct? Seems a bit odd.

I’m also noticing that when you have multiple shapes in one later, they also subtract at the intersection and it doesn’t seem to be any way to change that behavior.

I’ve come to the conclusion that all shapes should get their own layer when doing shapes for roto. You can add shapes to a layer for simple garbage mask type situations where shapes don’t typically overlap or you can join the edges of simple shapes. Would you say that is correct as well?

Thanks for your time

As few shapes as possible and loose are indeed the best way to remove objects, both for speed and so you do not leave edge pixels on the background. The intersection of shapes on one layer is intentional, and a feature meant to cut out shapes, not a bug. If you want to overlap shapes, make them either a a larger shape or a shape on another layer linked to a track.

If you have any more questions I am happy to help you.

Thanks for the info Mary. In flame I tend to use multiple shapes even if it is loose and is being used for holdout/garbage. But now that I know how mocha likes things, I’ll stick with making one shape if possible. Would be cool if every shape layer in a folder would be considered one matte to use as a removal, but I’m sure there is a reason it’s not like this.

That is a feature request we know about, grouping a folder to be seen as one shape. It’s on our list!

Excellent, thanks for your help Mary

Has there been any movement on this feature request? I made a bunch of fairly detailed shapes for foreground objects that I wanted to exclude from a clean plate, and now I want to use some of them to remove those objects over the course of the clip - but am running into this same problem due to shape intersections. I’d love it if I could select a few shapes and set them to be a union with other shapes.

Not yet, but we can poke @martinb about it and see if it’s in the works.

Overlaid track mattes are still going to be excluded separately, but we are looking into combining layers as a group.