when i install bcc or spahhire 2019, i need first to uninstall the older versions.
(dont know if update is possible with my license, but i have annual subscription.)
does the installer will u ninstall previous versions when i click ok?
im afraid that when older versions get uninstalled, that everything in my old projects gets lost

when i install bcc or spahhire 2019, i need first to uninstall the older versions.
(dont know if update is possible with my license, but i have annual subscription.)
does the installer will u ninstall previous versions when i click ok?
im afraid that when older versions get uninstalled, that everything in my old projects gets lost

For future reference, it would be best to create new forum topics for separate issues like this to make it easier for others to find answers to similar questions down the road. But to answer your question, projects created in older versions of Continuum (or Sapphire) should open fine in Continuum 2019. The older version will be uninstalled when you install a newer version of Continuum, but the effects will link up automatically. We work hard to maintain compatibility for old projects opened in newer versions like that. In some cases we will have fixed a bug along the way which may change the older look somewhat, but the overall project should still remain intact. However, note that we do NOT support going the other way. A project created or resaved with Continuum 2019 is NOT guaranteed to open in older versions of Continuum.

What version of Title Studio are you using?

thanks so much, just wanted to make sure, that nothing gets lost
i used 11.020 but will try the same now with 2019 (with the missing front color).

EDIT: i installed the 2019 versions and after that i get an low level exception in my older projects, the preview of the pictures gets black and the program crashes. 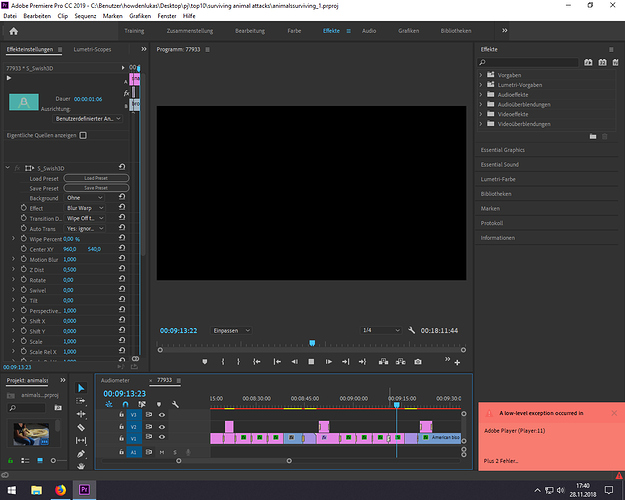 right after that the weirdest thing ever happened, the project file got deleted Oo (no joke)
thankfully i have made a backup before installing the 2019 versions

hmmm weird, the file is back again. Oo
before that i tried to move some files from my firefox dow nload folder to a project folder and it was copying them instead of moving them
i get an error message 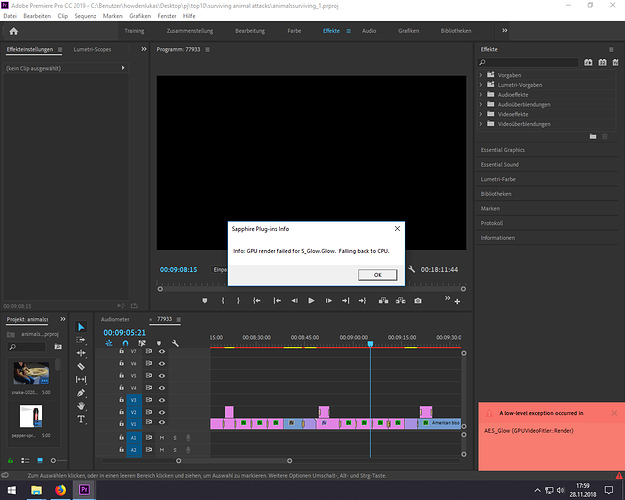 pictures are black or half black Oo

there stand GPU Video Fitler (instead of Filter^^)

when i installed sapphire (opened the .exe) there where no wi ndow showing up and in the taskbar there were just a task without an image shown, i clicked right click on close and shortly after that message if i want to close installation were shown i clicked no and then installed.
installation went normal.
i dont think that it can come from that
just slower loading the .exe file i think

EDIT:
opened another old porject and everything was working normal, then again the error and program crashes Oo
so i cant use premiere anymore 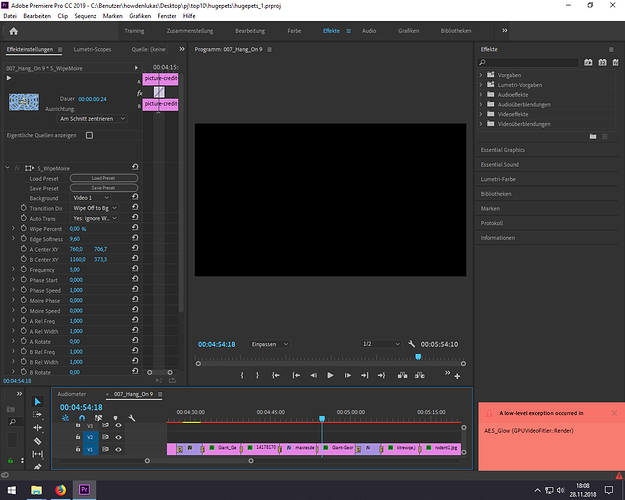 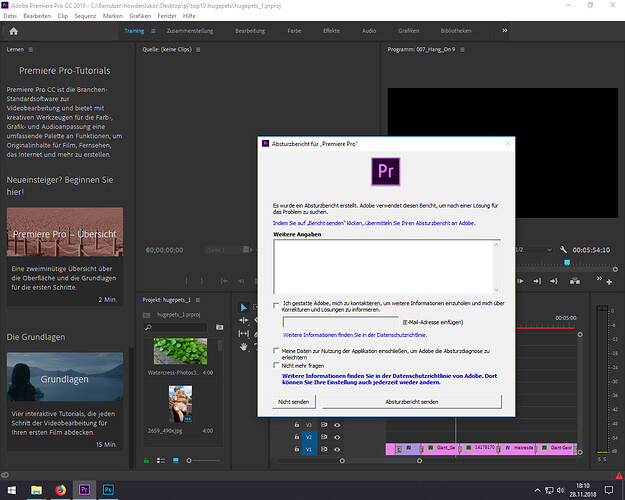 Can you send us a copy of the project file (without media)? You can send it off list to jclement at borisfx dot com. Also, when updating was it just Sapphire that you updated or was it both Sapphire and Continuum? Doing them one at a time might help clarify which is the culprit. You can uninstall the newer versions and go back to the older versions one at a time. (When going backwards, be sure to uninstall first.) Based on your screenshots the errors look specific to Sapphire so it would be good to create a new thread on the Sapphire forum regarding the issue if you can confirm that.

hey,
no problem buddy (i can just copy everything in new threads) and put the links here
i installed both, first saphhire and after that continuum, after that opened projects.
i have the same problem in every project.
something with glow (which i use quite often) ^^

sent you the file to your email

tried to install saphhire again (2019) without uninstalling (2019).
but same error.
Can i try to to unintsall 2019 and then install 2019 or will data of old projects then be deleted?

EDIT: tried to do it and worked, but still error message

no 11 version on Boris FX | Downloads

Thanks. We received the project file and will check it out.

You can download the V11 versions of Sapphire and Continuum here:

Before installing the older versions you should manually uninstall the new versions. Your projects should not be deleted when uninstalling. But note that if you SAVED any projects with Sapphire 2019 or Continuum 2019 then those newly saved projects may not open in V11. It’s good to make backups before doing experiments like this.

We have not been able to reproduce the problem using your project file. It may be related to specific media, or perhaps to certain graphics cards / host versions / etc. You might want to contact the Support team directly to work with them on next steps:

Open a case to get support for all Boris FX products. You may also view the FAQ section or call us at 1-888-77-BORIS.

They can help you isolate just which part of the software is causing the problem.