The hang is variable and random upon each encode operation; Sometimes 0%, sometimes 42%, sometimes 92%. Often hangs at 0% prior to utilizing any CPU forcing me to forcefully close and restart the program. In Ppro, If I cancel the hung encode and start it again without closing / rebooting premiere entirely; it hangs at 0%. Apparently at a similar state as it was during the initial encode. The program often hangs while moving around the timeline as well (says program is not responsive). It may or may not unhang after a minutes or hours; I don’t have time to wait around because this happens every 5 minutes or so.

I have deleted cache files. I have disabled all overclocking on my system. I have updated all adobe products and sapphire & drivers, to the latest, disabled GPU encoding in Sapphire.

I saw an error on the bottom right, exception occurred with plugin: S_glow; At this point, closing Premiere doesn’t close premiere entirely; I must force close it and its associated programs via task manager. 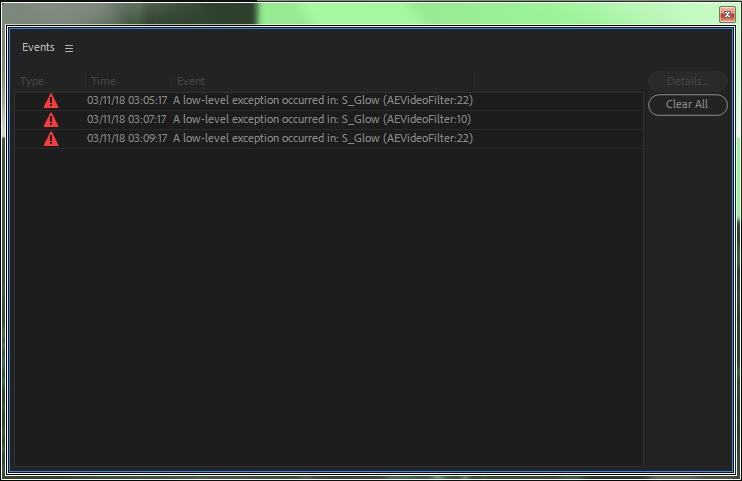 Many users were having issues with Sapphire’s GPU encoding enabled; So I tested to see if disabling sapphires GPU utilization would result in a successful encode.

Optional: If disabling GPU in Sapphire works for you, you can enable GPU for faster albeit somewhat buggy timeline editing & previews, and disable for final encode.

Using Windows 7; Anyone have any clue what is going on here?

The only seeming work around is to reduce export resolution from project sequence default of 1920 down to 1280, while disabling max render quality and max bit depth; these enabled result in hanging. The app does not crash or stop functioning, it just stops encoding.

This has just happened on the windows 10 machine I had just transferred to; It got to 42%, the first pass, and has sat there for an hour and a half doing nothing.

Primary machine is a custom desktop PC Windows 7 64 SP1; Using a different computer (dell laptop) with Windows 10 with the same project imported results in the same activity; using sapphire 11.0.1, Ppro 12.0.1; using VBR, typically hangs near the beginning of the second pass; with Maximum Bit Depth enabled, it got to second pass, 82% and sits there.

Thanks for the detailed explanation. Something definitely funky is going with your setup and this is a situation best handled by our support team. You can go to Boris FX | Support and fill out a ticket and they will get back to you.

They have already contacted me through email. Thank you so much for your input! Interestingly; the encode began resuming on the laptop after pausing the encode; unplugging the HDD the project was located; plugging it back in and resuming the encode; This resulted in a few seconds of encoding to complete. Then appeared to hang. So tried it again, and this time I had also forced closed “Adobe After Effects” in the task manager soon after plugging the hard drive back in, and prior to its resumption. Then the project ran until it reached 74% or so then hung again…

After 30 minutes the encoding resumed on the aforementioned transition for 3-4 frames then hung again.

Often restarting the encoding of a project it hangs randomly on variable points, its not always the same, therefore if possible (in adobe and other programs), a very simple work around for BorisFX would be an option to restart the encoding of a particular transition or clip segment if it hangs or encounters an error;

Output preview on the Laptop how shows one large red background; only a tiny segment of the video footage is visible. 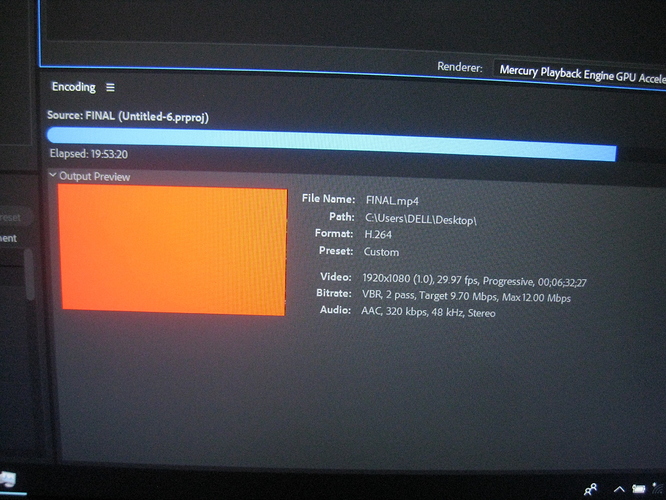 Output preview on the Laptop how shows one large red background; only a tiny segment of the video footage is visible.

This appears to have continued with following frames; now only visible on the right; starting then, hanging 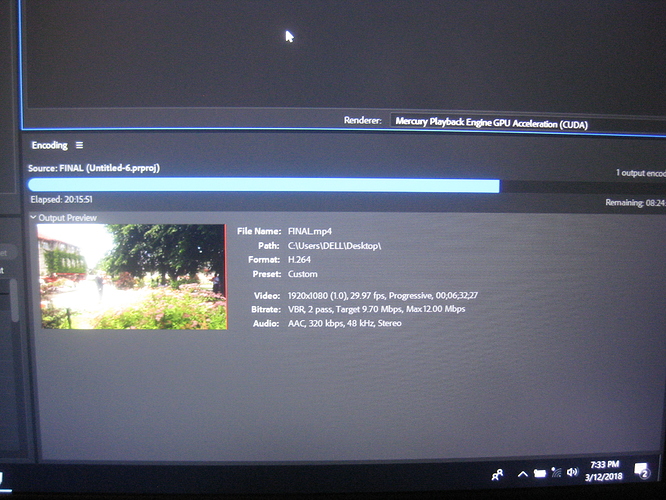 So I gave a copy of my project to BorisFX for them to debug, and the result was the following, quote:

I was able to render out the clip fine using my computer. I had to install AE_ADBE FC Pro 2.1 plugins. I also had to remove the Final.mp4 clip at the beginning of the project since I was missing that media.

What I did notice during the render was that my memory usage was pretty high. My system memory was going up to 14GB out of 16 GB and GPU usage was 2.5 GPU out of 8GB.

What Sapphire does is that it uses the GPU to speed up render while it still have enough GPU memory and if it runs out then it will switches over to CPU. This memory is shared between Sapphire, Premiere, your PC, and any other filters you’re using. In your case I believe that all your GPU memory is used up which is indicated by your logs. This causes Sapphire to switch over to CPU memory. However if you’re running out of your system memory as well then you’ll experience slowdown.

A few things you can do is upgrade your GPU. I know that graphics card can be costly so another route you can also try is by upgrading your system memory. As I recalled you’re running with 8GB. If you upgrade it to 16GB then it might help with the rendering. Another option would be to just pre-comp or render out the various sections of your project so it would speed up with the whole rendering process in your final project.

So when sapphire runs low on GPU memory it results in “S_Glow” low level exception errors? So minimum requirements for sapphire is 16 gb ram, and what, 4+ gb video memory? I don’t mind having slow downs, but my issue is I am running into errors that cause corruption and a failing project; Rather than the end user being forced to pay thousands of dollars for the program, then for upgrades, it would be much better Boris tweaked Sapphire to work properly, and fixed these bugs. Are disabling GPU use in sapphire resulted in the same bugs. Are there any other commands I can use to avoid these bugs?

Please fix these bugs for your customers.

As Brian said earlier, there’s something weird going on here. This isn’t something that has been reported to us before, and we haven’t yet been able to reproduce the errors.

We’re still investigating and probably have more questions for you, but this is something that we’ll need to handle through our support team (Boris FX | Support). It sounds like you’ve already been in contact with them, and we’ll pass anything we find back through them to you.

Thanks guys, excellent support here; I’ve been in contact with linh. You may be able to reproduce this david, if you remove 120 gigs of that ram and downgrade your video card to a nvidia 660. The error occurs when Sapphire runs out of memory; tough happens with gpu encoding enabled or disabled.

The only work around I found was the following: pre-compose, create copy of the original sequence or just drag and drop the sequence onto an empty timeline; this results in a nested sequence of the original; chop it up into manageable sizes (may not be absolutely necessary); encode using cineform: yuv 10-bpc, at a quality of 3. This is what I used but rgba 12-bcp + alpha may work also at a higher quality setting. This resulted in a high quality precomp with zero errors, which I successfully re-encoded later as h265 and h264

This is officially fixed in Sapphire 2019, it is now tighter and more stable than ever; right on top of it, absolutely incredible work guys! Great customer support! THANK YOU!