A couple suggesions for future features…

@sam.marrocco For the Paint size, we purposely left the amount at 250. Setting too high of a maximum brush size ruins the precision of adjusting the slider. Since you can use the Ctrl-drag in the Viewer to set the size of the brush, and this is what is done the majority of the time, we though this was sufficient.

There are a number of enhancement we would like to add to Paint, including some of the suggestions you have made.

Scaling of the source thumbnails would be a welcome change.

Thanks for your input.

Understood, thanks. I’d not noticed the CTRL-drag in the viewer so that works as an alternative. Yes, without a very wide slider control it does impede on detailed adjustments.

Hi Sam and Marco,
Can I also add a suggestion. When doing dustbusting, I find that having a third source would be super handy. Currently I use sources 1 & 2 in dual mode most of the time, but when there’s a lot of motion, I have to turn off dual and then adjust source #1 to same frame then apply an offset.

If there were a third source that is never affected by the dual setting, a standalone source (if you will), then I could just hit a shortcut to the #3 source, or maybe a “same frame source override” and and away we go!

Are you using the plug-in or Standalone? The plug-in does only has two inputs in the host, but once in the Silhouette interface, you should see 5 optional purple inputs at the top of the node.

Maybe I’m using the wrong terminology. I’m referring to the source frames in the settings window, not the overall source input. 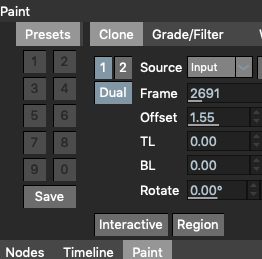 OK, I see what you are trying to do now. You can do this with Paint presets. Save the Dual Clone setup as a preset and then another preset that doesn’t use Dual Clone, use a different input if you like and change the frame. You can then switch between the presets.

I don’t see a shortcut for selecting presets in the manual.

Once created, you can use the Alt-0 through Alt-9 keyboard shortcuts to
quickly select one of the presets.