Some (not all) BCC plugins crash OFX Host VEGAS Pro 18

Freshly (re, re, re-) installed BCC, v2021.5 OFX version. Host is VEGAS Pro 18. Some (not all) BCC plugins cause the Host to crash. For those that cause the crashes–for example, Type On Text–the behavior is consistently repeatable, not intermittent.
Has anyone else experienced this, and are there any workarounds or fixes?

I’ve created a support ticket for you as I’ll need you to send us some log files.

There may be some more, but those have the common trait of being in the subset, “BCC 3D Objects.” Two of the “BCC 3D Objects” don’t crash the program:
BCC Layer Deformer
BCC Title Studio

Troubleshooting has included resetting the installation of the host, VEGAS Pro 18, which will cost much time to recover from… The problems with BCC were unchanged by resetting the host.

Can you reply to the ticket with the BCC.log file attached? It can be found here:

"Can you reply to the ticket with the BCC.log file attached? It can be found here:

Yes, Sir. I did send that log, along with the host Error Report, and did the other troubleshooting step you recommended (moving the BCC preferences).
I hope you got that information.

Similar problem since upgrading to Continuum 2021.5 using Standalone Silhouette. Previous version is fine but with .5 release nearly every time I click on a BCC Type on Text node it uncontrollably crashes.

We identified a problem affecting the 3D Objects category of filters (except Title Studio) in OFX hosts that was introduced just prior to the release. We will fix this in a maintenance release as soon possible - hopefully as early as next week. In the meantime the only workarounds we are aware of would be to avoid the filters in the 3D Objects group other than Title Studio or to temporarily revert to Continuum 2021. Sorry for the inconvenience and confusion!

Ok - thanks. We will recheck this as as work on a fix.

Update for Jason, RE: Title Studio

That could be anomalous, or it could represent a viable workaround. My testing is limited. Thank you for looking into this.

Hi, I was curious about this as i use Title Studio, i don’t know if this has been fixed but I normally apply Title Studio to an Empty Event on a separate track, so i did just that & i tried applying Title Studio as a dragged in fx from the Video FX window, from the Event FX button on the track header, as a composite from the Track FX button, they all worked fine but when i right clicked & try adding Title Studio from the Media FX pop up window it doesn’t do anything on an empty event,
So i added two identical pics onto the timeline one above the other, I added Title Studio from the Media FX pop up window on to the top track pic, it loads ok but if i alter the text from Boris FX i get the little blue circle thinking symbol when i Apply back into Vegas, if i leave the blue circle & screen alone it does load the text i write but takes a couple of minutes to do that, if i click on the screen/Vegas while the little blue circle is doing it’s thing i get the familiar ‘Vegas has stopped working’ white box.
Restarted Vegas hoping it’ll clear temp files etc, now if i drag Title Studio from the Video FX window onto a pic it makes the pic go black & the pic below with no fx on it black too, restarted Vegas, dragged Title Studio from the Video FX window onto a pic to repeat the error but this time no text on the screen, just the pic below shows , if i mute that lower track, the screen is black on the pic/track above that Title Studio is on,
Going back to using an Empty Event to load Title Studio & Type on Text on to, everything works fine, I hope you get whatever this is fixed but i’ll be sticking with using an Empty Event as the base for Title Studio.

I can’t get Extruded Spline to let me load the source layer on
not sure if I’ve got the setting right as it’s been a while but tried a few combinations as i remember it. 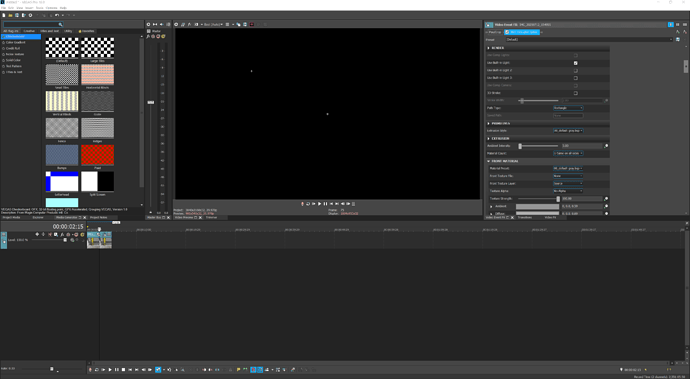 Doh, it works if i load it as a Track FX 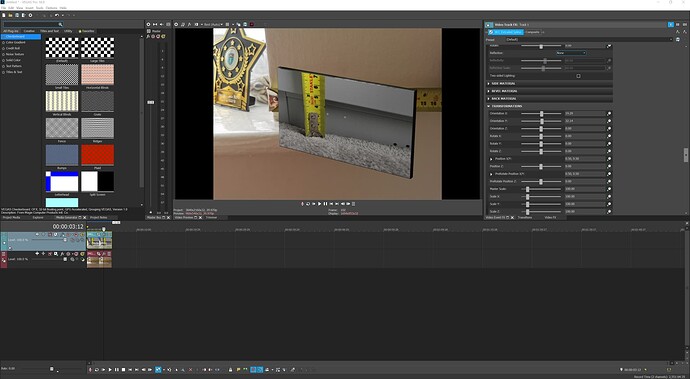 Just to chip in … I was using Title Studio (2021.5) today in Vegas Pro 18 (b482) at the event level by adding it to a black solid color media generator event on its own track just for titling - no problems whatsoever.

Yep same here, works fine on black just like on an empty event & on orange with composite set to normal the orange shows but put it on a picture & it just goes black, put a green image on the lower track & it shows there’s nothing in the top pic
What happens if you add it to a Jpeg image of something? 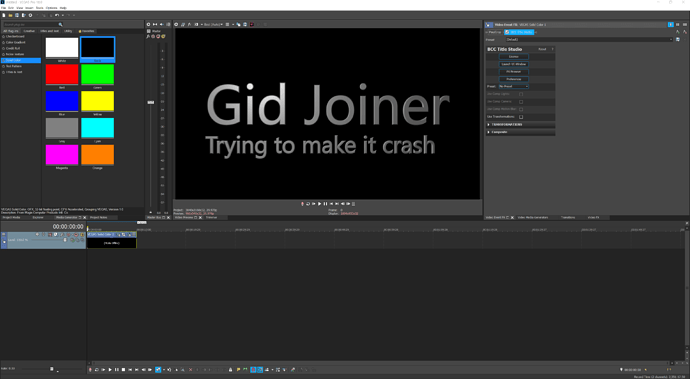 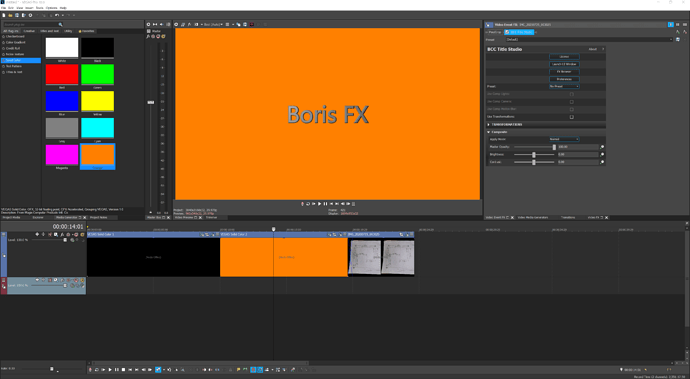 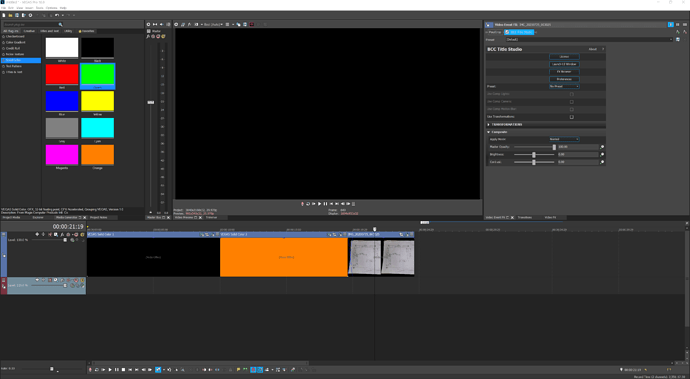 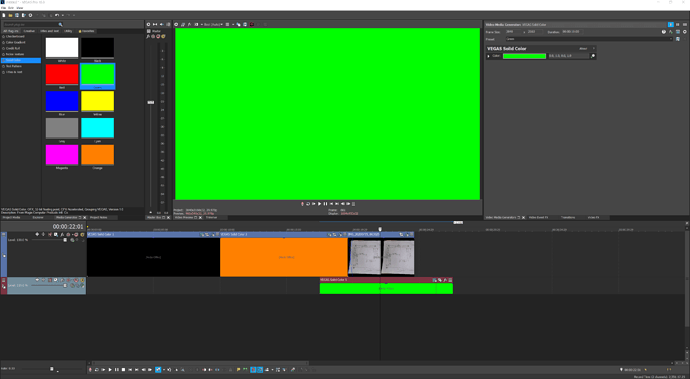 What happens if you add it to a Jpeg image of something?

I’ve tried Title Studio at the event level on both a .jpg and a .png. I get the default BorisFX title on the preview window, but the background image does not display. But in Vegas Pro’s Video Event FX window for Title Studio, changing the Composite ‘Apply Mode’ to Normal does work - the .jpg and .png images do display beneath the default title - and all looks as it should.

Hi, yeah same here, applying Title Studio straight to the clip on the timeline makes it go black but applied on the Track FX & set as Normal looks fine except as it happens, on my latest vid i have this image of a door, i wanted to create a transparent spline object & then use the Border tool to outline the door to highlight it, I’ve done it before no prob, but as soon as press play or i move the timeline marker to set keyframes etc, it freezes,
I had a ply last night with all sorts of things with Title Studio, different applying methods, Video F, Track FX etc, it’s hard to describe but it’s all a bit messed up & unusable
These images are as far as i can get before it crashes; 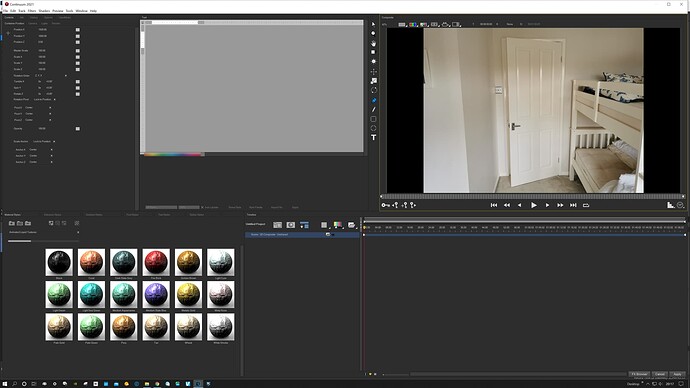 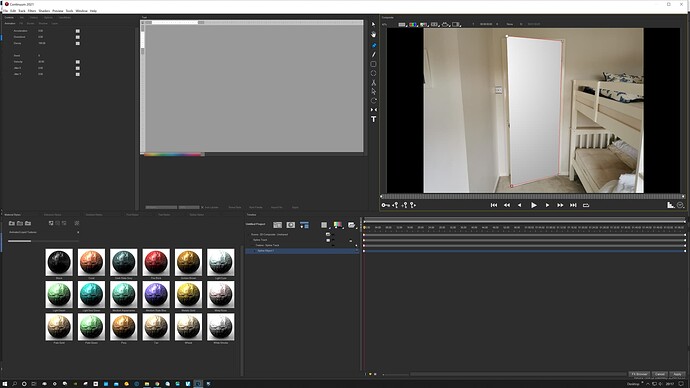 Jason, is there a revised target date to fix this?

We are aiming to post a fix within roughly a week.