Hi! New to Boris but previous keyframer. Just getting back to Hitfilm Express and I have the Boris 3D addon that includes Title Studio (Continuum 2019 12.0.1.3050). Hitfilm has completely reorganized so I don’t think I can upgrade my version. A few embarassingly simple questions for a newb:

Sorry for the basic questions - just trying to understand the implications of all this before I get too far along. Thanks for any tips.

Hi, you can zoom the timeline with the line next to the 3 buttons you mention, drag it or put your mouse over it & use the scroll wheel,
I think a lot of the stuff you mention will make more sense if you Search - Rigid Runs,
these can be added at the top of the timeline in TS, they allow the title to be stretched but the animation at the start & the finish gets locked stays the same length, , so back in Hitfilm the Title can be stretched as long as you want, the fade in & out or movement at the start & finish will remain the same length of time,
Hope that makes sense

PS just noticed you’d added Rigid runs to the bottom of your post.

Thanks for that. In the much maligned but non-optional Hitfilm Dark Mode I couldn’t even tell that that slider existed until you pointed it out. Any idea about the non-matching Hitfilm (30 FPS) and Title Studio (always 24 FPS) timeline. I’m doing an onscreen logo assembly for a musician (me) and I need to precisely time the onscreen events to beats of the music, so being off by 5 frames per second could be a disaster.

With Title Studio in HitFilm Pro, select Launch UI Window for BCC Title Studio in HF’s Effects control window. Then in Title Studio’s UI window, go to menu Edit/Project Settings and check the ‘Manually Specify Pixel Dimensions, FPS and PAR’ selection. You can then manually change the FPS field above to the FPS rate that you want (and any of the other fields should you so wish).

Interesting though because I’ve found that Title Studio usually defaults those settings to the project settings coded in the host NLE.

Thanks for replying. I found those settings but no matter what I manually set the FPS to the timeline in TS doesn’t change. So it still thinks 1 sec is 25 frames, no matter what I set it to. When I brought my 15 sec 30 FPS clip into TS, I now have an 18 second clip, which also reflects this. I found an earlier post which also showed the same thing

Another really basic stupid newby question. I have a photo in Hitfilm with a duration of 15 seconds which I add Title Studio to as an effect. I go into Title Studio UI and make a type-on extruded text Title with some tumbling, fading, etc, added. In preview in TS it looks perfect, I can preview the photo behind it and have positioned it, adjusted the lights, etc. When I go back to Hitfilm I get the type on animation on a black background. If I turn the effect visibility off I see the photo. So, I’m somehow not getting the alpha channel applied. Any hints - I’m going crazy trying to get this. The photo is a .jpg if that matters. I thought the alpha would be in the effect and wouldn’t depend on the photo. I put the photo in a Composite shot and then applied the effect but that didn’t help. I made a completely transparent plane within the Composite shot, applied the TS to that and it plays on a solid white screen - not much of an improvement. If I pause the viewer, then move the animated plane below the photo, then move the animated plane BACK on top of the photo, everything shows properly with just the type on animation superimposed on the photo. As soon as I hit play in the viewer I’m back to the animated title on a white screen with no sign of the photo underneath. Thanks for any hints.

EDIT - I exported it to see if it was just a problem with the viewer in Hitfilm - I get a movie that is almost entirely the type on animation on a white backgroup and then a quick flash of the picture at the end. 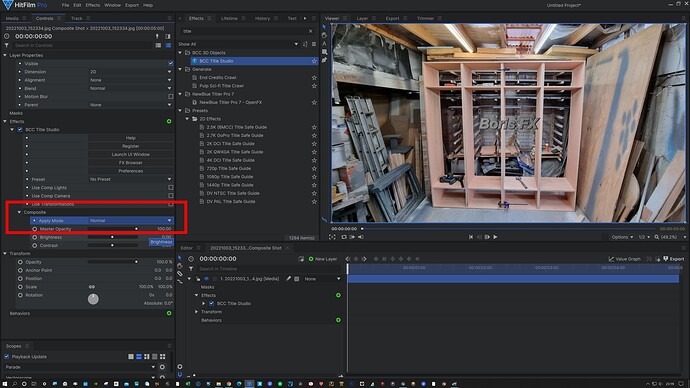 Don’t seem to have that! 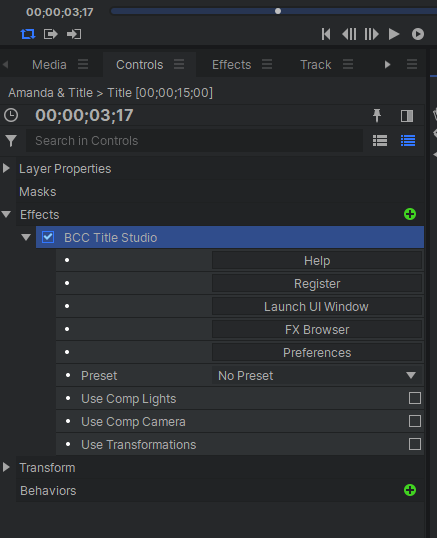 Sorry about that. Thanks very much for looking at this. Here’s the screen 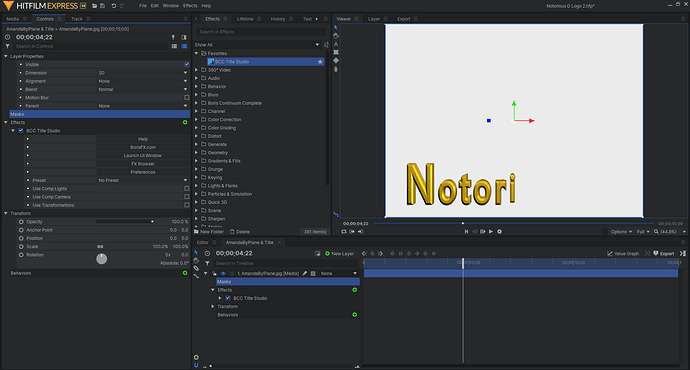 Here’s what it looks like in the Title Studio UI

I would guess, Dennis, that your version of Title Studio (Continuum 2019 12.0.1.3050) predates the addition of the built in Composite options Title Studio.

It looks like it, but this version worked for many years. Maybe my old Hitfilm version and my old Boris FX version are out of sync. I have no idea how I would determine that, let alone how I would go about fixing it. I got Hitfilm and bought Boris a few years ago and then life got busy and I never used it. Now I’m retired and have time to play but maybe I’ll have to move on from Hitfilm - I’m not a subscriber kind of guy. Maybe Boris can tell me the latest version that worked with Hitfilm and how I would upgrade to that.

Thanks for taking a look.

So, I have Hitfilm 14 with Content Creator and Boris addons, which I originally purchased in 2020. I can download the last v21.3 from my FXHome account with my addons - is there any reason I should go with an earlier version - I vaguely remember hearing on Reddit that 21.3 was unstable - is there a better version? I see that uptodown.com has 21.1 and Hitfilm 16 and 18. I’ve got lots of fast disk, 80Gb of ram and an RTX-3060 so maybe I’ll be okay with 21.3.

Thanks again for all your help.

Yea! DLed and installed 21.3 and set composite Apply Mode to Normal and now all is well. Thanks guys!